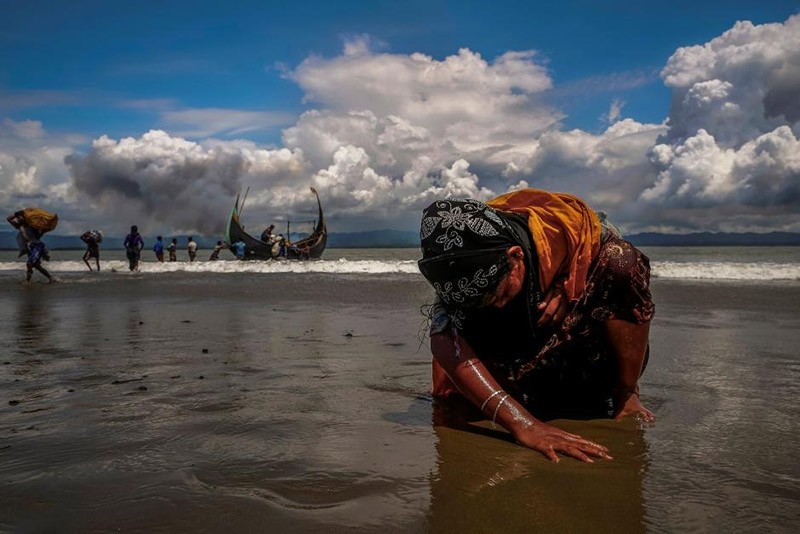 An exhausted Rohingya refugee woman touches the shore after crossing the Bangladesh-Myanmar border by boat through the Bay of Bengal, in Shah Porir Dwip, Bangladesh September 11, 2017. (Reuters Photo)
by Associated Press May 10, 2018 12:00 am

The U.N. Security Council urged Myanmar's government on Wednesday to fulfill its commitment to hold perpetrators of violence against Rohingya Muslims accountable and to address the root causes that led about 700,000 members of the ethnic minority to flee to Bangladesh.

The council press statement made no mention of the appeal by four human rights groups on Tuesday for the Security Council to refer Myanmar to the International Criminal Court for alleged crimes against humanity, including targeting the Rohingya.

The four rights groups — Amnesty International, Human Rights Watch, the Global Center for the Responsibility to Protect, and Fortify Rights — said Myanmar's government is incapable of bringing those responsible for such crimes to justice.

The council statement on Wednesday reaffirmed its most significant pronouncement on the Rohingya, a presidential statement it adopted in November.

That statement stressed "the importance of undertaking transparent investigations into allegations of human rights abuses and violations ... and of holding to account all those responsible for such acts to provide justice for victims."

Myanmar's military responded with counterinsurgency sweeps and was accused of widespread human rights violations, including rape, murder, torture and the burning of Rohingya homes. Thousands are believed to have died and the U.N. and U.S. officials have called the government's military campaign ethnic cleansing.

The Rohingya face official and social discrimination in predominantly Buddhist Myanmar, which denies most of them citizenship and basic rights because they are looked on as immigrants from Bangladesh, even though the families of many settled in Myanmar generations ago.

The Security Council statement said that during its trip members observed "widespread destruction of villages" in northern Rakhine State, and "were struck by the scale of the humanitarian crisis and remain gravely concerned by the current situation." It urged all countries to increase support to Bangladesh to care for the refugees.

The council said members noted Myanmar's efforts to prepare for the repatriation of refugees from Bangladesh and urged the government to create conditions conducive for their "safe, voluntary and dignified return" to their homes in Rakhine.

It welcomed Myanmar's commitment to work with the U.N. and urged the government to grant U.N. agencies and their partners, who have been barred from Rakhine, "immediate, safe and unhindered access."

The Security Council has scheduled an open briefing on the trip for May 14 and the statement said members intend to discuss in the coming days how it can work with both countries and the new U.N. special envoy "to resolve the crisis and create the conditions" for the Rohingya to return home.