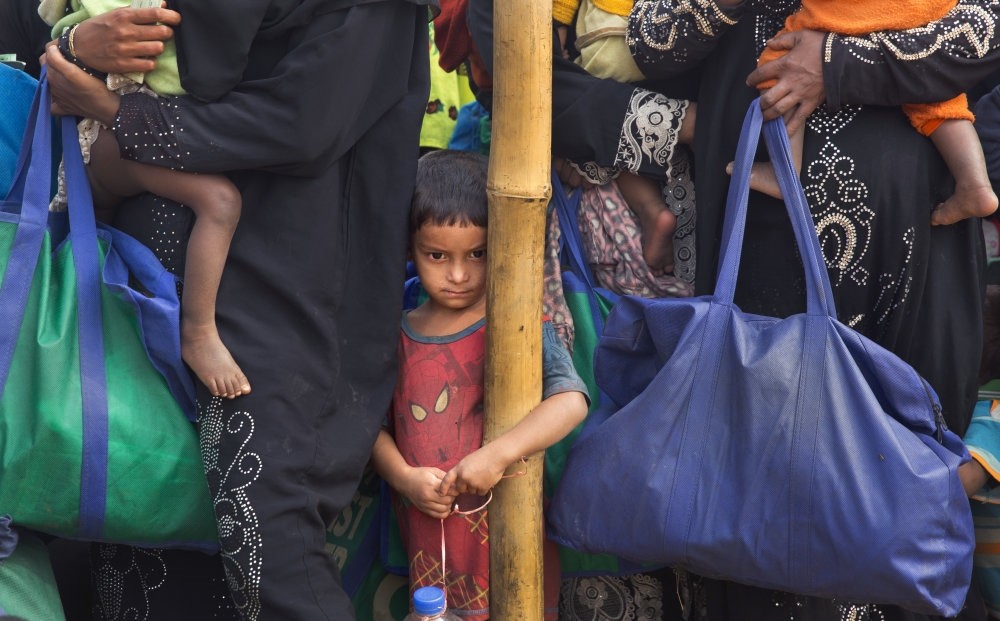 A Rohingya Muslim boy stands in a queue outside a food distribution center at Balukhali refugee camp, Cox's Bazar, Bangladesh, Jan. 15.
by Compiled from Wire Services May 18, 2018 12:00 am

Since the Rohingya crisis, more than 16,000 babies have been born amid appalling conditions in vast refugee camps in Bangladesh, according to UNICEF

Nearly 60 babies a day are being born in squalid refugee camps in southeastern Bangladesh where hundreds of thousands of Rohingya Muslims shelter, fleeing violence in neighboring Myanmar, the U.N. children's agency said yesterday.

UNICEF said in a statement that since the crisis began more than 16,000 babies had been born in the camps with only about 3,000 delivered in health facilities.

"Around 60 babies a day are taking their first breath in appalling conditions, away from home, to mothers who have survived displacement, violence, trauma and, at times, rape," said Edouard Beigbeder, UNICEF's Representative in Bangladesh.

UNICEF estimates that only one in five Rohingya children were delivered in health facilities established in the refugee camps. The agency has mobilized 250 community volunteers to make sure that the women visit health care facilities before and after giving birth.

A senior Bangladesh health ministry official, who declined to be named due to the sensitivity of the matter, said last week that so far 18,300 pregnant women had been identified in the camps and the rough total estimate was around 25,000.

Calls for the international community to take measures against the "visible genocide" facing Rohingya Muslims in Myanmar has increased as the monsoon season approaches. In March the United Nations launched an appeal for $951 million to help the Rohingya refugees for the rest of the year, but it is less than 20 percent funded.

At least 9,000 Rohingya were killed in Rakhine state from Aug. 25 to Sept. 24, according to Doctors without Borders. In a report last December, the global humanitarian group said the deaths of 71.7 percent, or 6,700 Rohingya, were caused by violence. The death toll includes 730 children below the age of 5.