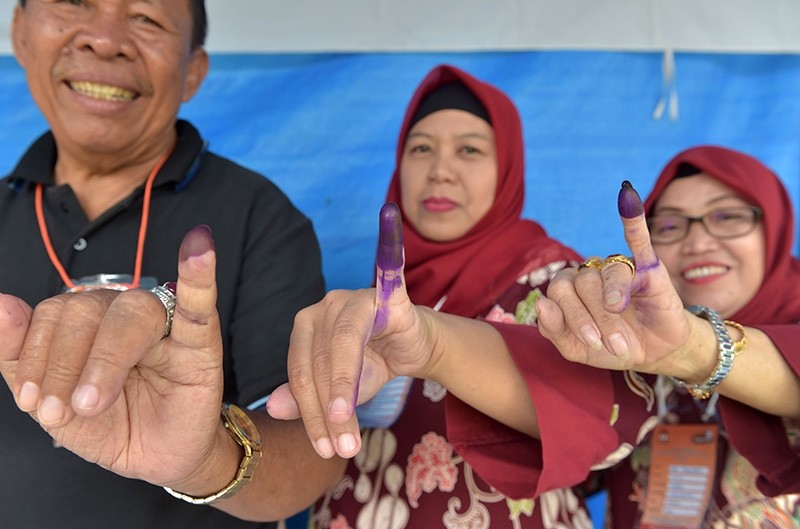 Indonesian people show their inked fingers after casting their ballots during regional elections in Tangerang, Banten on June 27, 2018. (AFP Photo)
by Compiled from Wire Services Jun 27, 2018 12:00 am

More than 150 million Indonesians were expected to head to the polls Wednesday in 171 elections for mayors, regents and governors, an important barometer ahead of presidential and parliamentary elections in 2019.

Some hardline leaders are publicly calling for the ousting of President Joko Widodo, who is expected to seek a second term.

Widodo has pledged to protect Indonesia's tradition of pluralism and moderate Islam in the officially secular country.

Opinion polls suggest candidates backed by parties supporting Widodo will win in key provinces like West Java, boosting his re-election chances in what is expected to be a re-run of the 2014 contest between Widodo and retired general Prabowo Subianto.

Quick counts, based on early tallies of a sample of votes, are expected to start coming in a few hours after polls close at 1 p.m. (0600 GMT) and have previously given an accurate assessment. Official results are expected on July 9.

The government has declared the day a national holiday to ensure maximum participation in the polls, which are a crucial test for parties ahead of next year's legislative and presidential elections.

Simultaneous regional elections have been held since 2015, partly to prevent candidates failing in one region to run again in another. Wednesday's elections have a budget of 11.3 trillion rupiah ($878,795).

Indonesia is on high alert after a series of suicide attacks in Surabaya city killed 30 people last month, in the deadliest terrorist attacks in over a decade.

Last week, one of Indonesia's highest-profile Daesh supporters was sentenced to death for his involvement in a series of attacks, and experts have warned of a risk of retaliatory attacks from his supporters.

National police and military have deployed over 170,000 personnel to secure the polls, as voters cast ballots in polling booths set up in schools, town halls and outdoor tents.

There have been no reports of unrest so far and police declared as false rumors on social media of voter intimidation in some parts of the country with sizeable ethnic Chinese communities.

At some voting stations in Java and on the resort island of Bali there was a festive feel, with polling booths decked out in a World Cup theme and election officials dressed in soccer jerseys.

More than 160 million people are registered to vote and over half of them are on Java, where West Java province's population of 47 million alone is roughly equivalent to Spain.