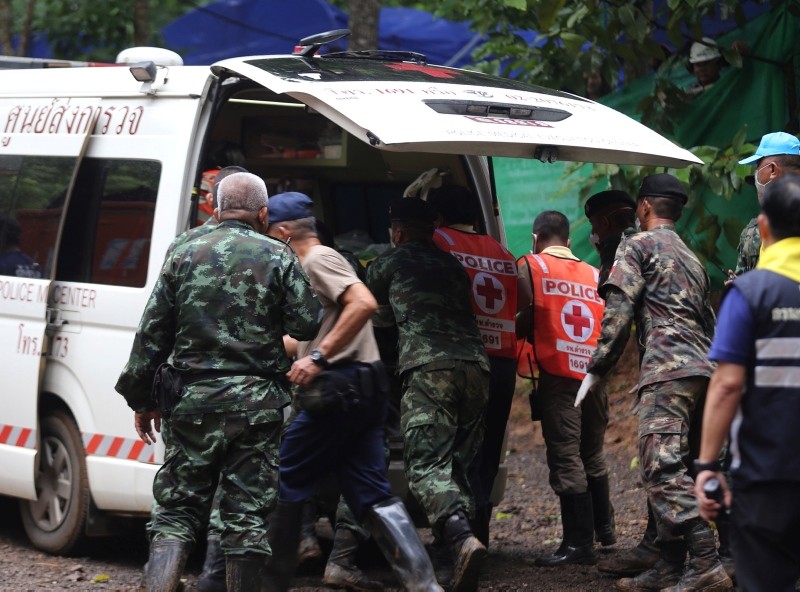 Eight of 13 members of a youth football team trapped in a cave in northern Thailand for more than two weeks have been rescued and sent to a local hospital, Thailand's navy SEAL division reports.

"2 days, 8 Wild Boars. Hooyah," the Thai Navy SEALs said in a post on their official Facebook page, referring to the boys and their coach by the name of their football team.

An aide to the Thai Navy SEAL commander said four boys were brought out of the flooded cave on Monday and the ongoing rescue operation is over for the day.

The aide, Sitthichai Klangpattana, didn't comment on the boys' health or say how well the operation has gone.

The boys and their 25-year-old coach have been trapped for more than two weeks after heavy rains flooded the kilometers- long cave network made up of caverns connected by tight passages.

Chiang Rai acting Gov. Narongsak Osatanakorn had said earlier Monday that the second phase began at 11 a.m. and authorities "hope to hear good news in the next few hours." Nine people remained trapped in the cave, including the team's coach, as of Monday morning.

"All conditions are still as good as they were yesterday," Narongsak told a news conference. "The boys' strength, the plan — today we are ready like before. And we will do it faster because we are afraid of the rain."

Authorities have been rushing to extract the boys, ages 11-16, and their coach from the cave as the annual monsoon bears down on the mountainous region in far northern Chiang Rai province. Workers have been laboring around the clock to pump water out of the cave, and authorities said Monday that heavy downpours overnight did not raise water levels inside.

The four boys pulled from the cave Sunday in an urgent and dangerous operation that involved them diving through the cave's dark, tight and twisting passages were happy and in good health, authorities said.

"This morning they said they were hungry and wanted to eat khao pad grapao," Narongsak said, referring to a Thai dish of meat fried with chili and basil and served over rice.

Still, the four were undergoing medical checks in a hospital in the provincial capital and were not yet allowed close contact with relatives due to fear of infections. Relatives were able to see them through a glass partition, the governor said.

The boys and their coach went exploring in the massive Tham Luang Nang Non cave on June 23 after a soccer practice, and were cut off when a rainstorm flooded the cave. A massive international search operation was launched and it took 10 days to locate the boys, who had taken shelter on a dry slope deep in the complex.

The search and rescue operation has riveted people both in Thailand and internationally, with journalists from across the globe traveling to this town along the border with Myanmar to report on the ordeal.

Interior Minister Anupong Paojinda had said early Monday that the same group of expert divers who took part in Sunday's rescue would return to extricate the others because they know the cave conditions and what to do. He had said fresh air tanks needed to be laid along the underwater route.

Authorities have said extracting the entire team from the cave could take up to four days, but Sunday's success raised hopes that it could be done faster.

Sunday's mission involved 13 foreign divers and five Thai navy SEALs. Two divers accompanied each of the boys, all of whom have been learning to dive only since July 2, when searchers found them.

Cave rescue experts have said they consider an underwater escape to be a last resort, especially with people untrained in diving.

The death Friday of a former Thai navy SEAL underscored the risks. The diver, the first fatality of the rescue effort, was working in a volunteer capacity and died on a mission to place air canisters along the passage to where the boys are, necessary for divers to safely travel the five- to six-hour route.

There were several concerns that prompted authorities to move forward with the plan to dive the boys out. One was that it was unknown how safe and dry the area where they had taken shelter would stay as Thailand's rainy season, which lasts until at least late October, picks up pace.

The other, and perhaps more worrying, was that oxygen levels in the complex were falling close to dangerous levels.

Officials have yet to confirm the identities of the four boys freed. Narongsak on Monday said their identities were being protected out of respect for the families of those still trapped inside the cave.

Officials last week said they would bring the fittest people in the group out first, but Narongsak later said that whoever was ready first would be escorted out.

A source involved in the rescue mission who saw two of the four boys walk out of the cave told Reuters that they looked tired but healthy, adding that one even looked "vivacious and fresh". He did not give further details.

"Imagine marathon runners. It's like when they reach the finish line exhausted," said the source.

Medical staff involved in the rescue mission told Reuters their first assessments when the boys arrive at the hospital will focus on their breathing, signs of hypothermia and an airborne lung infection known as 'cave disease' which is caused by bat and bird droppings and can be fatal if untreated and allowed to spread to other parts of the body.

The first four rescued boys have been placed in a ward set aside specifically for the cave rescue, a source at the hospital said.