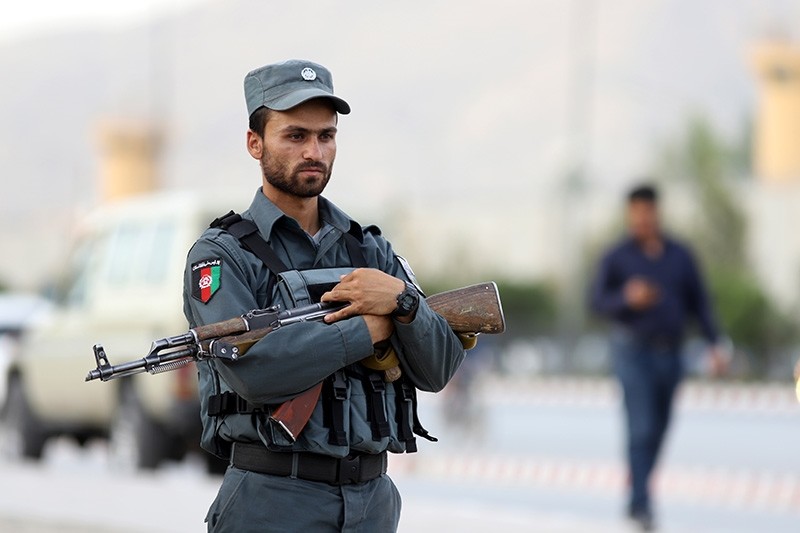 An Afghan security officer secures the scene of a suicide attack near the Ministry of Rural Rehabilitation in Kabul, Afghanistan, July 15, 2018. (EPA Photo)
by Jul 15, 2018 12:00 am

A suicide bomber blew himself up in front of a government ministry in Kabul on Sunday as workers were leaving their offices, killing at least seven people and wounding more than 15, officials said, in the latest deadly attack to rock the country.

The explosion outside the rural rehabilitation and development ministry -- the second time in as many months that its compound has been struck -- was carried out by the Daesh group, according to a report translated by the SITE monitoring agency.

It follows a series of recent attacks in the eastern city of Jalalabad that have killed dozens. Most of those assaults were claimed by Daesh.

Civilians and security forces were among the seven dead in Sunday's attack, police spokesman Hashmat Stanikzai said. The death toll was confirmed by an Afghan security source.

Ministry spokesman Fraidoon Azhand said the bomber struck at a security gate as employees were exiting the compound during rush hour.

But it was not clear whether the ministry was the target of the attack.

Stanikzai said security forces and a vehicle belonging to foreign advisers to the ministry were in the vicinity at the time of the attack.

The vehicle was damaged in the blast but there were no foreign casualties, he added.

The attacker was described as a "martyrdom-seeker" from Daesh in a report by the terrorists' propaganda agency Amaq citing an unnamed source, according to SITE.

On June 11 a bomber blew himself up as ministry workers queued for an early bus home during the holy month of Ramadan, killing at least 13 people and wounding 31.

Daesh claimed responsibility for that attack.

Sunday's blast came hours after a U.N. report was released showing a record number of civilians killed in the first six months of 2018, with militant attacks and suicide bombs the leading causes of death.

The toll of 1,692 fatalities was one percent more than a year earlier and the highest for the period since the United Nations Assistance Mission in Afghanistan (UNAMA) began keeping records in 2009.

Another 3,430 people were wounded in the war, down five percent from the same period last year, the report said.

UNAMA attributed 52 percent of those casualties to Daesh, mainly in Kabul and Nangarhar where the group established a stronghold after emerging in Afghanistan in 2014.

The Taliban were responsible for 40 percent.

While the Taliban are Afghanistan's largest militant group and holds or contests more territory than any other, Daesh has repeatedly demonstrated its ability to carry out devastating attacks in urban areas.