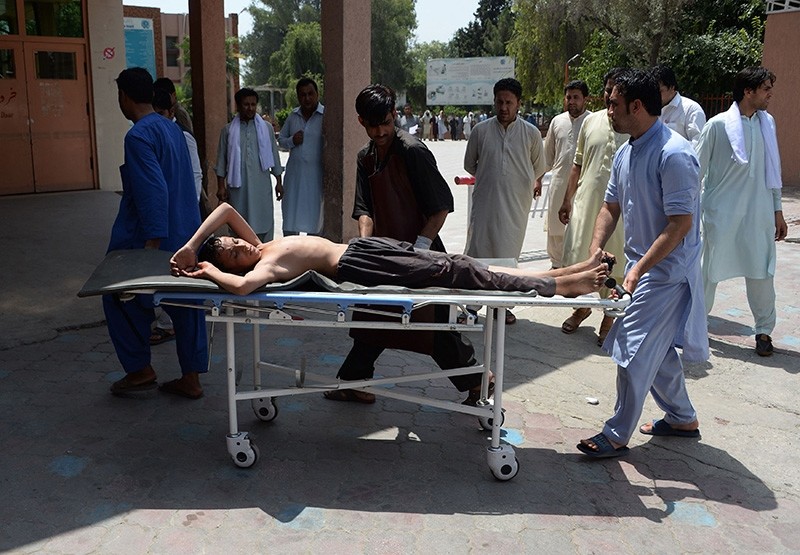 Afghan volunteers carry an injured youth on a stretcher to a hospital following an attack that targeted an education department compound in Jalalabad on July 11, 2018. (AFP Photo)
by Jul 15, 2018 12:00 am

The number of Afghan civilians killed in the country's long-running conflict hit a record high in the first six months of 2018, United Nations figures showed Sunday, with militant attacks and suicide bombs the leading causes of death.

The toll of 1,692 fatalities was one percent more than a year earlier and the highest for the period since the United Nations Assistance Mission in Afghanistan (UNAMA) began keeping records in 2009.

Another 3,430 people were wounded in the war, down five percent from the same period last year, the report said.

The record high death toll came despite an unprecedented ceasefire by Afghan security forces and the Taliban last month that was largely respected by both sides, UNAMA said.

The ceasefire for the first three days of Eid was marked by scenes of jubilation as security forces and Taliban fighters celebrated the Islamic holiday, raising hopes that peace was possible after nearly 17 years of conflict.

But the suspension of hostilities was marred by two suicide attacks in the eastern province of Nangarhar that killed dozens of people and were claimed by the Daesh terror group, which was not part of the ceasefire.

The Taliban refused a government request to extend the truce, returning to the battlefield and ignoring calls to enter talks with Kabul to end the war.

"The brief ceasefire demonstrated that the fighting can be stopped and that Afghan civilians no longer need to bear the brunt of the war," Tadamichi Yamamoto, the U.N. secretary-general's special representative for Afghanistan, said.

"We urge parties to seize all opportunities to find a peaceful settlement -- this is the best way that they can protect all civilians."

Suicide bombs and "complex" attacks that involve several militants accounted for 1,413 casualties -- 427 deaths and 986 injuries -- up 22 percent from a year earlier.

If that trend continues, the figure will top the 2017 full-year record of nearly 2,300 casualties.

UNAMA attributed 52 percent of civilian casualties from suicide and complex attacks to Daesh, mainly in Kabul and Nangarhar where the group established a stronghold after emerging in Afghanistan in 2014.

The Taliban was responsible for 40 percent.

While the Taliban is Afghanistan's largest militant group and holds or contests more territory than any other, Daesh has repeatedly demonstrated its ability to carry out devastating attacks in urban areas.

Civilians have paid a heavy toll for the intensified aerial bombing campaign, with 353 casualties recorded in the first half of the year, up 52 percent on last year, UNAMA said.

More than half of the civilian casualties were caused by the Afghan Air Force.

One of the worst incidents was in the northern province of Kunduz in April when an Afghan air strike on an outdoor religious gathering killed or wounded 107 people, mostly children, a previous UNAMA report found.

The government and military said it had targeted a Taliban base where senior members of the group were planning attacks.

UNAMA also recorded 341 civilian casualties in election-related violence -- a trend that is expected to worsen as the Oct. 20 legislative ballot draws closer.