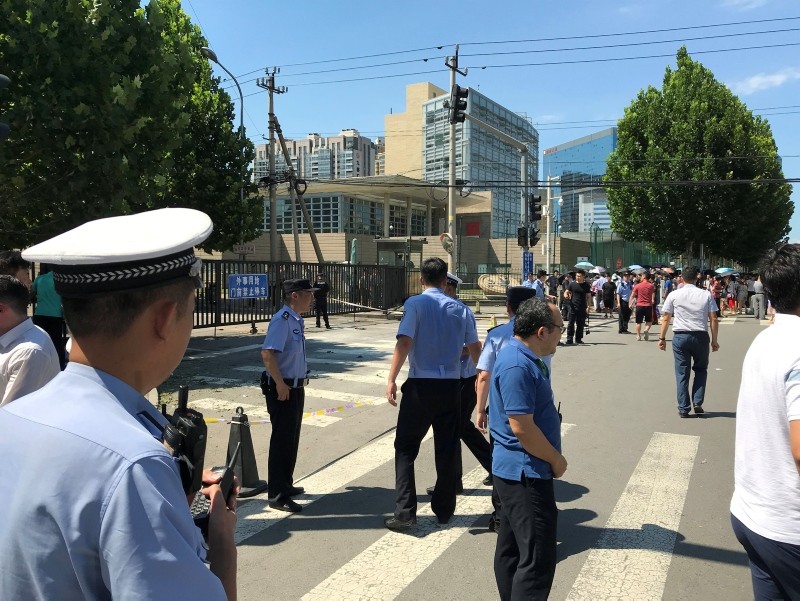 A man exploded a small homemade bomb outside the U.S. Embassy in Beijing on Thursday, injuring only himself, according to police and an embassy spokesperson.

Photos on social media showed a large amount of smoke and police vehicles surrounding the embassy shortly after the incident. Apart from a heightened security presence, the scene outside appeared to be normal by early afternoon.

The Beijing Police Department posted a statement on its website identifying the suspect only by his surname, Jiang, and said he was 26 years old and a native of Tongliao city in the Chinese region of Inner Mongolia. He was injured on the hand by the explosive device, which was made from fireworks and was detonated at about 1 p.m., police said.

There was no word on a motive and the statement said the investigation was continuing.

No damage was done to embassy property and no other injuries were recorded, a U.S. embassy spokesperson said, speaking on routine condition of anonymity.

Only one person was involved and police responded to the situation, the spokesperson said.

The state-run Global Times previously reported that Chinese police reportedly took away a woman who sprayed herself with gasoline in what was suspected to be a self-immolation attempt outside the US Embassy, amid reports of an explosion.

A Reuters witness saw Chinese police examining a vehicle outside the embassy.

Another witness said there were seven to eight police vehicles near the embassy and the road next to the complex had been closed off.

The diplomatic area where the incident took place is on the outskirts of Beijing and home to several embassies, including those of the United States, India and Israel.

China and the U.S. are in the middle of a trade dispute, but America remains a hugely popular destination for travel, education and immigration for Chinese.

On weekdays, large lines of visa applicants form outside the embassy, which sits in a busy corner of the city hosting numerous diplomatic installations as well as hotels and stores.