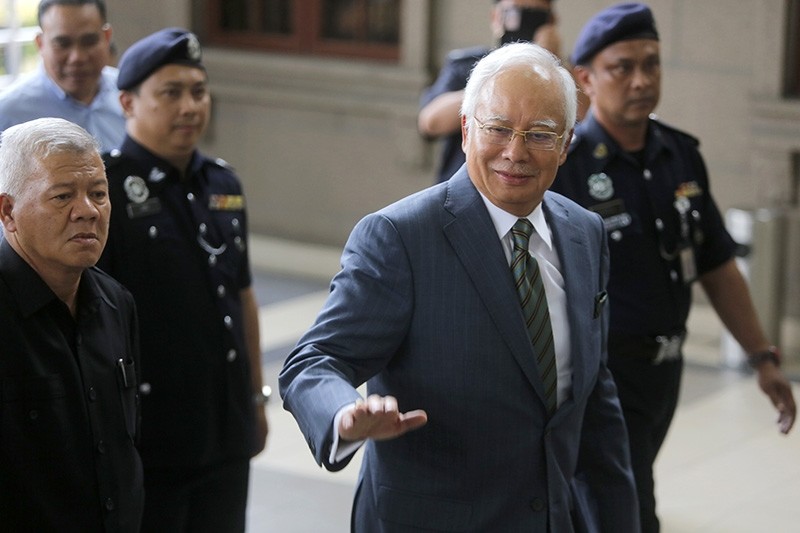 Dressed in a gray suit, Najib was calm and spoke softly as he entered his plea in the High Court. He has previously accused Malaysia's new government of seeking political vengeance and vowed to clear his name in his trial.

Najib, 65, had pleaded not guilty last month to abuse of power and three counts of criminal breach of trust.

All of the charges against him involve the transfer of 42 million ringgit ($10.3 million) into his bank accounts from SRC International, a former unit of the 1MDB fund that international investigators say was looted of billions by Najib's associates.

Najib set up 1MDB when he took power in 2009 for the stated purpose of promoting economic development, but the fund amassed billions in debts and is being investigated in the U.S. and several other countries for alleged cross-border embezzlement and money laundering.

After leaked documents exposed the scandal, Najib sacked critics in his government, muzzled the media and quashed investigations. Public anger contributed to the defeat of Najib's long-ruling coalition in May 9 elections and ushered in the first change of power since Malaysia gained independence from Britain in 1957.

The new government, led by Prime Minister Mahathir Mohamad, reopened the investigations stifled under Najib's rule and barred him and his wife from leaving the country. Police also seized jewelry and valuables valued at more than 1.1 billion ringgit ($270.2 million) from properties linked to Najib.

His case Wednesday was heard by a new judge after the previous judge, who is the brother of a senior official in Najib's Malay party, was transferred to another court.

Najib's lawyer Muhammad Shafee Abdullah questioned why the previous judge was suddenly transferred out even though there were no applications to remove him. Prosecutors said the transfer of judges was a normal procedure.

The court will resume Friday to hear a bid by Shafee for a gag order to bar the media from reporting on the merits of the case. The judge is expected to set trial dates then.