Half of Afghanistan out of goverrnment control, US special inspector's report says 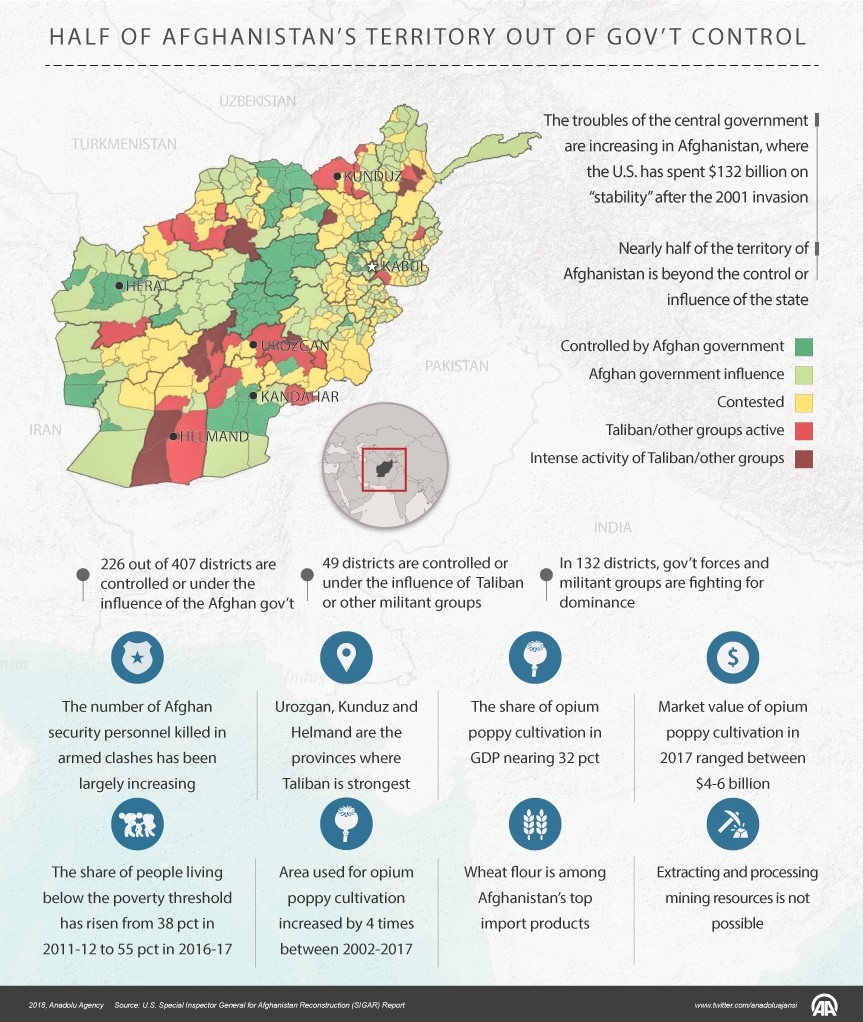 In Afghanistan, the domination of the central administration -- which was restructured following the U.S. invasion of Afghanistan in 2001-- has been in decline whereas the opium production has increased significantly and rapidly.

Approximately half of the country is currently controlled by organizations other than the central administration, according to a report presented to the U.S. Congress by John Sopko, the U.S. Special Inspector General for Afghanistan Reconstruction (SIGAR).

The supervising body that started operating in 2008 in Afghanistan follows the development and reconstruction projects, listening to the demands and complaints of the people.

The report made a general evaluation of the safety, public institution performance and the U.S. expenditures in Afghanistan. It was pointed out that the U.S., since the invasion, has spent $132 billion in the country, however, the poverty rate has increased.

The report, delivering the data of NATO's Resolute Support Mission in Afghanistan, highlighted that the number of districts under the control/influence of the Afghan government has declined by 16 percent since November 2015. Taliban and other organizations, on the other hand, increased their control/influence by 5.5 percent. In addition, the disputed areas have increased by 11 percent.

The Afghan state has control over 226 of 407 districts countrywide, and these districts are home to some 21.7 million people, 65 percent of the population.

Taliban and other organizations have control/influence on 49 districts. However, the most radical change occurs in the districts where conflicting sides fail to gain the upper hand. The government forces and organizations are fighting for dominance in 132 districts, meaning 32.4 percent of the districts.

The report said that both the U.S. and Afghanistan administrations have acknowledged that sustainable peace and safety within Afghanistan can be achieved with reconciliation and political settlement with the Taliban.

Urozgan, Kunduz and Helmand are the provinces where the Taliban are the most powerful. It was noted that 67 percent of the security incidents in Afghanistan took place in these three provinces.

The security conditions in northern Afghanistan deteriorates day by day. The conflicts in Balkh, Jowzjan and Faryab continue to increase. The Taliban seized three districts in Faryab. The surrender of more than 250 Daesh members in Jowzjan to government forces have strengthened Taliban's control.

According to Sept. 30, 2018 data, the U.S. allocated $83.14 billion for the Afghan National Security Defense Forces, corresponding to 63 percent of all reconstruction funding the U.S. has provided since 2002.

As of July 2018, Afghanistan's security forces include some 312,000 security personnel, 194,000 of whom are in the national army whereas 118,000 in police force. The personnel figures have declined by nine thousand in the past year.

From 2002 to September 2018, the U.S. has assisted the Afghan government with an average of $1.5 million per day within the frame of fight against drugs, accounting for a total of $8.8 billion.

According to the United Nations Office on Drugs and Crime (UNODC), the land used for the cultivation of opium poppy in Afghanistan has increased to 328,000 hectares, which was 201,000 hectares in 2016.

Opium production fields have expanded by more than four times since the 2002 invasion by the U.S. The market value of the opium produced in Afghanistan is estimated to be $4.1-$6.6 billion.

UNODC points out that the revenue obtained through opium production is equal to 19-32 percent of the gross domestic product (GDP) of Afghanistan.

According to the UN figures provided in the report, 275,000 Afghans have been displaced due to drought, which is 52,000 more than those who had to leave their homes due to conflicts.

In May 2018, UN had described the drought in the country as "the worst in recent years" and announced that some 2.2 million citizens were adversely affected. Those living under the poverty line were 38 percent in 2011-2012, however, it climbed to 55 percent in 2016-2017.

The International Monetary Fund (IMF) foresees an economic growth of 2.3 percent in Afghanistan amid its fight against natural challenges.

International Organization for Migration (IOM) reported that around 552,000 undocumented Afghans have returned from Iran in 2018, the highest rate of all times.

The number of Afghan refugees leading to EU has decreased in comparison with the 2015-2016 figures. Rigid border controls and asylum-seeker laws were reported to be among the major reasons for the decline.

The situation in Pakistan, where the highest number of Afghan migrants are located, seems more pleasant. The newly elected Prime Minister Imran Khan had announced that the Afghan and Bangladeshi people born in Pakistan were to be granted Pakistan citizenship.

In the first two quarters of this year, India has been the leading stop for Afghan exports with 45 percent whereas Pakistan came second with 34 percent.

As for imports, during the same period, Pakistan ranked first with 16.1 and Iran was second with 15.5 percent. Afghanistan received 14 percent of imports from China, 11.3 from Kazakhstan and 9.2 from Uzbekistan.

The report also stressed that Afghanistan was rich in terms of natural resources such as gold, chromite, copper, talc, sulfur, lead, iron, coal, construction stone and natural gas. Despite the potential wealth and abundance of resources, the Afghan government or private sector are far from extract or process large-scale ores.