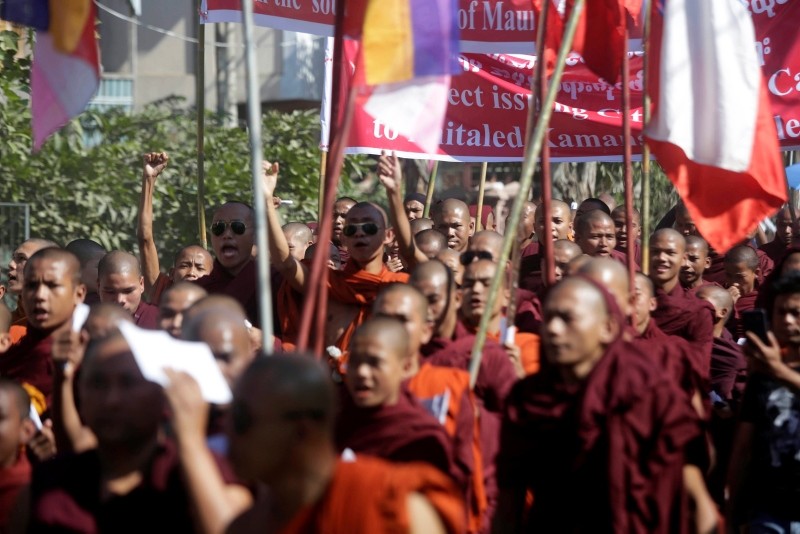 Protesters in Myanmar's troubled Rakhine State demonstrated Sunday against the planned repatriation of Rohingya Muslims from Bangladesh, referring to them as "runaway refugees."

"All the people of the nation are responsible to protect the security of the country," one monk said, according to a Facebook live streaming of the protest.

"There will be no benefits to us or our country if we accept the Bengalis," he added, using a derogatory term for the Rohingya that falsely implies they are newcomers from Bangladesh.

The demonstration comes 10 days after Bangladesh and Myanmar were supposed to officially start repatriating members of the Rohingya minority who had fled violent military operations in August 2017.

Rohingya refugees in Bangladesh said Myanmar's armed forces raped women, murdered their relatives and burned down their houses in a bid to drive them out of the country for good after decades of persecution.

The deal to bring them back was struck a year ago but Rohingya in the camps fear returning without guarantees of citizenship, safety, and equal access to healthcare and education.

But they also are wary of hostility from the non-Muslim residents in Rakhine, many of whom are not eager for the Rohingya to return.

The Buddhist protesters in Sittwe on Sunday reflected that view, holding signs that included calls on authorities to "take action" against illegal immigrants and to not "allow resettling (of) the runaway refugees" in parts of northern Rakhine state.

U.N. investigators have called for Myanmar's top brass to be prosecuted on charges of genocide at the International Criminal Court or an ad hoc tribunal.

Demonstrations against the Rohingya are not uncommon in Sittwe, where intercommunal violence broke out in 2012, killing hundreds and sending more than 120,000 Rohingya into internal displacement camps where most remain today.