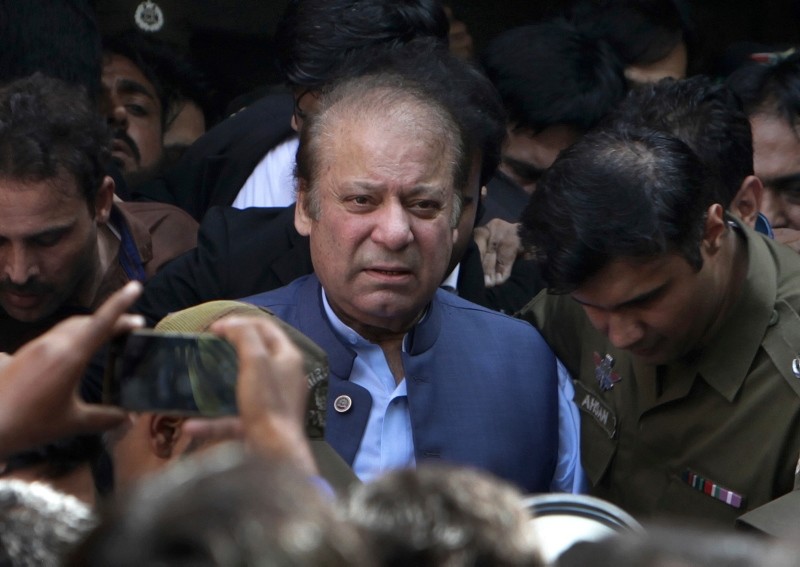 Sharif himself was present in the accountability court in the capital Islamabad to hear the much-anticipated verdict after a 15-month legal process in the cases, popularly known as Al Azizia Steel Mills.

The court acquitted him in the case of Flagship Investments, but in the other cases, he was fined the equivalent of $25 million. After the verdict was announced, Sharif was taken into custody in the court room.

In September 2017, directed by Pakistan's Supreme Court, anti-corruption watchdog the National Accountability Bureau (NAB) accused Sharif of hiding assets in Saudi Arabia and the UAE in the name of his then-underage sons during his first two tenures as premier in the early 1990s.

Sharif, however, denied the charges, accusing the government and the establishment -- a term coined to designate the country's powerful army -- of unleashing "selective justice" against his party and family.

The court last week rejected Sharif's request for postponement of the verdict for a week, as he wanted to submit some more evidence to bolster his case.

Sharif said he had never misused his power as prime minister of Pakistan or chief minister of Punjab province.

Speaking with reporters inside the courtroom after the verdict was announced, Sharif said, "I am satisfied with life, because as a ruler I always served the nation and my country."

Sharif denied even a single penny's worth of corruption during his political career.

The Pakistan Muslim League-Nawaz (PML-N), the party co-founded by Sharif, rejected the "unjust" verdict, vowing to fight it.

"We respect the courts, but this verdict is based on assumptions without any evidence," former Premier Shahid Khaqan Abbasi told reporters outside the court, adding that the country is being run through democratic martial law.

Abbasi said the world would laugh at this verdict convicting a person without any evidence.

He said his party would launch nationwide peaceful protests and also raise its voice inside parliament against this "injustice."

Abbasi said his party would challenge today's verdict in higher court and expressed hope to get justice.

Earlier, clashes erupted between the police and PML-N workers outside the courthouse when a huge crowd of Sharif supporters tried to enter the building.

Police used tear gas and charged the PML-N workers with batons to disperse them.

Hundreds of police paramilitary troops -- many of them carrying anti-riot shields -- surrounded the court from early in the morning to hold off Sharif's supporters, who gathered in large numbers.

Only a few party leaders and journalists were allowed to enter the small courtroom -- already packed to capacity by lawyers and the judicial staff.

This May Sharif, 68, had also been sentenced to 10 years in jail in a corruption case stemming from the whistleblower Panama papers scandal by an accountability court, but the Islamabad High Court suspended the conviction in September.

His daughter and political heir Maryam Nawaz and son-in-law Captain Mohammad Safdar had also been sentenced to seven years and one year in prison respectively in the same case. The two are also on bail.

In July 2017, Nawaz Sharif was disqualified from office by the Supreme Court over the Panama Papers scandal, which also led to the filing of three corruption cases. Not long after, the top court also barred him from holding his party's leadership.

Despite the arrests and clear opposition from the establishment, Sharif's party placed second in general elections this July, securing 82 seats in the 342-seat lower house.

The party bounced back in by-elections in October, clinching some key seats won by Prime Minister Imran Khan's Pakistan Tehreek-e-Insaf (PTI) in the general elections. It included a seat won by Khan himself from Lahore in July.