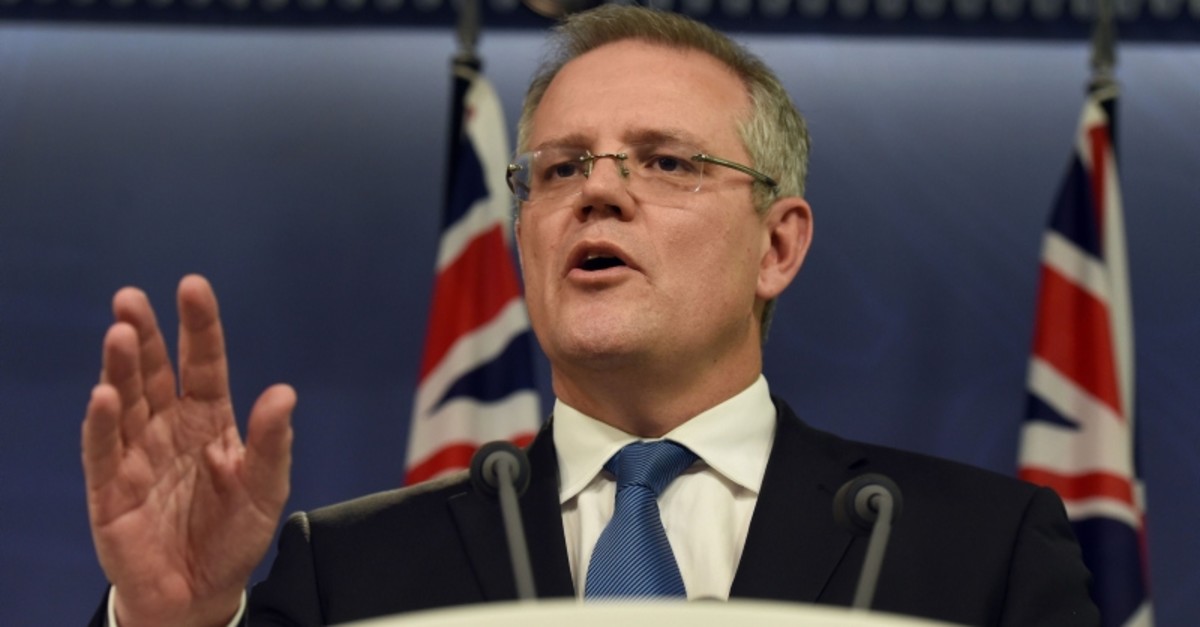 Australia's prime minister said on Thursday he won't put officials in danger by retrieving terrorists from the Middle East after an Australian Daesh group widow asked to bring her children home from a Syrian refugee camp.

Prime Minister Scott Morrison's response came after the Australian Broadcasting Corp. interviewed the woman in one of the refugee camps in northern Syria where she has lived with her toddler son and malnourished 6-month-old daughter since they fled the Syrian village of Baghouz where the Daesh group has been making its last stand.

ABC said the 24-year-old woman refused to confirm her identity and wore a veil during the interview, but it identified her Thursday as Zehra Duman.

The woman said her daughter needs hospital treatment and she wanted to bring her back to Australia.

"Nobody really cares about us here, and I understand the anger that they have toward a lot of us here," the woman told ABC, referring to the U.S.-backed People's Protection Units (YPG) terrorists' treatment of tens of thousands of her fellow Daesh supporters in the camps.

"But the kids don't need to suffer," she added.

Morrison said Australians who take their families to war zones to fight with the Daesh movement had to take responsibility for their actions.

"The great tragedy of those who went and joined up with terrorists — to support terrorist causes through [Daesh] and have taken their families into warzones where they're basically fighting against Australia — is they have placed their children in this horrendous position." Morrison told reporters.

"I'm not going to put any Australian at risk to try to extract people from those situations," he added.

Deakin University security expert Greg Barton said the government could no longer use the excuse of risk for failing to repatriate Australian terrorists as Australia rightly did when the terrorists were in territory controlled by Daesh fighters.

"Care would need to be taken bringing her back, but it's entirely do-able," Barton said. "We more than most countries can deal with this."

Western countries were reluctant to bring their nationals home from the Middle East since the Daesh caliphate collapsed because most countries struggled to gather evidence to prove them guilty of an offense, Barton said.

But Australia got around that burden of evidence in 2014 when a new law made simply being inside Daesh-held territory in Syria and Iraq a crime punishable by 10 years in prison. The onus is on Australians who visit designated Daesh-held areas to prove they had reasonable excuses.

No one has yet been prosecuted under the law.

Barton said Morrison wouldn't bring the family home before elections due in May because the prime minister thought that would be politically unpopular.

Morrison said any Australian citizen who returned from supporting Daesh fighters would "face the full force of Australian law."

Opposition leader Bill Shorten, whom opinion polls suggest will likely be prime minister after the May elections, said his party would work constructively with the government on repatriating Australian children from Syria without "political point-scoring."

"We'll work it through. Do you separate kids from their parents? Who's going to look after them?" Shorten said to reporters.

Duman said on social media she gave up her middle-class life in the Australian city of Melbourne where she was part of a Turkish-Australian family for the battlefields of Syria in late 2014.

She had followed Daesh soldier Mahmoud Abdullatif who had left Melbourne months earlier for the Raqqa, the Daesh movement's center in Syria.

The couple announced their wedding online in December 2014, with a photograph of her dowry that included an assault rifle.

Duman, who began calling herself Zehra Abdullatif or Umm Abdullatif, said her 23-year-old husband died five weeks after their wedding.

The former private school student became an avid online recruiter for the movement and urged other women to join her.

When asked on Twitter in early 2015 what she missed about Australia, her reply was simple and numeric: "0"