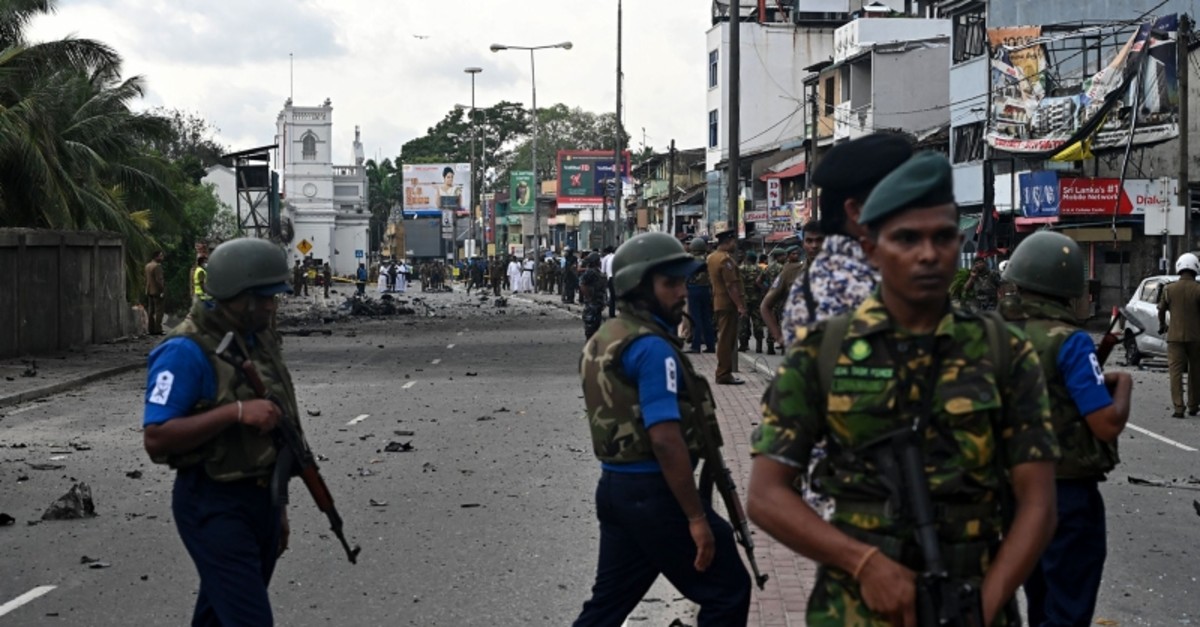 Sri Lankan soldiers stand guard as security personnel inspect the debris of a car after it explodes when police tried to defuse a bomb near St. Anthony's Shrine in Colombo on April 22, 2019. (AFP Photo)
by Apr 23, 2019 12:54 am

Sri Lanka on Tuesday imposed a state of emergency hours after the government blamed a local terrorist group for a series of suicide bomb blasts that killed at least 290 people, including dozens of foreigners.

Twenty-four people have been arrested over the coordinated Easter Sunday assault on multiple churches and hotels in the capital Colombo and beyond, authorities said.

The carnage — which also left some 500 people injured — was the worst atrocity since the South Asian country's civil war ended a decade ago.

The attacks were also the worst ever against Sri Lanka's small Christian minority, who make up just seven percent of the country's population of 21 million.

The spokesman added that it was not possible for such "a small organization" to carry out such well-coordinated suicide strikes.

The state of emergency, which gave police and the military special powers to counter militant strikes, came into force at midnight (1830 GMT Monday). Suspects can be detained without a court order.

The country was already observing a second straight night-time curfew since the attacks.

Officials are also investigating why more precautions were not taken after an April 11 warning from Sri Lanka's police that a "foreign intelligence agency" had reported the NTJ planned suicide attacks on churches.

Senaratne said that warning was not passed on to Prime Minister Ranil Wickremesinghe or other top ministers.

"Intelligence sections have reported that there are international terror groups which are behind local terrorists," President Maithripala Sirisena's office said in a statement.

Sirisena was due to meet with foreign diplomats on Tuesday "to seek international assistance to combat terrorism", his office said.

Tensions remained high, with a bomb detonating as police prepared to defuse it near one of the targeted churches. Although there was a powerful blast, no injuries were reported.

The toll rose dramatically Monday to at least 290 dead.

A police source told AFP that at least 37 foreigners were killed, while the tourism minister put that figure at 39 and the foreign ministry said there were 31 foreigners among the fatalities.

That number was likely to shift again, as the United States reported at least four Americans killed — including a young student — and the Netherlands raised their toll to three.

A Danish billionaire lost three of his children in the attacks, a spokesman for his company said.

Several of those killed were dual nationals.

The suicide bombers hit three Colombo luxury hotels popular with foreign tourists — the Cinnamon Grand, the Shangri-La and the Kingsbury — and three churches: two in the Colombo region and one in the eastern city of Batticaloa.

Interpol said it was deploying investigators and specialists to Sri Lanka, and the US State Department warned of possible further attacks in a travel advisory.

"This is America's fight, too," US Secretary of State Mike Pompeo told reporters in Washington.

Ethnic and religious violence has plagued Sri Lanka for decades, with a 37-year conflict with Tamil rebels followed by an upswing in recent years in clashes between the Buddhist majority and Muslims.

A memorial service and funeral were to be held Tuesday at St Sebastian's church in Negombo, north of Colombo, where more than 100 people were killed Sunday.

Among the dead were friends of 16-year-old Primasha Fernando, who was at her home nearby when the suicide bomber struck.

"When I got to the church, there were people crying and screaming," she told AFP.

"I saw bodies everywhere," she added in tears. "I saw parents carrying their dead babies."

At a government morgue in Colombo, relatives endured the gruesome task of identifying their loved ones.

Janaka Shaktivel, 28, father of an 18-month-old son, sat in shock outside the building waiting for the body of his wife to be handed over.

He said he escaped the blast at St Anthony's Shrine in Colombo because the baby had started crying and he had to go outside.

"I recognized her body from the wedding ring that she always wore," he said. "I have no words to explain my feelings."

The attacks drew global condemnation, including from US President Donald Trump and the pope.