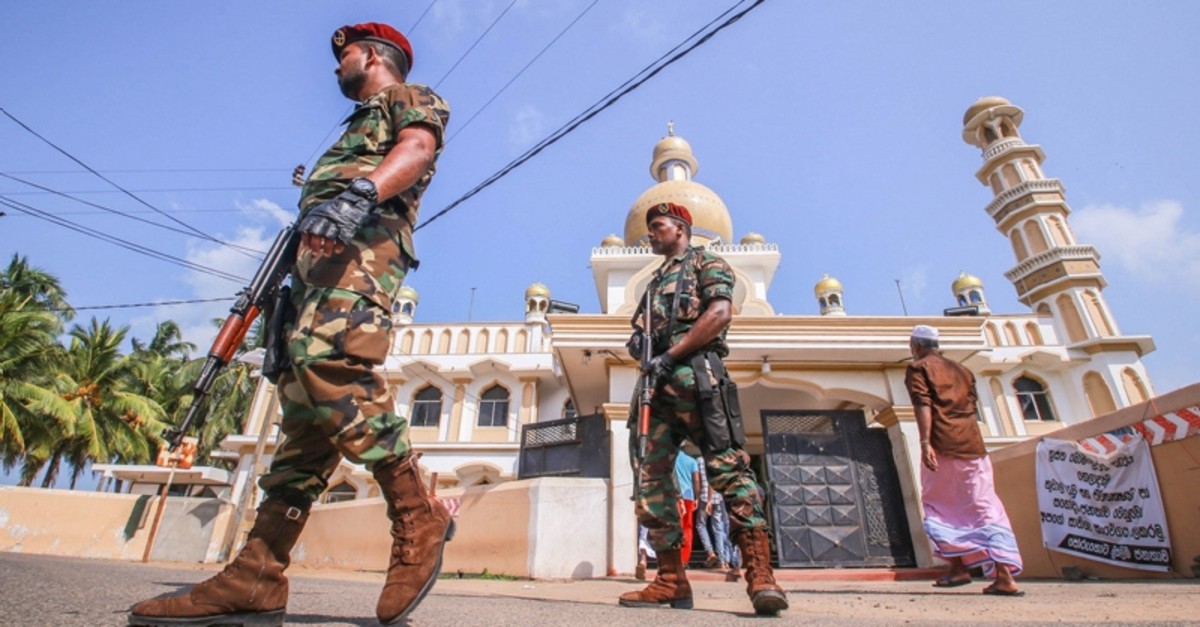 Sri Lankan military stand guard outside a mosque after clashes between two sectarian groups in a beachside resort in Poruthota village in Negombo, Sri Lanka May 6, 2019. (Reuters Photo)
by Compiled from Wire Services May 13, 2019 12:11 pm

Sri Lanka on Monday temporarily blocked some social media networks and messaging apps, including Facebook and WhatsApp, after attacks on mosques and Muslim-owned businesses in in the latest fallout from the Easter Sunday suicide attacks.

The island nation has ramped up security as fears grow that minority Muslims among its population of 22 million could face sectarian violence after terrorists blew themselves up in four hotels and three churches, killing more than 250 people.

A state of emergency has been in place since the bombings — which Daesh claims to have helped — and security forces have been given sweeping powers to arrest and detain suspects for long periods.

"The decision to ban social media sites had been taken in an effort to stop the spread of rumors following the violence that erupted in Chilaw and Kuliyapitiya towns on [Sunday] evening," the newspaper reported, quoting the statement issued by the Sri Lankan government information department.

Several dozen people threw stones at mosques and Muslim-owned stores and a man was beaten in the Christian-majority town of Chilaw on the west coast on Sunday in a dispute that started on Facebook, police sources and residents told Reuters.

Authorities said they arrested the author of a Facebook post, identified as 38-year-old Abdul Hameed Mohamed Hasmar, whose online comment "1 day u will cry" people said was interpreted as threatening violence.

Later on Sunday and early on Monday authorities arrested a group of men in the nearby district of Kurunegala for allegedly attacking Muslim-owned businesses, a police source told Reuters.

"To control the situation, a police curfew was imposed during the night," Atapattu added.

Several mosques and Muslim homes were damaged in the attack in the district, the Muslim Council of Sri Lanka said, but the precise extent of damage and the number of arrests was not immediately clear.

The attacks escalated in the absence of immediate police action, said one resident of the area and a mosque official, who both spoke to Reuters on condition of anonymity.

"The attack continued for nearly two hours and they attacked one house also in the village. There were hundreds of attackers," said a resident of the region's Muslim-majority town of Kiniyama, which is surrounded by Buddhist villages.

The main mosque was attacked, a copy of the Koran, the Muslim holy book dragged along the ground and two motorcycles parked nearby were burned, he added.

A mosque official in Kiniyama said the attacks were triggered when several people, including some Buddhist monks, demanded a search of a 105-acre (43-hectare) pond near the main mosque.

"When Muslims tried to prevent the attack, we were asked by police to go inside," the official said.

Police in the area were not immediately available to comment.

Since the bombings, Muslim groups say they have received dozens of complaints about people being harassed.

Other communities in the multi-ethnic nation say they fear the government, which failed to act on successive warnings about looming attacks, has not caught all potential militants.

A violent clash between Muslims and Christians erupted a week ago in the west coast city of Negombo, the site of one of the suicide attacks that killed more than 100 people during Easter prayers.

The government also imposed a ban on social media after that clash.

Dozens of people have been detained since the Easter Sunday attacks, and amid the heightened security, police have banned parking near schools and students are allowed in after checking for explosives.

Public schools completed their reopening from extended Easter holidays after the attacks, but attendance was low, according to education authorities.

Private Catholic schools were to open on Tuesday, but many were planning to postpone the reopening until next week, parent groups said.

Muslims make up around 10 percent of Buddhist-majority Sri Lanka's 21 million population and Christians about 7.6 percent.