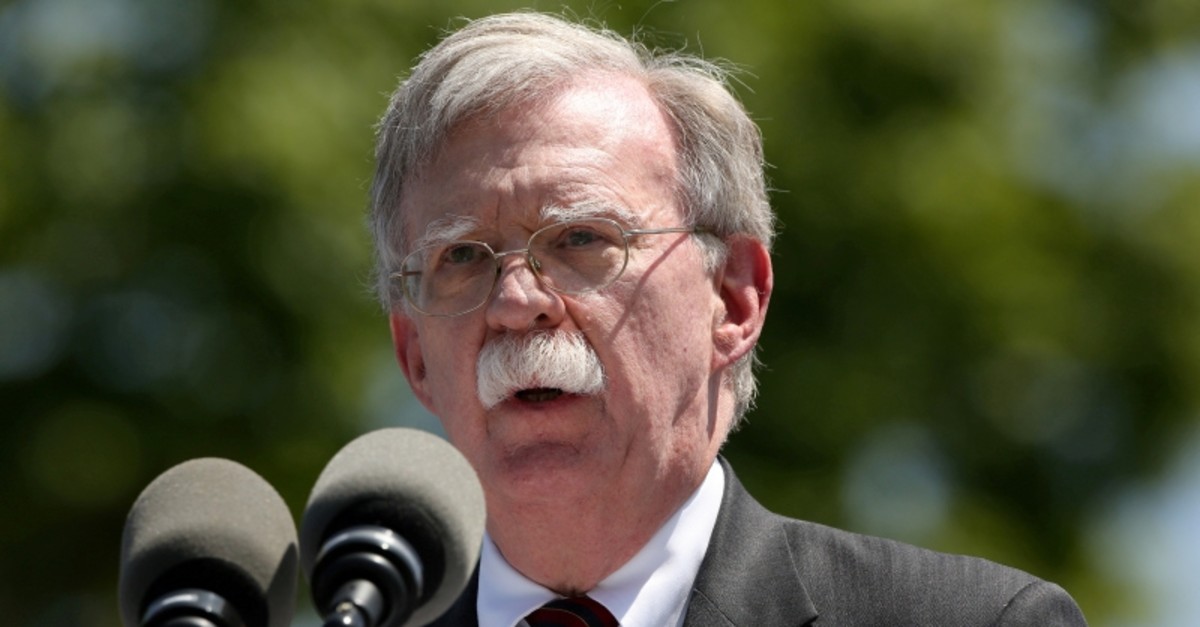 The statement by an unidentified North Korean Foreign Ministry spokesman came as President Donald Trump visited Japan for meetings with Prime Minister Shinzo Abe at which the nuclear standoff with North Korea was expected to be high on the agenda.

Bolton told reporters in Tokyo on Saturday that there was "no doubt" that North Korea's recent missile launches violated U.N. resolutions, and that sanctions against the North must be kept in place. Trump later downplayed the missile tests, tweeting, "North Korea fired off some small weapons, which disturbed some of my people, and others, but not me."

North Korea tested short-range ballistic missiles on May 4 and 9, ending a pause in launches that began in late 2017. The tests were seen as a way for North Korea to pressure Washington to soften its stance on easing sanctions against it without actually causing negotiations to collapse.

In the statement carried by the North's Korean Central News Agency, the North Korean spokesman said his country was exercising its right of self-defense with the launches. North Korea has never recognized the U.N. Security Council resolutions, which it views as denying its "rights to existence and development of a sovereign state," the statement said.

"If any object is launched, it is bound to fly in trajectory," the spokesman said. He said a demand that North Korea ban all launches that use ballistic technology regardless of the range is the same as asking it to relinquish its right to self-defense.

The spokesman said Bolton was an "ignorant" hard-liner who throughout different U.S. administrations pushed provocative policies against North Korea including endorsements of pre-emptive strikes and regime change.

"Bolton, as he confessed himself, played a 'hammer' to 'shatter' the 1994 DPRK-U.S. Agreed Framework, and he is well-known as an anti-DPRK 'war maniac' who fabricated various provocative policies such as designation of our country as "axis of evil", preemptive strike and regime change," the statement read.

"It will be fit to call Bolton not a security adviser striving for security but a security-destroying adviser who is wrecking peace and security," the spokesman said. "It is not at all strange that perverse words always come out from the mouth of a structurally defective guy, and such a human defect deserves an earlier vanishing."

Experts say the weapons North Korea tested this month are new solid-fuel missiles that are potentially nuclear capable and would strengthen the North's ability to strike targets throughout South Korea.

South Korea has expressed concern that the launches may run against the spirit of an inter-Korean military agreement reached last year to reduce tensions, but has been eager to downplay the significance of the tests as it tries to keep a positive atmosphere for dialogue alive. South Korea's presidential office and military have refused to call the launches outright provocations, and have yet to confirm that the missiles were ballistic weapons, although most experts say they clearly were.

"There's no way for us to know why National Security Adviser Bolton made such comments," said a South Korean presidential official, who asked not to be named during a background briefing of reporters on Monday. "There's no change in our official stance that the South Korean and U.S. militaries under coordination are continuing to analyze the missiles."

Negotiations between the U.S. and North Korea have been at a standstill since February, when a summit between Trump and leader Kim Jong Un broke down over what the United States described as excessive North Korean demands for sanctions relief in exchange for only a partial surrender of its nuclear capabilities. Kim since then has said the United States has until the end of the year to come up with mutually acceptable terms for a deal to salvage the negotiations.

Bolton acknowledged that the United States has not been "hearing much from North Korea" since the summit in Hanoi, Vietnam. The U.S. special envoy to North Korea, Stephen Biegun, "can't wait to talk to his North Korean counterpart, but they haven't responded," Bolton said, adding that Biegun was "ready at any point to get on a plane and go anywhere."

The North Korean statement came as South Korea began annual summertime defense drills involving thousands of civilians and troops. The drills have been modified to exclude large-scale military exercises with the United States that were suspended to create space for diplomacy with the North.

The four-day Ulchi Taeguk exercises will include massive civilian evacuation drills and a South Korea-only military drill aimed at preparing for war situations and disasters.