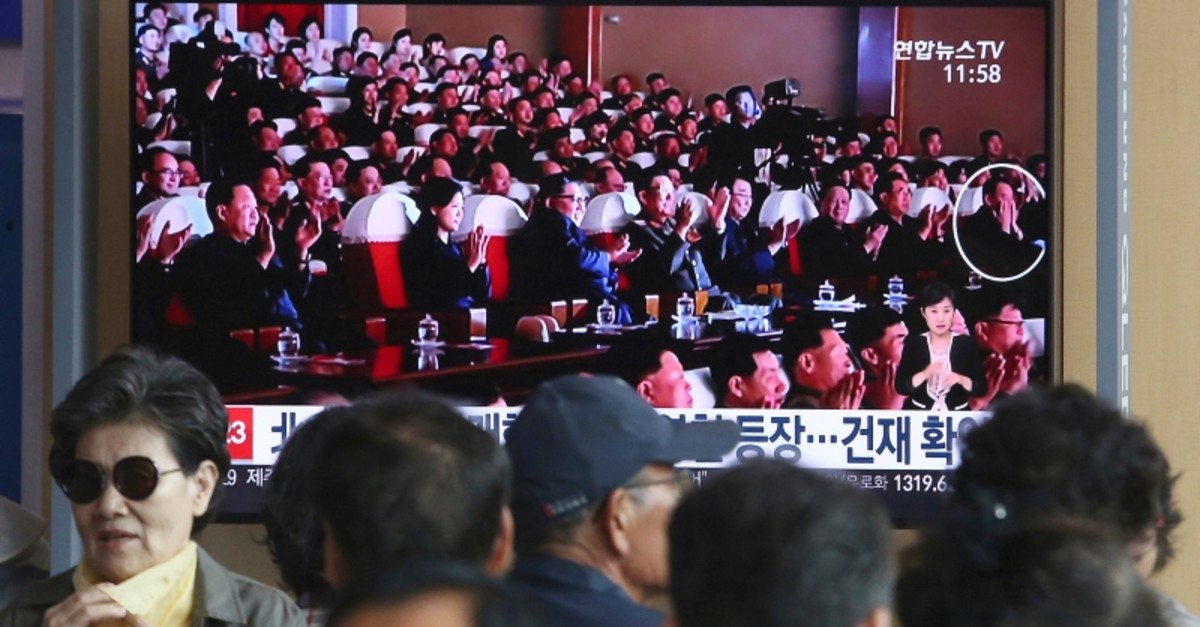 North Korean publications on Monday showed Kim Yong Chol sitting five seats away from a clapping Kim Jong Un in the same row along with other top officials during a musical performance by the wives of Korean People's Army officers. A report by Pyongyang's official Korean Central News Agency named Kim Yong Chol among the attendees of the event, which it said "impressively represented the ideological and mental features of KPA officers' wives, who make every moment of their life honorable with ardent yearning for the leader."

Negotiations between Washington and Pyongyang have been at a standstill since February, when the second summit between Trump and Kim broke down over what the United States described as excessive North Korean demands for sanctions relief in exchange for only a partial surrender of its nuclear capabilities.

Last week, South Korean newspaper Chosun Ilbo cited an unidentified source in reporting that Kim Yong Chol had been sentenced to hard labor and ideological re-education over the failed summit in Hanoi, Vietnam's capital. The newspaper also reported that senior envoy Kim Hyok Chol, who was involved in pre-summit working-level talks with American officials, was executed with four other officials from the North's Foreign Ministry for betraying Kim Jong Un after being won over by the United States.

South Korea's government and media have a mixed record on tracking developments among North Korea's ruling elite, made difficult by Pyongyang's stringent control of information about them.

Lee Sang-min, spokesman for Seoul's Unification Ministry, which deals with inter-Korean affairs, said the ministry would not comment on a "specific internal event in North Korea or its participants" when asked about Kim Yong Chol's reappearance in public. Seoul's spy service has said it could not confirm Friday's report of a possible purge, while the presidential Blue House cautioned against "hasty judgments or comments."

Pompeo said after the report came out that he had seen it and the U.S. was "doing our best to check it out."

The report came at a delicate time for diplomacy as North Korea in past weeks has tested short-range missiles and issued belligerent rhetoric toward American and South Korean officials. Kim Jong Un declared in April that the Trump administration has until the end of the year to come up with mutually acceptable terms for a deal to salvage the nuclear negotiations. Experts say the North is playing measured brinkmanship aimed at increasing pressure on Washington without actually causing the negotiations to collapse.

North Korea has previously executed scapegoats to atone for high-profile political flops. But while many experts believe Kim Yong Chol was pushed to a back seat in negotiations with the United States, there were doubts about the report of a purge.

Cheong Seong-Chang, an analyst at South Korea's Sejong Institute, said Kim Yong Chol, who is also rumored to have health problems, wouldn't have appeared in public this quickly if he was undergoing political re-education. Cheong said it wouldn't make sense for Kim Jong Un to execute Kim Hyok Chol when Kim Yong Chol, the more senior official, would be seen as more responsible for the failure in Hanoi.

"If Kim Jong Un sentences senior officials to hard labor, executes them, or puts them in political prison camps over the collapse of meetings, then no official would be willing to step up in external negotiations," Cheong said. "It's unlikely that Kim would issue extreme punishment unless he's giving up on the talks with the United States."

Kim Yong Chol's rise during the nuclear negotiations had baffled many North Korea watchers because he handled South Korea ties, not international or U.S. relations. Previously, he was a military intelligence chief believed to be behind a slew of provocations, including two deadly attacks in 2010 that killed 50 South Koreans and an alleged 2014 cyberattack on Sony Pictures. Both Seoul and Washington imposed sanctions on him in recent years.

Many experts in South Korea believe experienced foreign ministry hands such as Foreign Minister Ri Yong Ho and First Vice Foreign Minister Choe Son Hui are likely to take the lead in North Korea's nuclear diplomacy as it prepares for the possibility of protracted and highly complicated negotiations with Washington.