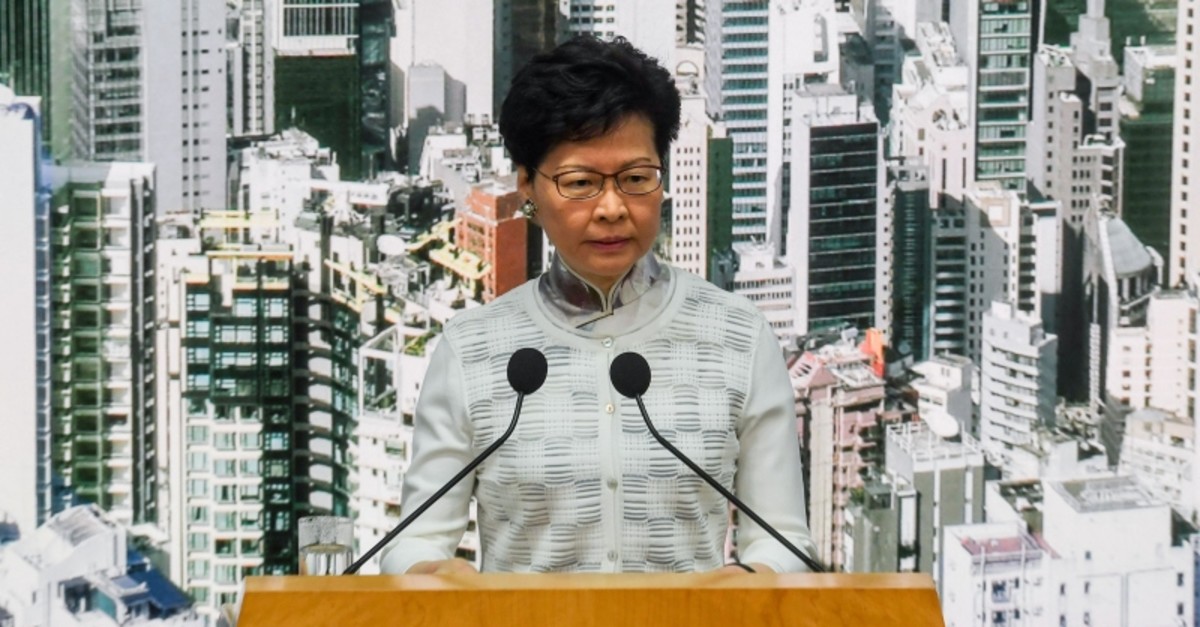 Hong Kong Chief Executive Carrie Lam speaks during a press conference at the government headquarters in Hong Kong on June 15, 2019. (AFP Photo)
by Compiled from Wire Services Jun 15, 2019 10:36 am

Lam told media Saturday she took the move in response to widespread public unhappiness over the measure, which would enable authorities to send some suspects to stand trial in mainland courts.

"The government has decided to suspend the legislative amendment exercise," Lam told reporters.

The international finance hub was rocked by the worst political violence since its 1997 handover to China on Wednesday as tens of thousands of protesters were dispersed by riot police firing tear gas and rubber bullets.

Three days earlier record crowds held a record breaking rally in which organizers said more than a million people hit the streets calling for the law to be scrapped.

Many in the former British colony worry it will further erode cherished legal protections and freedoms promised by Beijing when it took control in 1997.

As criticism mounted, Lam found herself under pressure to backtrack, even from within her own political camp and advisors.

At a press conference on Saturday she announced work on the extradition bill would be paused, adding that no date would be set for its reintroduction.

"The council will halt its work in relation to the bill until our working communication explanation and listening to opinions is completed," she said. "We have no intention to set a deadline for this work."

She said the extradition law was needed to plug loopholes and stop the international finance hub being a haven for criminals but admitted her administration had underestimated the public backlash.

"I feel deep sorrow and regret that the deficiencies in our work and various other factors have stirred up substantial controversies and disputes in society following the relatively calm periods of the past two years," she said.

Hong Kong activists responded to the announcement by saying they're not satisfied with a decision to shelve unpopular extradition legislation and still plan a mass protest on Sunday.

A leader of the Civil Human Rights Front, Jimmy Sham, called on Chief Executive Carrie Lam to withdraw the bill entirely and to apologize for the use of potentially deadly force by police in clashes earlier this week.