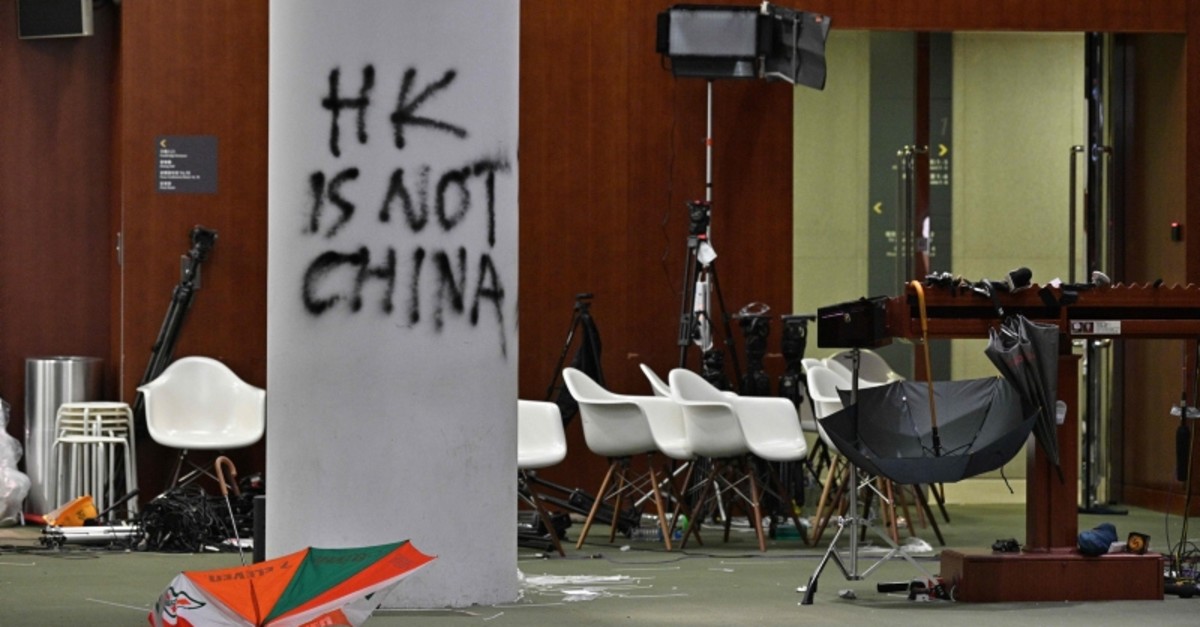 Graffiti and umbrellas are seen outside the main chamber of the Legislative Council during a media tour in Hong Kong on July 3, 2019, two days after protesters broke into the complex. (AFP Photo)
by Compiled from Wire Services Jul 03, 2019 8:02 pm
Hong Kong police said on Wednesday they had arrested 12 people in connection with incidents on July 1, although it was unclear if they were among protesters who smashed their way into the city's legislature and ransacked the building.

The police said they had also arrested six people linked to incidents the day before, and eight others suspected of being involved in the illegal disclosure online of police officers' private information.

In recent weeks, Hong Kong has been beset by public protests against the government's handling of an extradition bill that would allow people in the city, with its cherished tradition of judicial independence, to be sent to stand trial in China, where courts are controlled by the ruling Communist Party.

The unprecedented siege and brief occupation of the Legislative Council, or Legco, took the demonstrations to a new and dangerous level on a symbolic day - the July 1 anniversary of Hong Kong's return to China from Britain.

Hong Kong's Beijing-backed leader Carrie Lam had strongly promoted the bill, but suspended it on June 15 in the face of public protests against it. Critics have called on her to officially kill the bill, but she has resisted.

The issue has galvanized a wide swath of Hong Kong society and drawn hundreds of thousands of people to the streets to protest in recent weeks.

In a brief statement, police said the 12 people arrested in connection with violence on July 1 had been linked to episodes that took place in the morning.

The attack on the legislature did not begin to unfold until the afternoon.

On July 1, police published a statement condemning the pre-dawn blocking of roads near the legislature, saying "some protesters stole iron poles and bricks from nearby construction site and guard rails from nearby roads."

Many protesters have tried to hide their identities during the demonstrations by wearing face masks, helmets and in some case carrying umbrellas and avoiding cameras, but more arrests are widely expected.

Five men and one woman were arrested "for offenses including possession of offensive weapons, assault occasioning actual bodily harm, common assault and fighting in a public place" for various incidents on June 30, police said.

Earlier, police said eight people suspected of disclosing officers' private information online and making threats against them had been arrested.

It was not immediately made clear if those eight were related to the anti-extradition protests, but police have been a target of criticism after using rubber bullets, beanbag rounds and tear gas last month to try to disperse crowds.

Police Superintendent Swalikh Mohammed of the technology crime division told a news conference the six men and two women arrested were suspected of disclosing names, ID card numbers and birth dates of family members. Investigators also detected an attempt to hack the police website but he said it failed.

The online crimes "affected a large number of officers, resulting not only to nuisance but threats," he said.

"The operation is ongoing and we may actually arrest more people in the near future."

On June 26, police announced they found a website "disclosing the personal data of police officers suspectedly obtained by unlawful means."

Hong Kong returned to Chinese rule in 1997 under a "one country, two systems" formula that allows it freedoms not enjoyed in mainland China, including freedom to protest and an independent judiciary.

Meanwhile, the U.K. government summoned China's ambassador for a dressing-down on Wednesday after Beijing officials accused Britain of meddling in Hong Kong's affairs.

At a news conference in London, he said that "the fundamental principle guiding our two countries is mutual respect, non-interference into internal affairs."

In Beijing, Chinese Foreign Ministry spokesman Geng Shuang said earlier that Hunt was "basking in the faded glory of British colonialism and obsessed with lecturing others."

Hunt has condemned violence but said people in Hong Kong fear "their basic freedoms are under attack." He has urged China to respect the 1984 U.K.-Chinese declaration enshrining the "one country, two systems" principle of Hong Kong autonomy.

After the ambassador's comments, Hunt tweeted: "Message to Chinese govt: good relations between countries are based on mutual respect and honoring the legally binding agreements between them.

"That is the best way to preserve the great relationship between the UK and China."