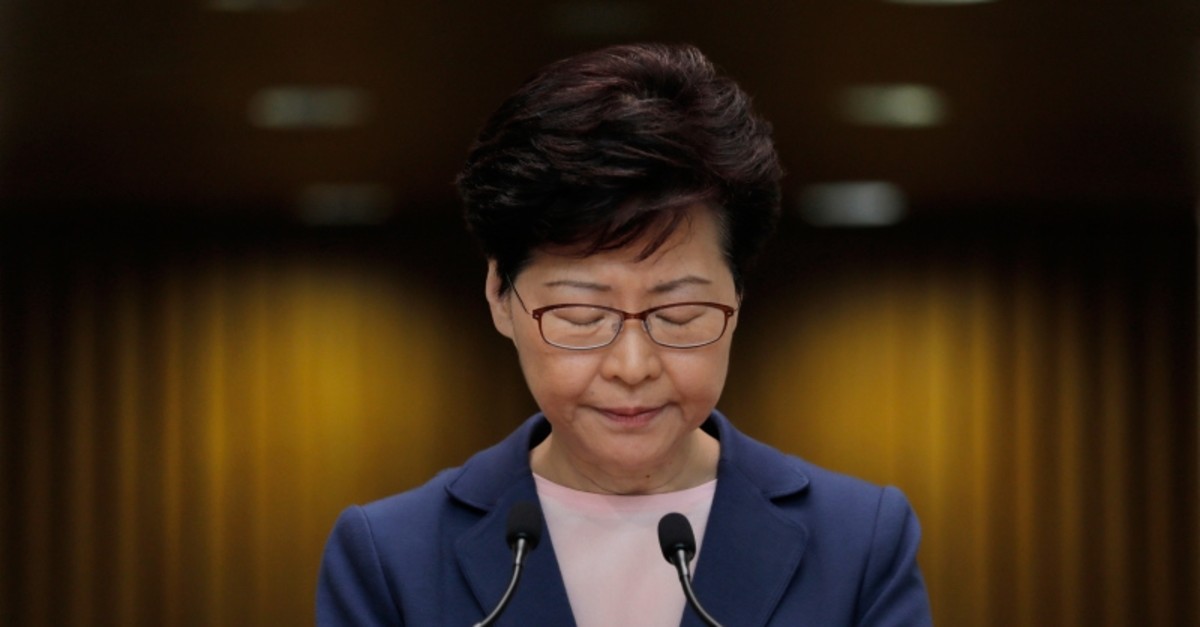 The international finance hub has been plunged into its worst crisis in recent history by a month of marches and sporadic violent confrontations between police and pockets of hardcore protesters.

The rallies were sparked by a draft law that would have allowed extraditions to mainland China. But they have morphed into a wider movement calling for democratic reforms and a halt to sliding freedoms in the semi-autonomous territory.

In a city unaccustomed to such upheaval, police have fired tear gas and rubber bullets while the parliament has been trashed by protesters -- as Beijing's authority faces its most serious challenge since Hong Kong was handed back to China in 1997.

On Tuesday the city's chief executive Carrie Lam admitted her administration's attempt to introduce the bill was a "complete failure", saying that her government would not seek to reactivate it in parliament.

"There is no such plan. The bill is dead," Lam said.

But she once against refused to buckle to demands to completely withdraw the bill from the legislative agenda, provoking outcry from the anti-government camp.

Lam's words about the bill are "another ridiculous lie" tweeted leading democracy activist Joshua Wong, who was recently released from jail for his role in protests in 2014.

"The bill still exists in the 'legislative programme' until July next year."

The Civil Human Rights Front -- which has organised some of the mass rallies -- said it would announce fresh protests over the coming days.

With calls mounting for her resignation, Lam has made few public appearances in recent weeks.

But on Tuesday she resurfaced, agreeing to meet student protesters and adding that she recognised the swirling economic, political and social challenges facing the city.

"I come to the conclusion that there are some fundamental and deep-seated problems in Hong Kong society," she said.

Analyst Dixon Sing said her words would do little to defang the protest movement.

"Trust in the government has sunk to such a record level that if there's not a clear fulfillment of the (key) demands, the majority of the Hong Kong public will still be very sceptical of the government's sincerity," he told AFP.

Lam has been under pressure to appoint an independent judge as head of a public commission of inquiry into the police response to the protests.

But she rejected those calls again on Tuesday, backing an existing police complaints body to investigate claims of excessive force.

The anti-extradition movement has united an unlikely cross-section of Hong Kong society, including major business, legal bodies as well as religious leaders, activists and journalists.

Protesters are becoming increasingly creative -- chat forums and encrypted messenger apps are buzzing with calls for the mass withdrawal of funds from the Bank of China this Saturday to "stress test" the organisation's liquidity.

Beijing has thrown its full support behind Lam, calling on police to pursue anyone involved in the parliament storming and other clashes.

Over the weekend its ambassador to London said the extradition bill was needed to "plug loopholes", fuelling fears Beijing still wants the legislation to pass.

The protests are also part of a longer battle for the soul of Hong Kong between those who see full integration with the autocratic mainland as an inevitability and others wishing to preserve the city's unique freedoms and culture.

Under the 1997 handover deal with the British, China promised to allow Hong Kong to keep key liberties such as its independent judiciary and rights like freedom of speech.

But many say that 50-year deal is already being reneged on, citing the disappearance into mainland custody of dissident booksellers, the disqualification of prominent politicians and the jailing of democracy protest leaders.

Authorities have also resisted calls for the city's leader to be directly elected by the people.