Meth trade in Asia worth up to $61B as gangs outpace authorities, UN says 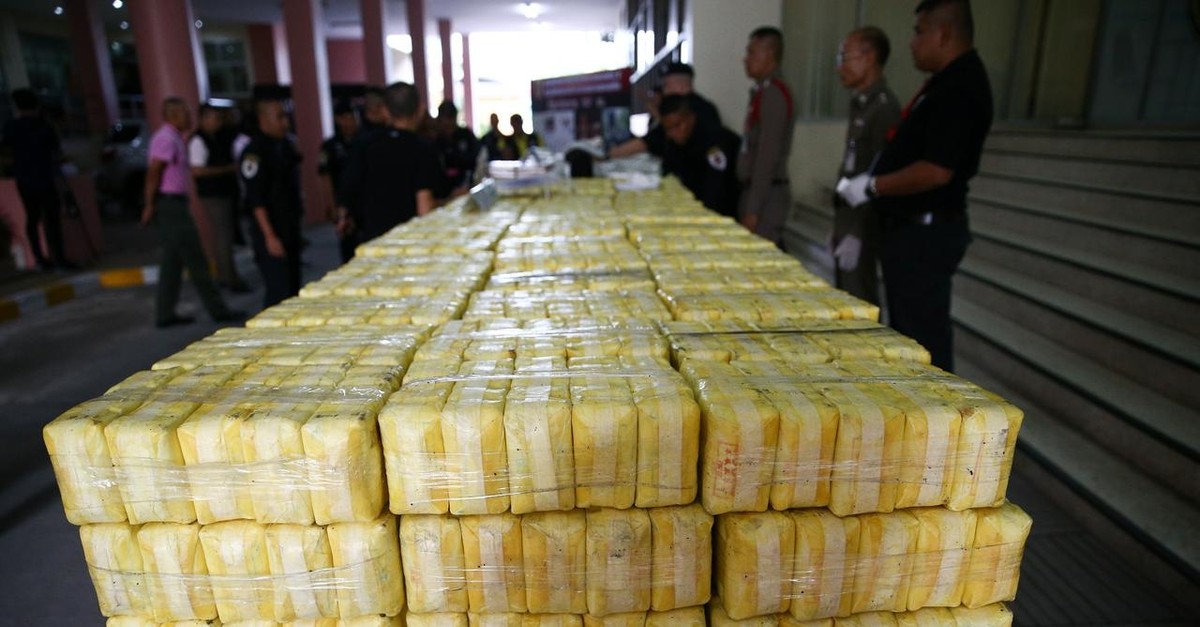 Police officers arrange seized drugs before a news conference at Office of the Narcotics Control Board in Bangkok, Thailand September 18, 2018. (Reuters Photo)
by Jul 18, 2019 10:57 am

Transnational crime groups are trafficking vast quantities of methamphetamine made in Southeast Asia, the United Nations said on Thursday, putting the value of the Asia-Pacific market for the drug between $30.3 billion and $61.4 billion.

The explosion in the meth trade, from an estimated $15 billion in 2013, comes as powerful syndicates exploit endemic graft, weak law enforcement and lax border controls, the United Nations added.

"In many parts of Southeast Asia, the systematic payment of bribes at borders is as regulated as the payment of fees in official bureaucratic systems," the United Nations Office of Drugs and Crime (UNODC) said in a report.

The cartels, based in Hong Kong, Macau, Taiwan and Thailand, produce most of the meth in northern Myanmar in industrial-scale labs and distribute it as far away as Japan and New Zealand.

"The Asia-Pacific meth market is now the biggest in the world," Jeremy Douglas, the agency's representative for Southeast Asia and the Pacific, told Reuters.

"Of all the organised crime types, meth trafficking is the most dangerous and the most profitable. It underpins the growing power of these transnational crime groups."

The most valuable markets in Australia, Japan, New Zealand and South Korea account for $20 billion, or a third of the high-end estimate of the trade, the agency added.

More than 12 million users in East Asia, Southeast Asia, Australia and New Zealand consumed about 320 tonnes of pure methamphetamine last year and a record 120 tonnes was seized by law enforcement.

Crystal meth is mostly consumed by middle-class party-goers in developed countries. In poorer nations, users take it as tablets mixed with caffeine, often to help cope with gruelling work in factories and at construction sites.

Mushrooming poorly regulated casinos in Southeast Asia offer criminals an easy way to launder illicit earnings, the agency said, and such funds can go through the formal banking system in wealthy Singapore and the financial hub of Hong Kong.

"There has been a proliferation of casinos, something that is rarely talked about and deserves attention," said Douglas, adding that Southeast Asian casino numbers have swelled to 230 after a money-laundering crackdown in the gambling hub of Macau.

Responding to Thursday's report, a Thai senator offered to join hands with the agency and other nations to fight the menace.

"We are ready to take a leadership role and work with UNODC and international partners to build resilience and address cross-border trafficking," said Prajin Juntong, who is also a former deputy prime minister.

Organised crime groups also fuel a rising trade in counterfeit goods and medicines, people-smuggling and trafficking of wildlife and timber, the report added.

"Wildlife and timber trafficking is also an emergency," said Douglas, calling for a joint combat effort. "Extinction is on the horizon."