At least 18 killed as Pakistani military plane crashes into homes 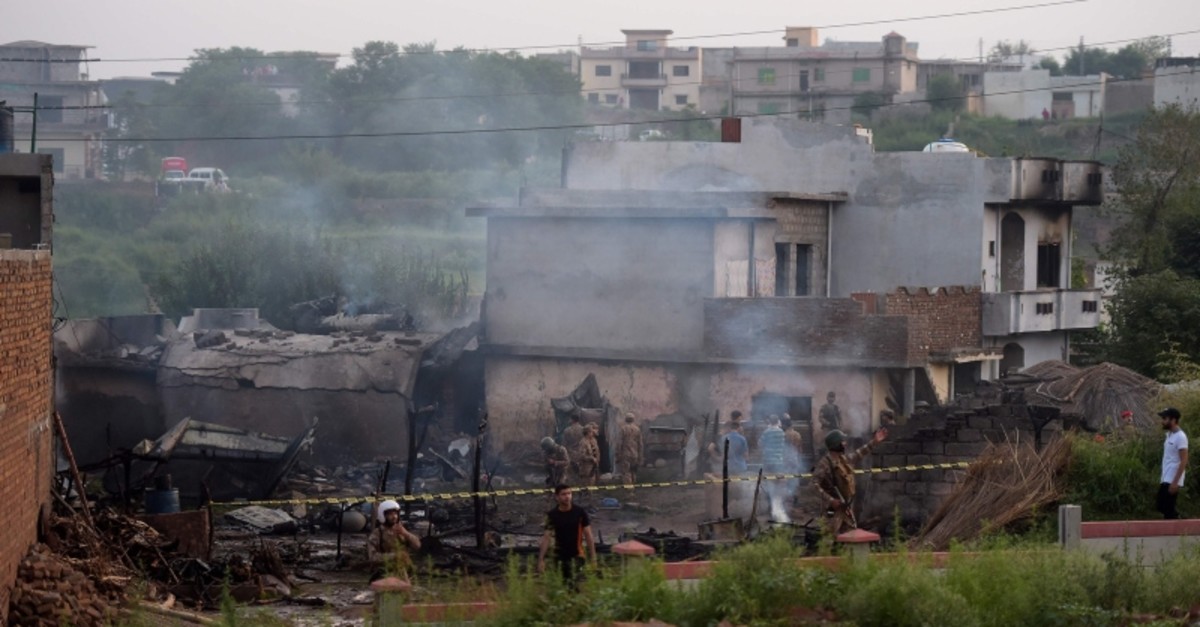 Soldiers cordon off the site where a Pakistani Army Aviation Corps aircraft crashed in Rawalpindi on July 30, 2019. (AFP Photo)
by Associated Press Jul 30, 2019 9:06 am

A Pakistani military plane on a training flight crashed into homes near the garrison city of Rawalpindi before dawn Tuesday, killing at least 18 people, most of them on the ground, officials told AFP.

Fires, damaged homes and debris were visible in Mora Kalu village on the outskirts of Rawalpindi after daybreak. Troops and police cordoned off the residential area to search for plane debris and investigative evidence after the rescue efforts had ended.

"We have taken 18 dead bodies to hospital... that included 13 civilians and five crew members," said local rescue spokesman Farooq Butt, adding that a further 12 people had been injured in the accident near the capital Islamabad.

"All the bodies are badly burned, so DNA tests are required for identification," he added.

"We have shifted all the bodies and injured persons to hospitals," he told The Associated Press. "Children are among the dead."

Five soldiers, including two army pilots, and at least 12 civilians were killed, the military said in a statement.

Residents say they woke up when they heard an explosion and saw debris of a burning plane near their homes. Army helicopters were seen hovering over the crash site later.

"My sister, her husband and their three children were killed when the plane crashed into their home," said Mohammad Mustafa, as he sobbed near his sister's badly damaged home. He said rescuers and troops quickly reached the area after the crash.

Several men and women who lost their relatives in the crash were seen wailing and crying as rescuers put charred bodies of the victims into ambulances. Footage on social media showed the plane was flying very low before it quickly went down.

Abdul Rehman, a medical doctor, said at least three homes were badly damaged and the pilots' bodies had been retrieved.

Prime Minister Imran Khan expressed his grief and sorrow for those killed or injured in the incident.

The military said the army aircraft was on a routine training flight when it crashed, but had no information on the possible cause.

Pakistan's military has been on maximum alert since February when India launched an airstrike inside Pakistan, saying it was targeting militants who were responsible for the suicide bombing that killed 40 Indian troops in Indian-administered Kashmir.

Pakistan at the time retaliated and shot down two Indian air force planes. One Indian pilot was captured and later released amid signs of easing tensions.

In 2010, a Pakistani passenger jet crashed into the hills surrounding Pakistan's capital Islamabad amid poor weather, killing all 152 people on board.