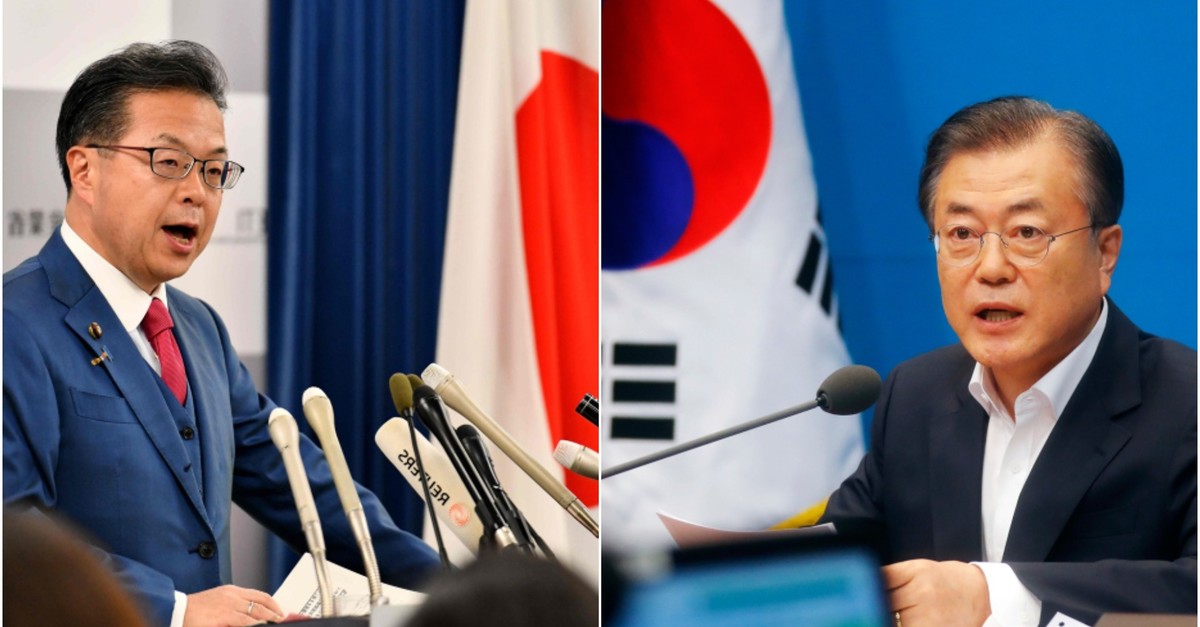 Japan's Economy, Trade and Industry Minister Hiroshige Seko speaks during a press conference in Tokyo; President Moon Jae-in speaks during an emergency cabinet meeting at the presidential Blue House in Seoul on Aug 2, 2019. (AFP/AP Photos)
by Aug 02, 2019 10:03 am

Japan's government on Friday decided to rescind South Korea's favored export partner status, prompting fury from Seoul over the "reckless" act and concern about security ties between the allies.

The move comes with the countries mired in a long-running dispute over the use of forced labor during World War II, but Japan insists the move is related to national security and is not retaliatory.

Tokyo moved ahead with the decision despite U.S. calls for its allies to calm tensions, and a warning from South Korea of "grave consequences" including a review of bilateral security ties.

"The government at a cabinet meeting today approved a revision to the export control law... South Korea, the only Asian nation on the list, will be removed," Japan's Trade Minister Hiroshige Seko told reporters.

South Korean President Moon Jae-in called the move "reckless", warning without elaborating that "responsibility for what is going to happen next also lies squarely with the Japanese government."

The decision makes South Korea the first country ever to be dropped from Tokyo's list of nations granted minimal constraints on exports of products that could be diverted to military use.

The move, expected to take effect on August 28, means hundreds of products listed as sensitive will be subject to tighter export controls, though experts said the effect would be more symbolic than economic.

It "will only have a limited impact on the South Korean economy," said Hajime Yoshimoto, senior economist at Nomura Securities, in part because Japanese exporters can obtain special permission to ship to non-white-list countries with simplified procedures.

Many major Japanese exporters already have that special permission, according to the trade ministry.

'Not an export embargo'

"I'd like to make it clear that this is not an export embargo," Seko said Friday.

"We believe stripping South Korea of preferential treatment does not affect the global supply chain or have a negative impact on Japanese companies."

The measure is the latest blow to ties between South Korea and Japan, which have plunged to new lows over a long-running dispute on forced labour during World War II.

A string of South Korean court rulings ordering Japanese companies to compensate forced labor victims has infuriated Japan, which argues the issue was resolved when the two countries normalized ties.

Japanese officials say both the specific export restrictions imposed last month and the white list removal are not a "retaliation" though they have cited a "loss of trust" in ties with Seoul.

They say South Korea has repeatedly violated the rules governing sensitive exports and the moves are necessary for "national security."

The row has alarmed Washington and U.S. Secretary of State Mike Pompeo is expected to hold trilateral talks with his Japanese and South Korean counterparts, Taro Kono and Kang Kyung-wha, later Friday on the sidelines of the ASEAN summit in Bangkok.

Kono and Kang talked Thursday, but the meeting appeared frosty, with little sign either side was moving towards a compromise.

And on Friday Kang slammed Japan's "unilateral and arbitrary decision" in remarks quickly rebutted by Kono, who said the measure put South Korea on the same footing as many other ASEAN nations.

"I have not heard any complaints from our ASEAN friends," he said.

"Japan's necessary and legitimate review of its exports control is fully compatible with the free trade regime, including the WTO agreement."

"This is in effect a de facto sanction against South Korea," he told AFP, predicting retaliatory measures from South Korea, where public boycotts of Japanese goods and cancellations of exchanges with Japan have already taken hold.

"For South Korea, it must feel like a pinpoint assault to the heart," he said.

"The bilateral relation is at rock-bottom."