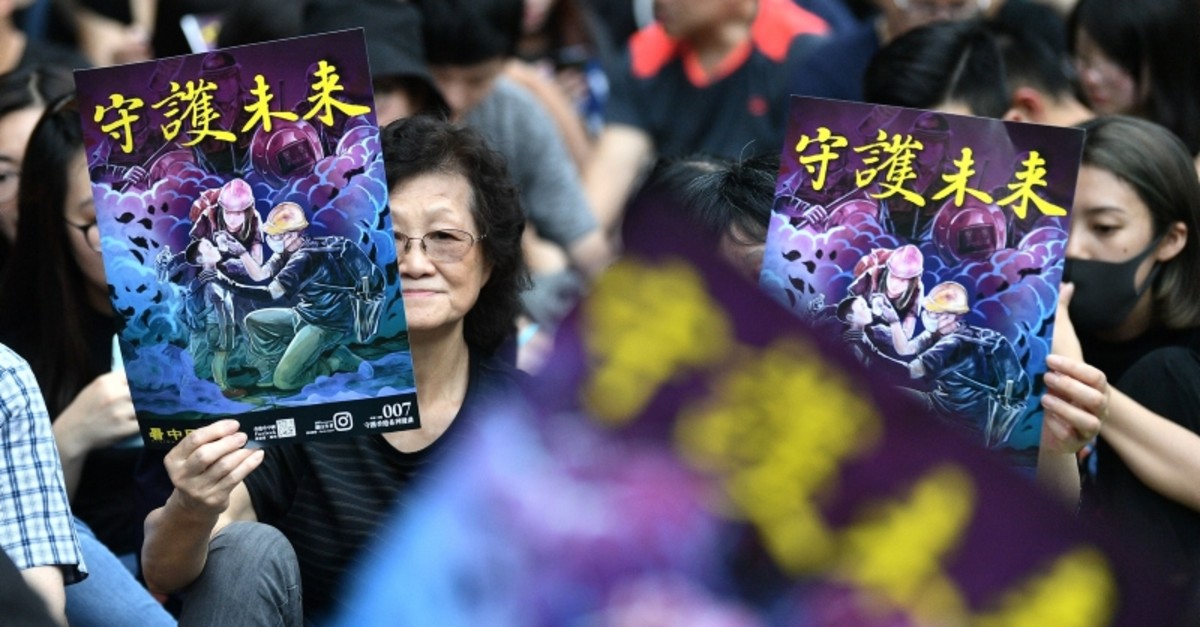 People attend a protest in the Western district of Hong Kong on August 4, 2019, in the latest opposition to a planned extradition law that has quickly evolved into a wider movement for democratic reforms. (AFP Photo)
by French Press Agency - AFP
Aug 04, 2019 1:42 pm

Pro-democracy protesters held twin rallies in Hong Kong on Sunday as China delivered fresh warnings over the unrest battering the city, a day after police fired tear gas at demonstrators in a popular tourist hub.

Thousands marched through two separate districts on Sunday afternoon, the latest protests in another weekend of explosive unrest.

On Saturday, Tsim Sha Tsui — a harbor-side district known for its luxury malls and hotels — was filled with acrid plumes of tear gas as small groups of hardcore protesters battled police in streets usually brimming with tourists and shoppers.

"The central government will not sit idly by and let this situation continue," the agency wrote.

Semi-autonomous Hong Kong has seen two months of protests and clashes triggered by opposition to a planned extradition law that quickly evolved into a wider movement for democratic reforms.

But authorities in Hong Kong and Beijing have only hardened their stance. Dozens of protesters were charged with rioting last week while the Chinese military said it was ready to quell the "intolerable" unrest if requested.

Two gatherings were held on Sunday, one in Tseung Kwan O district and the other in Kennedy Town, while the city is also gearing up for a strike on Monday.

The latter rally was not far from the Liaison Office, the department that represents China's central government in Hong Kong.

Two weeks ago, the office was pelted with eggs and paint in a move that infuriated Beijing and sparked the rapidly escalating warnings from the mainland.

Protesters vowed to keep hitting the streets, even though their movement has had little success.

"I'm more worried than hopeful," Florence Tung, a 22-year-old trainee lawyer who was among the thousands marching through Tseung Kwan O, told AFP.

"It's like no matter how much us citizens do, we cannot change the government," she added, referring to the city's unelected pro-Beijing leaders.

Kai Hou, a 41-year-old education worker, said he disagreed with the tactics of more hardcore violent protesters but supported their overall goals.

"Not everyone may approve of their radical acts, but their goal is simple, they want to build a better Hong Kong," he told AFP.

The last fortnight has seen a surge in violence on both sides with police repeatedly firing rubber bullets and tear gas to disperse increasingly hostile projectile-throwing crowds.

A group of government supporters also attacked demonstrators, putting 45 people in hospital, with many accusing the police of being too slow to respond.

In Tsim Sha Tsui, masked demonstrators smashed the windows of cars in a police parking lot and used a large slingshot to launch bricks at the building.

Others put up barricades on busy shopping thoroughfares and temporarily blockaded a cross-harbor tunnel.

Police fired tear gas there and in Wong Tai Sin, a nearby working-class district where large crowds of angry residents joined protesters.

Police said they detained "over 20 people" throughout the evening, bringing the total number of arrests to more than 200 since the protest movement exploded on 9 June.

Anger towards the police is at record levels with officers increasingly derided in chants as Beijing's enforcers — although police deny using excessive force and say they are facing increasingly hardcore protesters.

Under the terms of the 1997 handover deal with Britain, Hong Kong has rights and liberties unseen on the Chinese mainland, including an independent judiciary and freedom of speech.

But many say those rights are being curtailed, citing the disappearance into mainland custody of dissident booksellers, the disqualification of prominent politicians and the jailing of pro-democracy protest leaders.

Public anger has been compounded by rising inequality and the perception that the city's distinct language and culture are being threatened by ever-closer integration with the Chinese mainland.

Hong Kong chief executive Carrie Lam has made few concessions beyond agreeing to suspend the extradition bill, and has shied away from public appearances.

Protesters are demanding her resignation, an independent inquiry into police tactics, an amnesty for those arrested, a permanent withdrawal of the bill, and the right to elect their leaders.