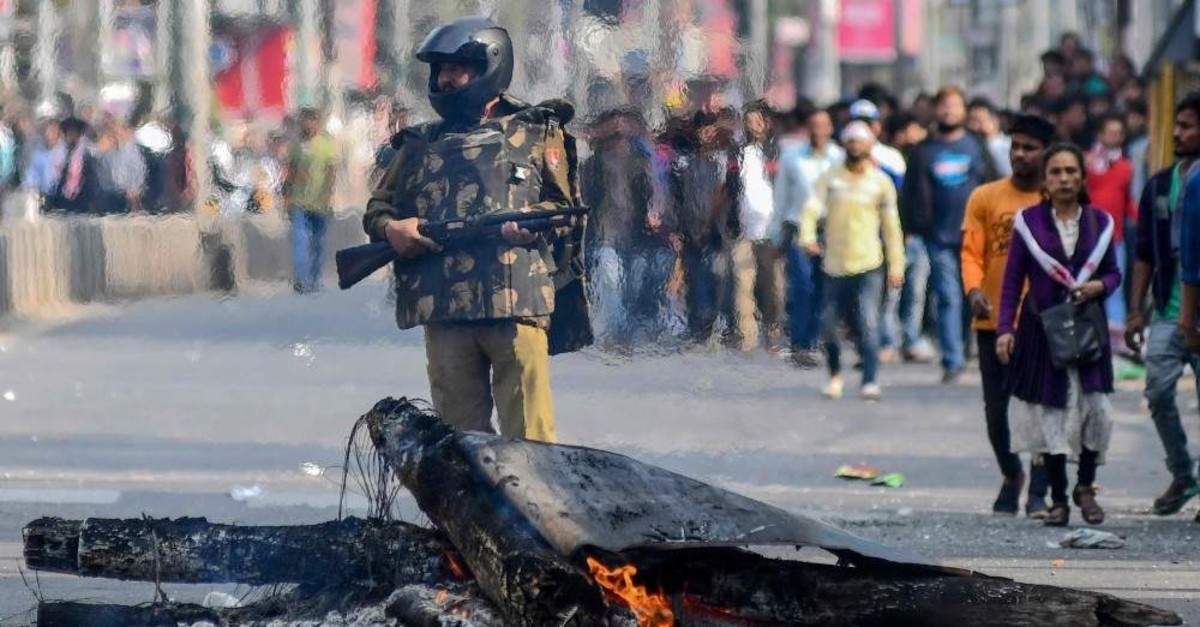 A security personnel stands guard near a fire on a road during a curfew, Guwahati, Dec. 12, 2019. (AFP Photo)
by Daily Sabah with Agencies Dec 12, 2019 5:39 pm
Condemnations has grown over the Indian government’s contentious citizenship bill which discriminates against the country’s 200 million Muslims as part of the Hindu-nationalist government’s agenda.
The Citizenship Amendment Bill (CAB) allows New Delhi to grant citizenship to illegal immigrants who entered India from three neighboring countries before 2015, but not if they are Muslim.
Human rights watchdog Amnesty India said it legitimized discrimination on the basis of religion and stood in clear violation of India's Constitution and international human rights law. “Welcoming asylum seekers is a positive step, but in a secular country like India, slamming the door on persecuted Muslims and other communities merely for their faith reeks of fear-mongering and bigotry," the group said in a statement. Several opposition lawmakers who debated the bill in Parliament said it would be challenged in court.
As thousands of people protested the legislation in northeastern Assam state, police arrested dozens of people and enforced a curfew on Thursday in several districts. Authorities deployed thousands of paramilitaries and blocked mobile internet in the northeast state.
The bill's passage follows a contentious citizenship registry exercise in Assam intended to identify legal residents and weed out those in the country illegally. In 2018, the Indian government excluded more than 4 million people from a draft list of citizens in the border state of Assam, mostly Bengali-speaking Muslims who could not produce valid documents. The move created fear among Muslims whose fundamental rights as Indian citizens are under risk they believe.
Work on the citizens' register has accelerated under the government of Prime Minister Narendra Modi's Hindu nationalist Bharatiya Janata Party (BJP). The BJP's Hindu-first campaign has become more strident, critics say, playing to its core base with divisive programs such as the citizenship test in Assam, already a tinderbox of ethnic and religious tensions. Elsewhere in the country's northern heartland, the lynching of Muslim cattle traders has risen under Modi, in a country where many Hindus consider cows to be sacred, further deepening social divides. The BJP has denied the lynching having any connection with it being in power.
Last Update: Dec 20, 2019 2:21 am
RELATED TOPICS