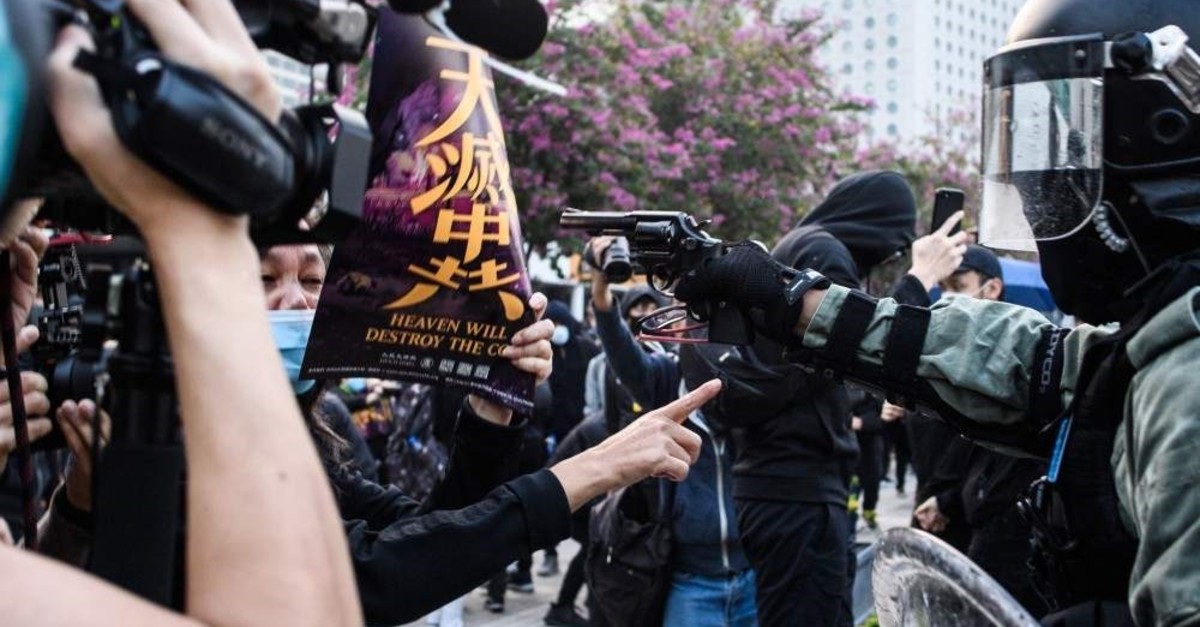 Hong Kong riot police broke up a solidarity rally for China's Uighurs on Sunday – with one officer drawing a pistol – as the city's pro-democracy movement likened their plight to that of the oppressed Muslim minority. More than 1,000 people rallied peacefully in support of China's ethnic Uighurs, waving Uighur flags and posters in the city's financial district, marking the latest demonstration in over six months of anti-government unrest.

A small group of protesters removed a Chinese flag from a nearby government building and tried to burn it, an AFP reporter on the scene said. Organizers stopped the flag being burned but riot police then swooped in with pepper spray, sparking anger from the crowd who threw water bottles.

One officer drew his side-arm and pointed it at the crowd but did not fire. Multiple protesters were seen being detained. The rally in support of Uighurs is likely to anger Beijing.

China has faced international condemnation for rounding up an estimated 1 million Uighurs and other mostly Muslim ethnic minorities in internment camps in the northwestern region of Xinjiang. The emergence of a huge surveillance and prison system that now blankets much of Xinjiang has been watched closely in Hong Kong which has been convulsed by six months of huge and sometimes violent protests against Beijing's rule.

Pro-Uighur chants and flags have become commonplace in Hong Kong's marches but Sunday's rally was the first to be specifically dedicated to Uighurs. The group on Sunday listened to speeches warning that the Chinese Communist Party's crackdown in Xinjiang could one day be replicated in Hong Kong.

"We shall not forget those who share a common goal with us, our struggle for freedom and democracy and the rage against the Chinese Communist Party," one speaker shouted through a loudspeaker to cheers from the crowd. A mixed crowd of young and elderly people, dressed in black and wearing masks to shield their identities, held up signs reading "Free Uyghur, Free Hong Kong" and "Fake 'autonomy' in China results in genocide."

Many of those attending were waving the flag of "East Turkestan," the term many Uighur separatists use for Xinjiang, which has a white crescent moon on a blue background. Others wore blue face masks displaying the East Turkestan flag. Flags for Tibet – another restless region of China that has long been under a security lockdown – were also flown as well as Taiwan flags.

The protest comes after midfielder Mesut Özil of English soccer club Arsenal caused a furor in China after he criticized the country's policies toward the Muslim ethnic minority in the restive northwestern region of Xinjiang.

Özil, a German Muslim of Turkish origin, tweeted that Uighurs were "warriors who resist persecution" and criticized both China's strong hand in Xinjiang and the relative silence of Muslims in response.

"I think basic freedom and independence should exist for all people, not just for Hong Kong," said a 41-year-old woman surnamed Wong who attended the protest with her husband.

United Nations experts and activists say at least 1 million Uighurs and members of other largely Muslim minority groups have been detained in camps in Xinjiang since 2017 under a campaign that has been condemned by the United States and other countries.

Beijing initially denied the existence of the Xinjiang camps, but now says they are "vocational training centers" necessary to combat terrorism. Few Muslim countries have openly criticized China given its huge economic clout. But increasingly high profile figures are speaking out.