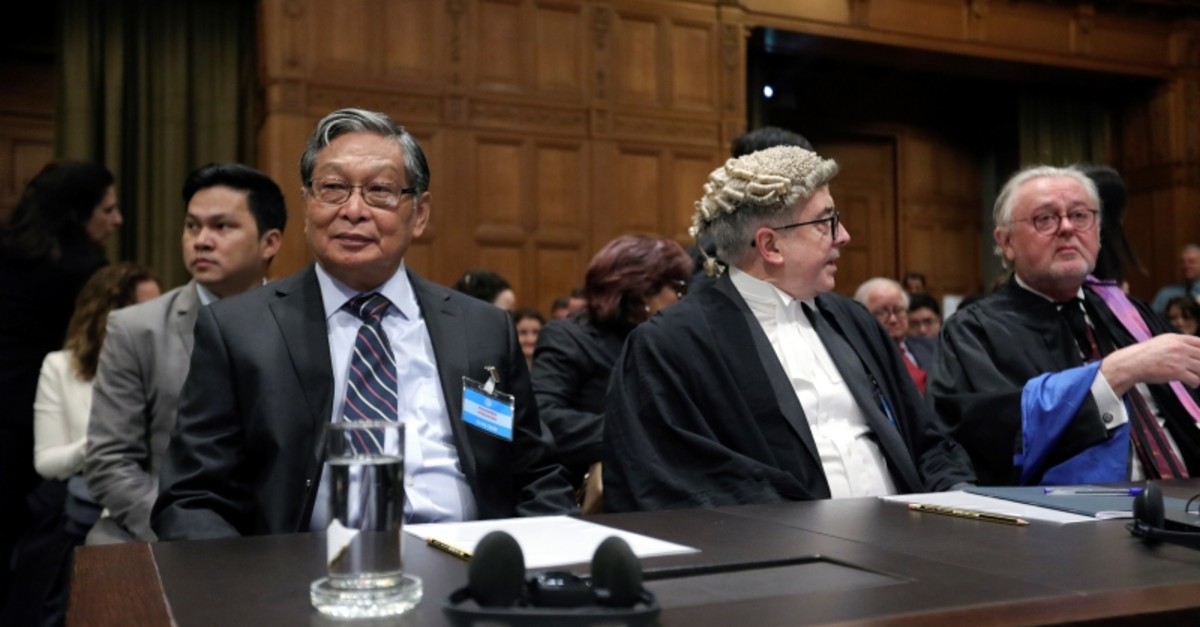 Minister for the Office of the State Counsellor of Myanmar, Kyaw Tint Swe, attends the ruling in a case against Myanmar at the International Court of Justice (ICJ) in The Hague, Netherlands, Jan. 23, 2020. (Reuters Photo)
by Daily Sabah with Agencies Jan 23, 2020 1:06 pm

The World Court ordered Myanmar to protect its Muslim Rohingya and avoid acts of genocide in a ruling that could hurt its leader, Aung San Suu Kyi's international reputation

The highest court of the United Nations, the International Court of Justice (ICJ), on Thursday ordered Myanmar to protect Rohingya Muslims from acts of genocide, in an embarrassing blow to the country’s top leader, Aung San Suu Kyi. The Rohingya remain "at serious risk of genocide," the court found, ordering Myanmar to report back within four months on the steps it has taken to comply with the decision. However, there has been some doubts about whether Myanmar will comply with the verdict. The ICJ's rulings are final and without appeal, but it has no way of enforcing them. Still, a ruling against Myanmar could hurt its international reputation and set a legal precedent.

The Myanmar government has long been blamed for genocide against the minority Muslim community. The exodus of Rohingya began in August 2017 after Myanmar security forces launched a brutal crackdown following attacks by an insurgent group on guard posts. The report, wrapping up two years of documentation of human rights violations by security forces, revealed that counterinsurgency operations in 2017 included "genocidal acts."

However, Suu Kyi strongly denied wrongdoing by government forces. Suu Kyi has made it clear that she supports Myanmar's military, which was founded by her father, and her government's rhetoric has left little doubt as to how she regards the Rohingya as her office dismissed accounts of mass sexual violence by soldiers against Rohingya women in 2016 as "fake rape."

The Rohingya Youth Association, a group based in refugee camps in Bangladesh, welcomed the ICJ ruling. "This is really helpful for Rohingya living inside Rakhine state," association founder Khin Maung said. Rohingya who remained in Rakhine state watched the ICJ ruling on their phones but were careful to do so indoors for fear of being caught and punished by security forces, as reported by German news agency, DPA.

The U.N. Security Council can be called upon to apply political pressure to Myanmar if it doesn't comply. "The chances of Aung San Suu Kyi implementing this ruling will be zero unless significant international pressure is applied," said Anna Roberts, executive director of the Burma Campaign U.K. group. "So far, the international community has not been willing to apply pressure on Aung San Suu Kyi over her own appalling record on human rights," Roberts said.

The ruling came two days after a Myanmar government-backed commission report denied there was any genocide of the persecuted community. The report drew criticism from rights activists. In a statement, Europe-based Free Rohingya Coalition (FRC) slammed the findings of Myanmar's Independent Commission of Enquiry which concluded that there is "no" or "insufficient" evidence to establish the genocidal intent behind Myanmar's destruction of the Rohingya community. Pending release of the full report, Phil Robertson, Human Rights Watch's deputy Asia director, said the panel's findings were “what would have been expected from a nontransparent investigation by a politically skewed set of commissioners working closely with the Myanmar government."