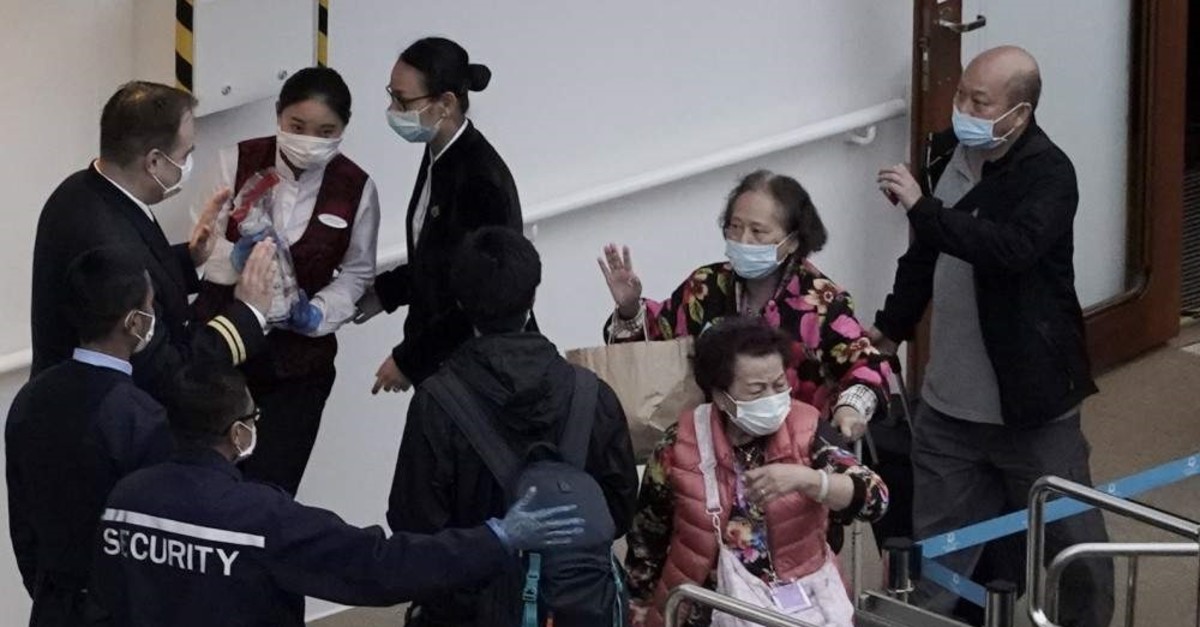 Passengers from the cruise ship World Dream, docked at Kai Tak cruise terminal, leave the ship after being quarantined for the coronavirus in Hong Kong, Sunday, Feb. 9, 2020. (AP Photo)
by Feb 09, 2020 9:51 pm

Thousands of people stranded aboard a cruise ship in Hong Kong for five days were allowed to disembark on Sunday after its 1,800 crew members tested negative for the deadly new coronavirus.

Health authorities in the semi-autonomous Asian financial hub said the crew and a similar number of passengers had been released from a quarantine imposed because of fears some staff could have contracted the deadly virus on a previous voyage and passed it on.

The World Dream carried three Chinese passengers to Vietnam between Jan. 19 and 24 who were later found to be infected with the SARS-like coronavirus, which has killed more than 800 people in China since it emerged in December.

The government grounded the ship on its arrival in Hong Kong Wednesday while tests were carried out on the crew, but said the passengers need not undergo examinations as they had no contact with the three sick holidaymakers on the January trip.

First found in the city of Wuhan in central China last December, the virus has infected more than 37,200 people on the Chinese mainland and at least 36 in Hong Kong.

The passengers and crew isolated on the vessel had been expecting to stay aboard until Tuesday after Hong Kong authorities said testing would take at least four days.

But chief port health officer Leung Yiu-hong said Sunday "all tests have results this afternoon and are all negative."

He added that passenger testing was deemed unnecessary because they were at relatively low risk. All 3,600 onboard will not be required to self-quarantine after leaving.

As he left the ship, passenger Rocky Chan said quarantine conditions had been "okay," though his time on board had caused him a few problems.

"My job was somewhat affected due to the time I had to spend here," he said but added that a letter he received from the Department of Health should smooth out any issues.

Vice president of marketing at Dream Cruises, Phoebe Yip Ching-man, said the company arranged for dozens of coaches to take passengers into the city, while free hotel rooms were booked for the more than 100 foreign passport holders on board who needed them.

Hong Kong on Saturday began enforcing a 14-day quarantine period on all people arriving from mainland China in a fresh bid to curb the spread of the virus.

The city's health minister on Sunday morning said 468 people had so far been ordered to stay at home, in hotel rooms or at a government quarantine camp since the policy took effect.