Costs of cheating scandal will be piling up for Volkswagen 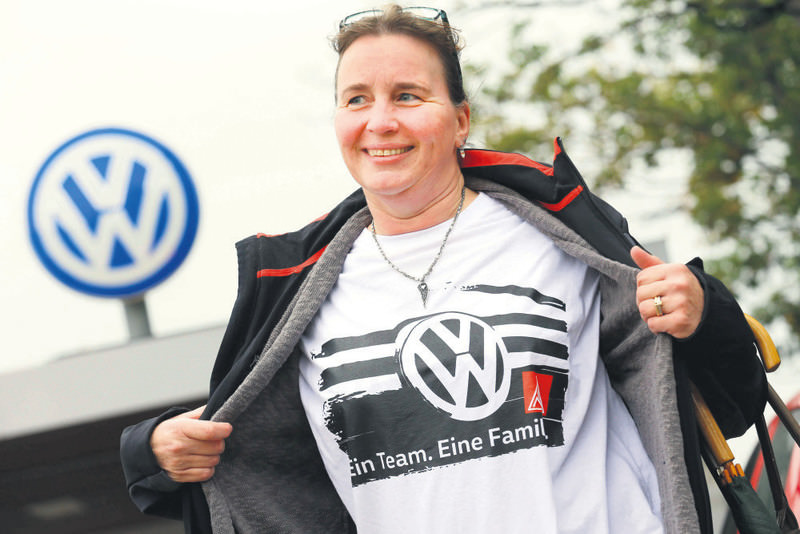 An employee poses while wearing a union T-shirt prior to a Volkswagen staff meeting in Wolfburg, yesterday.
by Associated Press
Oct 07, 2015 12:00 am

According to analysts, the costs of fines, lawsuits and recalls could ultimately exceed 35 billion euros. VW CEO Mueller also said the 6.5 billion euros the company has set aside for the cheating scandal will not be enough

For Volkswagen, the cost of its cheating on emissions tests in the U.S. is likely to run into the tens of billions of dollars and prematurely end its long-sought status as the world's biggest carmaker.

As well as fines from governments, Volkswagen faces the massive expense of recalling up to 11 million cars globally.

Already the company has set aside 6.5 billion euros ($7.3 billion) to cover the fines and recalls but it's a fair bet that's only the start. Some experts estimate the bill could ultimately be five times as large. Beyond initial charges, the company is expected to suffer a drop in sales. And the damage to the brand's image could take years to heal. "This is damaging stuff that goes way beyond negligence and incompetence," said Jeremy Robinson-Leon, principal and chief operating officer at New York-based PR firm Group Gordon. "The issue here is fraud and pretty brazen fraud at that."

Here's a look at the financial reckoning the Wolfsburg, Germany-based automaker will face. The blows could fall in multiple areas.

The costs of fines, lawsuits and recalls are hard to estimate but have the potential to snowball. Marc-Rene Tonn, an analyst at Warburg Research, says they could ultimately exceed 35 billion euros ($39 billion).

A chunk of that would come from fines from the U.S. Environmental Protection Agency, which could amount to as much as $18 billion. In theory, each of the 482,000 cars identified as having the deceptive software could be slapped with a $37,500 penalty. The actual fine will likely be much lower if the company cooperates with authorities. Tonn says it could reach 12.5 billion euros ($14 billion).

The carmaker faces dozens of lawsuits from U.S. states and counties. Volkswagen may also face fines in other countries where it sold such rigged cars if there is evidence it cheated on emissions tests there, too. It is bein

g investigated in Germany and other European countries.

Customers who feel cheated are going after Volkswagen as well, with several class-action lawsuits already filed in the U.S. and Europe. That could amount to billions more in damages. And the cost of recalling and fixing the cars could run 2 billion euros ($2.2 billion) beyond what Volkswagen set aside, Tonn wrote in a research note to investors. Tonn halved his profit forecast for this year to 6.4 billion euros. For 2016, he reduced it to 11.0 billion euros from 15.7 billion euros. Volkswagen has strong finances, starting with 20 billion euros in net industrial cash. It needs to keep at least 10 billion euros of that however to maintain its credit rating.

Meanwhile, VW chief Matthias Mueller said yesterday the 6.5 billion euros ($7.3 billion) the company has set aside in the third quarter for costs from its emissions cheating scandal won't be enough. "It includes the estimated cost to fix the affected vehicles," he told employees. "But it won't be enough. We must prepare for significant penalties. And many could take the events as an opportunity to claim damages against Volkswagen."

Volkswagen is expected to see a drop in interest in its cars because of the scandal, especially in the United States. Already in September, Volkswagen's sales in the U.S. barely grew despite the wider market's double-digit growth, as it had to halt sales of many diesel vehicles. Auto analyst Ferdinand Dudenhoeffer at the University of Duisburg-Essen estimates that Volkswagen could see vehicle sales fall by up to 10 percent globally next year. Earnings could take a bigger hit, as the company may have to hold down prices through purchasing incentives in order to maintain sales. To make matters worse, the scandal comes just as demand is slowing in China, where Volkswagen's brands are heavily exposed. As for the company's strategic goal of maintaining its lead over Toyota as the world's biggest automaker, Dudenhoeffer says, "Forget about it."

The scandal has caused Volkswagen's shares to drop by about 40 percent, lopping off about 30 billion euros ($33 billion) from the company's market value. That hit has been taken mostly by its big shareholders: the Piech and Porsche families, who control over 50 percent of the company, and the other major shareholders: the state of Lower Saxony and Qatar Holdings.