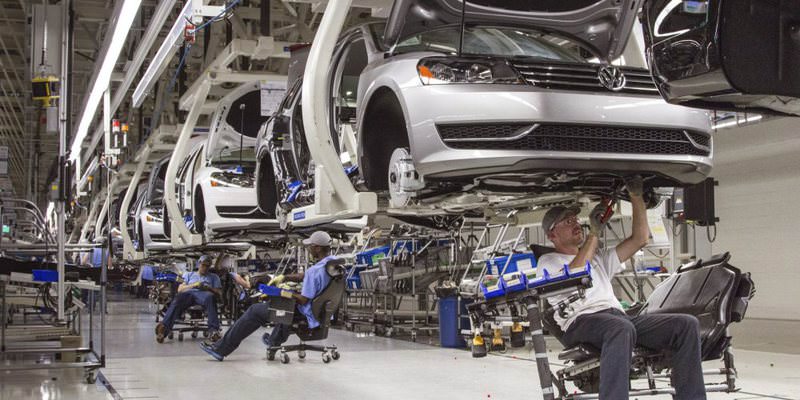 by Daily Sabah with Wires
Oct 13, 2015 12:00 am
The European Investment Bank (EIB) could recall loans it gave to Volkswagen, its president told a German newspaper. Werner Hoyer told Sueddeutsche Zeitung that the EIB gave loans to the German carmaker for things like the development of low emissions engines. He said they could be recalled in the wake of VW's emissions cheating. The paper reported that about 1.8 billion euros of those loans are still outstanding. Hoyer is quoted as saying that the EIB had granted loans worth around 4.6 billion euros to Volkswagen since 1990.

"The EIB could have taken a hit [from the emissions scandal] because we have to fulfil certain climate targets with our loans," the Sueddeutsche Zeitung quoted Hoyer as saying.

He added that the EIB would conduct "very thorough investigations" into what VW used the funds for. Hoyer told reporters that if he found that the loans were used for purposes other than intended, the EU bank would have to "ask ourselves whether we have to demand loans back." He also said he was "very disappointed" by Volkswagen, adding the EIB's relationship with the carmaker would be damaged by the scandal. Meanwhile, Martin Winterkorn, the former boss of Volkswagen who quit last month, will step down from his remaining posts at the company, the Sueddeutsche Zeitung newspaper and TV stations NDR and WDR reported, without citing their sources. The resignations are expected in the coming days, as soon as a few remaining formalities have been dealt with, they said, adding the decision comes after the German state of Lower Saxony, VW's second-biggest shareholder, put pressure on the former CEO.

VW has so far said it was up to the supervisory boards of the companies in question to take any decision about Winterkorn's future involvement. Elsewhere, Volkswagen is recalling 1,950 diesel vehicles in China to correct engine software that the automaker has admitted cheats on emissions tests, according to AP.

The recall applies to 1,946 Tiguan sport utility vehicles and four Passat B6 sedans, all of them imported, the company said yesterday. It said technical solutions are being developed and have yet to be submitted to Chinese authorities for approval.

Volkswagen's business in China, the largest auto market by number of vehicles sold, has suffered little impact from the global emissions scandal due to the lack of popularity of diesel cars among Chinese drivers. But foreign companies are closely watched by Chinese authorities, and state media publicize suggestions of misconduct. Diesel is widely used in trucks in the world's second-largest economy, but powered just 0.3 percent of autos sold last year in China, or a few thousand units. Volkswagen is, along with General Motors Co., one of the most popular vehicle brands in China, but is struggling with an unexpectedly sharp downturn in the market and fast-changing consumer tastes. Auto sales in China declined in August for a third straight month, contracting by 3.4 percent from a year earlier.

The president of VW China, Jochem Heizmann, told reporters in April that the company lagged overall market growth because it lacked products in the budget SUV segment, where sales are surging. In 2013, Volkswagen recalled 384,000 vehicles in China to fix gearboxes after state television publicized complaints about them.