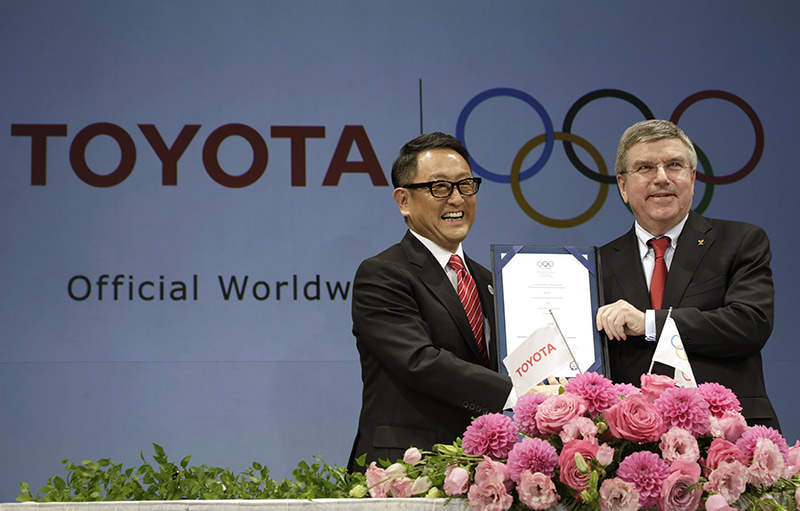 The committee said that Akio Toyoda is expected to be replaced by the president of Panasonic, Kazuhiro Tsuga.

Toyoda is also a member of the Japanese business federation's committee for the Olympics. Organizers said Toyoda may have been concerned about serving on both committees, as the Olympic body is seeking support from the business community.

Toyota Motor is a major sponsor of the Olympics.

Toyoda said in a statement that he decided to reorganize his roles to intensify his efforts to encourage business support for the 2020 Games. He said he is "looking forward to forging even closer ties between the organizing committee and Japan's business community."

Also Monday, Muto said the cost of the games will be much higher than the original estimate of just over 300 billion yen ($2.5 billion), though he did not give a specific figure, saying officials are still sorting out and compiling cost estimates.

Muto said the initial estimate Japan provided to the International Olympic Committee was "bare minimum" and that costs for anti-terrorism measures, additional events, transportation, land lease and other necessities would have to be added.

"There is no doubt that a new cost estimate would swell because of the need for previously unanticipated spending such as counterterrorism measures," he said.

Tokyo Olympics organizing committee chairman and former prime minister Yoshiro Mori has said the total cost could be as much as 2 trillion yen ($16.5 billion).

Muto said the organizing committee plans to submit its latest cost estimate to the IOC by next summer.

Toyoda's sudden resignation and the confirmation of rising costs are the latest in a series of setbacks for the Olympic preparations. Japan had to scrap its original plans for the main stadium because of soaring costs, and then faced a plagiarism scandal over the logo for the games.