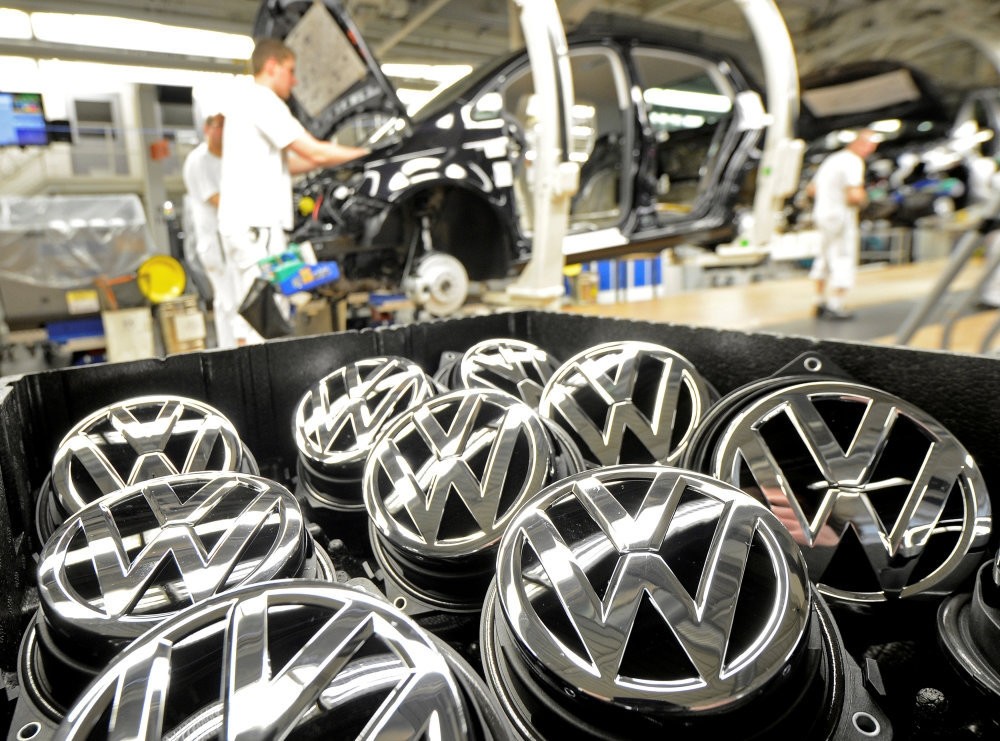 Volkswagen emblems are pictured in a production line at the plant of the German carmaker in Wolfsburg.
by reuters Aug 24, 2016 12:00 am

The German car giant reached a deal with CarTrim and ES Automobilguss, the suppliers of seat covers and gearbox parts to resume deliveries after a stoppage that forced the group to halt production at several plants

Volkswagen and two of its parts suppliers Wednesday resolved a contract dispute that had hit output at more than half of the carmaker's German plants and threatened to undermine its recovery from a diesel emissions scandal. After more than 20 hours of negotiations that went on through the night, VW said it had had settled its differences with CarTrim, which makes seats, and ES Automobilguss, which produces cast iron parts needed to make gearboxes, but gave no further details. The suppliers confirmed an agreement had been reached.

The suppliers were seeking compensation for lost revenue they said ran into tens of millions of euros after VW cancelled a contract. The dispute affected about 28,000 workers at six of VW's 10 German factories on Monday when the automaker halted production of the top-selling Golf and Passat models, as well as assembly of engines, gearboxes and emissions systems.

VW said yesterday that the suppliers had agreed to start delivering parts again and that the affected plants would gradually resume production. Faced with billions of euros of costs from its emissions scandal, VW had previously indicated it would seek price cuts from its suppliers.

Lower Saxony Economy Minister Olaf Lies, a member of VW's supervisory board, has said the dispute was hitting VW "at the worst possible time". Whether VW management should face questions for over-reliance on single suppliers needs to be clarified, he added. Analysts at UBS estimated that a one-week production halt at VW's Wolfsburg headquarters would result in about 100 million euros ($113 million) in lost gross profit, and could have knock-on effects on other suppliers.

Pressure had been growing on both sides to resolve the dispute, with Germany's economy ministry warning of the broader impact on jobs. Five hundred companies that supply parts for the Golf were being forced to build up inventories because the carmaker was not buying, according to the German Association of Supply Chain Management, Procurement and Logistics. In addition, VW's customers face delays in the delivery of new cars, which could prompt them to cancel purchase contracts and switch to other brands.

"The consequences for the entire supply chain are already considerable today," Christoph Feldmann, managing director of the association, said in a statement. While the disruption may keep workers at home, there could be a silver lining for VW in limiting Golf output. The automaker had already cancelled Golf production shifts on October 4-7 and December 19-22 due to falling demand. VW said the stoppages were part of regular production adjustments. "Given the slowdown of VW sales (excluding China), the brand certainly needs to slightly trim production levels," said London-based Evercore ISI analyst Arndt Ellinghorst.
RELATED TOPICS