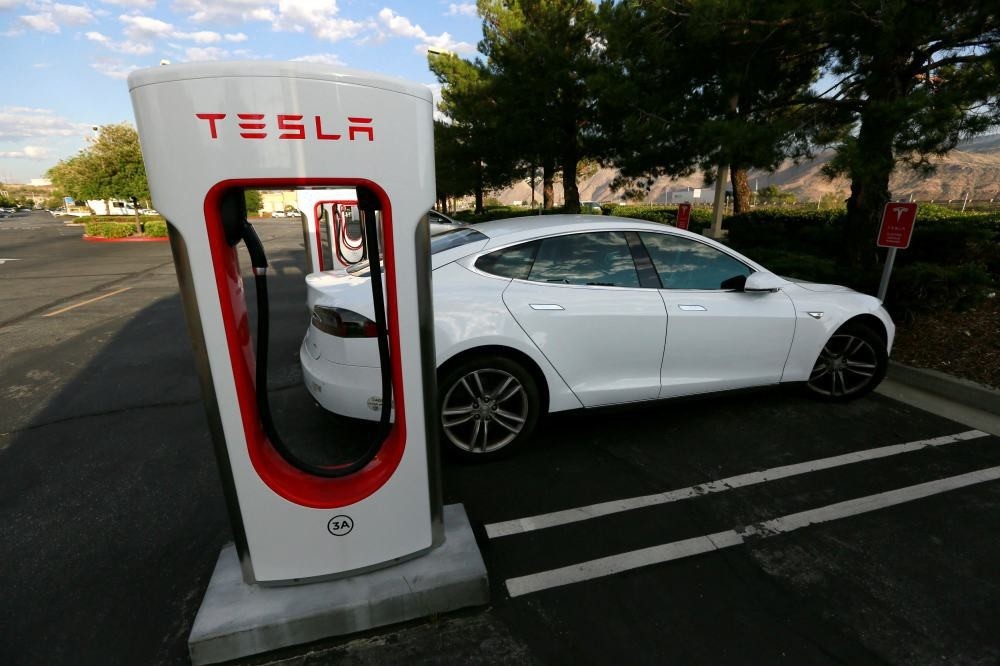 A Tesla Model S charges at a Tesla Supercharger station in Cabazon, California.
by French Press Agency - AFP Aug 25, 2016 12:00 am
Tesla on Tuesday unveiled speedy new model electric cars capable of traveling more than 300 miles (482 kilometers) before needing to be recharged. A Model S P100D with "Ludicrous mode" was billed by Tesla founder Elon Musk as the third fastest accelerating production car ever made, capable of going from zero to 60 miles per hour in 2.5 seconds. That is slower only than the LaFerrari and the Porsche 918 Spyder two-seaters, according to Tesla. In contrast, the Model S P100D sedan has four doors and seating for five adults, two children and some cargo.

A 100-kilowatt battery increases the range to an estimated 315 miles by U.S. regulatory standards, or 613 kilometers by a European Union standard, making it the first electric production vehicle to break the 300-mile barrier, according to Tesla. The new Model S had a starting price of $135,000.

"While the P100D Ludicrous is obviously an expensive vehicle, we want to emphasize that every sale helps pay for the smaller and much more affordable Tesla Model 3 that is in development," the car maker said in a blog post. The larger battery pack is also available on the Tesla Model X, making the world's fastest SUV even quicker and giving it a range of up to 289 miles on a charge. Early this month, Tesla Motors reported a larger second-quarter loss than expected as it worked to speed production in the face of strong demand for its electric cars. Tesla reported a net loss of $293.2 million, or $2.09 per share, in the quarter ended on June 30, up from a $184.2 million loss in the same period a year earlier. Revenue at the California-based company climbed to $1.27 billion in the second quarter from $955 million a year ago. Tesla is touting the new models as it faces a wave of bad publicity about self-driving capabilities in its electric vehicles. A fatal accident in the United States and other less serious incidents in China prompted concerns about the safety of autonomous driving systems, but Tesla remained devoted to improving the technology.
RELATED TOPICS