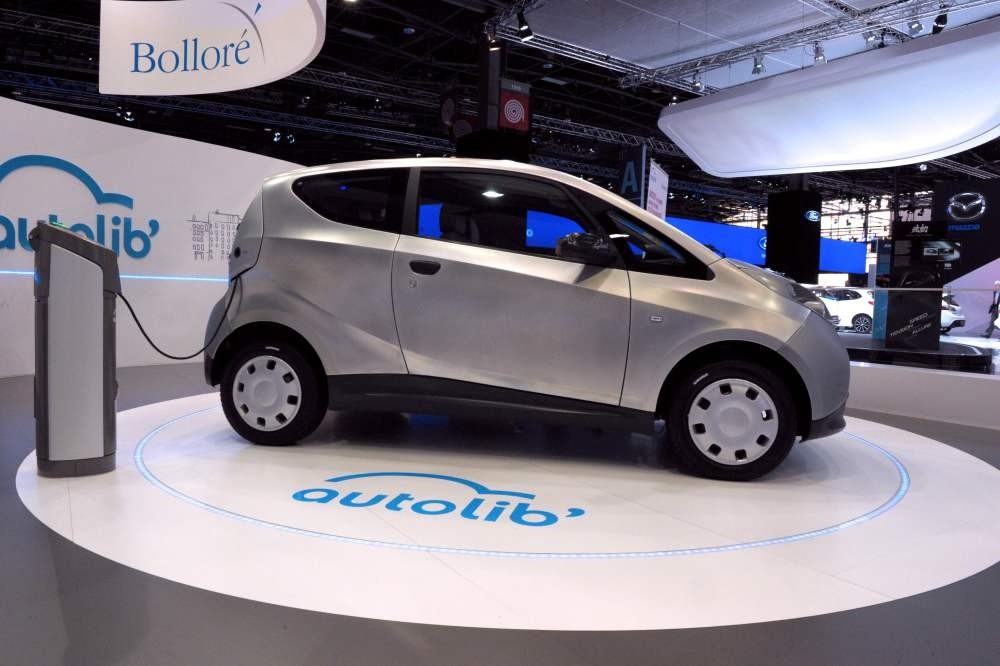 An Autolib electric bluecar for the point-to-point electricrental cars system displayed on the Bollore stand during the press days of the Paris Motor Show.
by Feb 03, 2017 12:00 am

The falling costs of electric cars and renewable technology may halt the growth in global oil demand. The current boom in electric vehicles is on track to displace 2 million barrels of oil per day by 2025

Oil companies underestimating the global market for electric vehicles could be caught unaware by weakened demand for petrol within a decade, analysts said Wednesday. Falling costs of electric cars and renewable technology may halt growth in oil demand as early as 2020, they argued in a report. The current boom in electric vehicles is on track to displace two million barrels of oil per day by 2025, they calculated. A similar drop in demand preceded the collapse of oil prices in 2014. By 2035, that figure could quintuple, with electric cars accounting for a third of the road transport market, said the report, jointly issued by the financial think tank Carbon Tracker and the Grantham Institute, both in located London. The power and road transport sectors account for about half of fossil fuel consumption, so growth in solar energy and electric vehicles can have a major impact on demand.

"Very few companies or institutions in the energy industry are really considering the upside if the technology explodes and grows exponentially," he said.

Oil and gas giant BP, for example, predicted last week that oil demand from cars would continue to rise well into the mid-2030s. In 2035, electric vehicles will only make up six percent of the global car fleet, it said in its 2017 Energy Outlook. Other fossil fuel companies have made similarly rosy forecasts for oil demand. Non-industry analysts are split on how quickly electric vehicles will displace those powered by internal combustion engines. The 29-nation International Energy Agency (IEA), formed after the 1973 oil crisis, sees relatively modest growth, resulting in an eight percent market share, about 150 million vehicles, by 2040, and only 1.3 million barrels of oil displaced per day.

Even their prescriptive "450 parts per million (ppm)" forecast, a blueprint for energy growth deemed consistent with capping global warming at 2 degrees Celsius (3.6 degrees Fahrenheit), only foresees 710 million electric vehicles by that date.

Holding warming to 2 degrees Celsius is the core goal of the 196-nation Paris climate treaty. But the IEA's poor track record for forecasting solar and wind growth suggests estimates for electric cars may be too conservative as well.

Private forecaster Bloomberg New Energy Finance's estimates, by contrast, are much closer to the new figures: a 22 percent market share for electric vehicles by 2035. The disagreement on how quickly fossil fuel companies may face falling demand, and possibly stranded assets, is built into the assumptions behind the forecasts.

"We assume the electric vehicles will be cheaper than oil-burning combustion engine vehicles from 2020 onward," Sussams explained.

The Carbon Tracker model also presumes very rapid growth, and an absence of bottlenecks, such as a shortage of charging stations. China, the largest market in the world for electric vehicles, sold more than half-a-million in 2016. "That is close to exponential growth," Sussams said.

The forecasts are also in line with those of major car makers, including Tesla, GM, and major European manufacturers. The 60-page report entitled, "The disruptive power of low-carbon technology," notes that a 10 percent loss of the power market-share caused the collapse of the U.S. coal mining industry. Similarly, Europe's five major utilities lost more than 100 billion euros ($105 billion) in value from 2008 to 2013 "because they were unprepared for an eight percent growth in renewable power."
Last Update: Feb 03, 2017 1:21 am
RELATED TOPICS