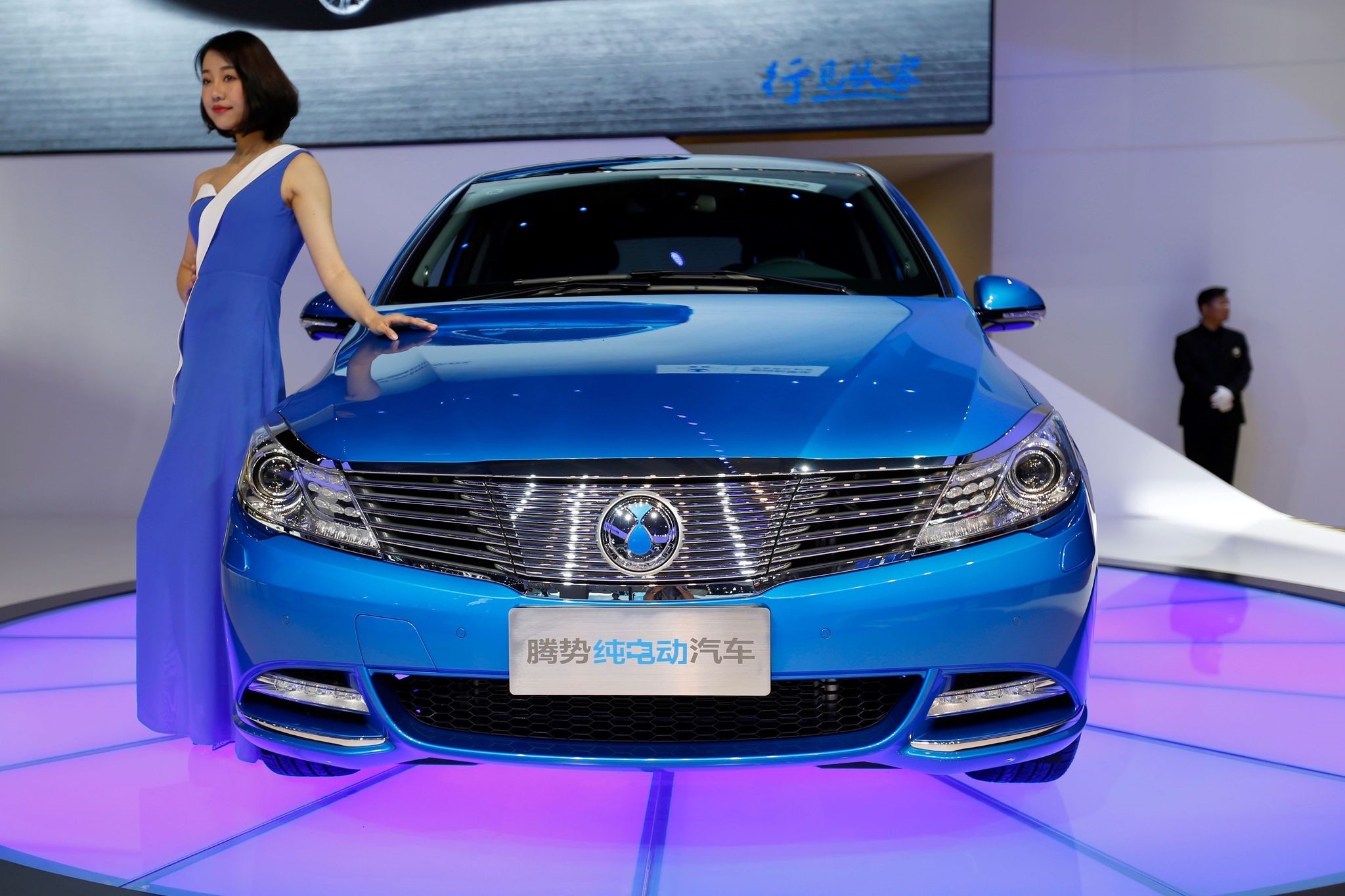 A DENZA EV car displayed during the first day of the 17th Shanghai International Automobile Industry Exhibition in Shanghai.
by Apr 24, 2017 12:00 am
China's electric-car market is already the world's biggest, but a government proposal to introduce "new energy" vehicle quotas for automakers is further charging it up. With the threat of the measure looming, major manufacturers at the annual auto show in Shanghai are announcing big plans to boost their electric vehicle (EV) offerings in China.

Volvo has confirmed it will introduce its first 100-percent electric car in China in 2019, while Ford will market its first hybrid vehicle in early 2018 and envisions 70 percent of all Ford cars available in China will have electric options by 2025.

Industry players say the push could have a profound impact on the green-car sector, as resulting economies of scale bring down the costs of producing and buying such cars. Chinese sales of "new energy" vehicles jumped 53 percent last year to 507,000 units, fuelled by government incentives. Overall, a world-leading 24.38 million passenger cars were sold in China in 2016.

"But we do believe that in the very near term, as we scale up more batteries, the cost will come down."

China has offered incentives for EV purchases to help fight chronic air pollution, but has begun scaling back those inducements this year, causing sales to stumble. Instead, the government intends to force the hand of manufacturers. A proposal published in September could require "green" vehicle production quotas as early as 2018, under a complex system of earned credits.

Market leader Volkswagen sold four million cars in China in 2016 but only a few hundred were "green". The German manufacturer now plans to begin production of an electric car in China next year, in a joint venture with Chinese group JAC. VW expects to sell around 400,000 new-energy vehicles in China in 2020, said Jochem Heizmann, CEO of Volkswagen China. The quota plans have brought some pushback, with German Chancellor Angela Merkel lobbying Chinese Premier Li Keqiang over the issue. Chinese Industry Minister Miao Wei said in March that a reduction or deferral of the quotas was possible. But automakers plan to get ready.

"We are fully, with all forces, working to be able to fulfil this quota system already next year," Heizmann said.

General Motors says it plans to launch at least 10 new energy vehicles in China, targeting 150,000 in annual sales by 2020.

The Chinese market is dominated by local manufacturers including sector pioneer BYD, which sold 96,000 EVs last year. Despite the reduced subsidies, "the trend of electrification is

Most electric cars in China already sell for less than 250,000 yuan ($36,000) before subsidies, but they are typically models with a limited range.

"The market above 250,000 doesn't really exist yet," said Hubertus Troska, president of Mercedes China. This has not stopped start-ups from challenging Tesla Motors in the

limited niche for high-end EVs. They include Qiantu, whose 700,000 yuan sports model will be marketed soon; Chehejia, founded by an entrepreneur dubbed the "Chinese Elon Musk"; and Nio, a brand by Chinese electric-car maker NextEV that has received investment from deep-pocketed Chinese IT giants Tencent and Lenovo.

"We feel that now in China, first- and second-tier cities have this need (for premium electric cars), but it is yet to be satisfied."
RELATED TOPICS