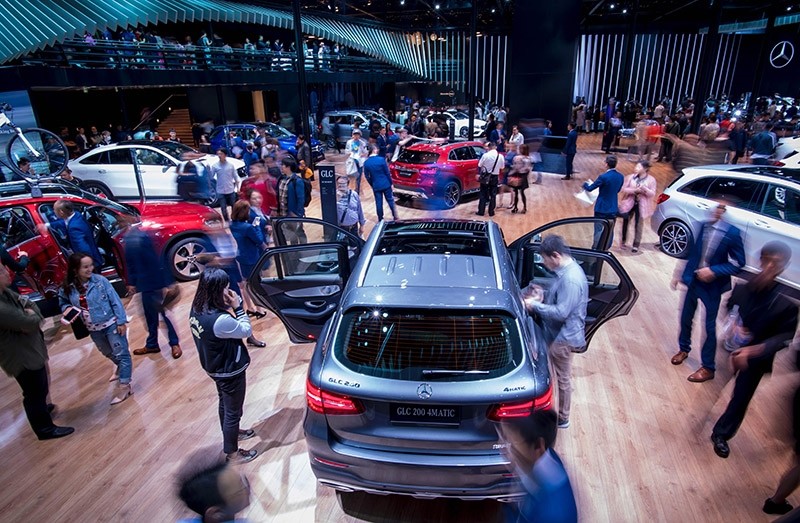 Visitors look at vehicles by German carmaker Mercedes during the public day of the 17th Shanghai International Automobile Industry Exhibition in Shanghai on April 24, 2017. (AFP Photo)
by Apr 25, 2017 12:00 am

China is targeting 35 million vehicle sales by 2025 and wants new energy vehicles (NEVs) to make up at least one-fifth of that total, the industry ministry said on Tuesday.

The Ministry of Industry and Information Technology said in a market "road map" that China's urbanization drive and the overseas expansion of its automakers would help drive annual vehicle sales up around 25 percent from last year's total.

Automakers in China, the world's largest automobile market with sales of 28 million vehicles in 2016, are increasingly pushing into electric and hybrid vehicles to meet stringent new government quotas.

Sales of new energy vehicles should reach 2 million by 2020 and account for more than 20 percent of total vehicle production and sales by 2025, the ministry said. That implied annual NEV sales of over 7 million within the next decade.

Green energy car sales have risen dramatically on the back of government policies, but still represented less than 2 percent of China's overall auto market last year.

The government body also said it would push to create local champions in the industry who would be increasingly competitive with overseas rivals in China as well as in overseas markets.

"The quality of Chinese brand vehicles has clearly risen, while brand recognition, reputation and global influence are much stronger," the MIIT said. "By 2025, we should have some Chinese vehicle brands that are in the global Top 10 by sales."

MIIT added it would look to loosen rules on foreign joint ventures in the market. Currently, overseas carmakers, such as General Motors or Nissan Motor Co, are limited to a 50 percent state in a China JV.

"We will loosen joint venture ownership restrictions in an orderly manner," MIIT said, without elaborating about a time frame or what stake foreign carmakers may be able to own.

The ministry added that Chinese carmakers would also look to increase exports to developed nations over the next decade, and improve battery technology for electric vehicles.