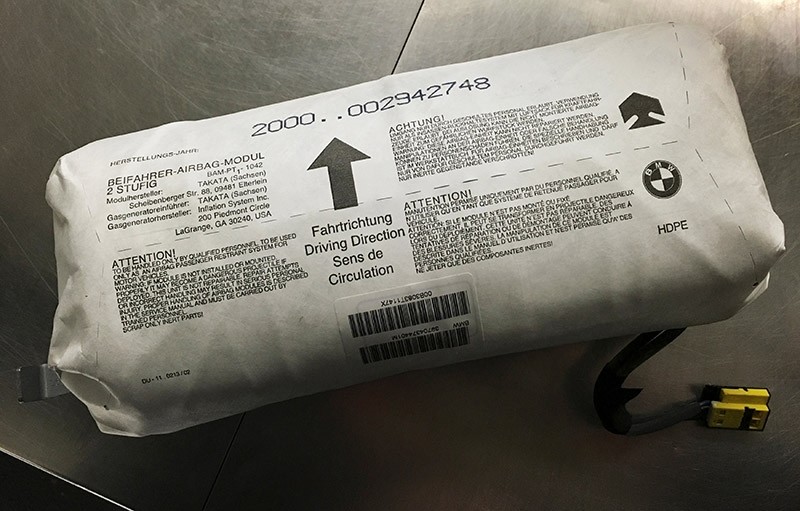 A Takata airbag that was removed from a 2001 BMW vehicle under a factory recall program is shown in Alexandria, Virginia December 26, 2015. (Reuters Photo)
by Compiled from Wire Services Jul 12, 2017 12:00 am

Takata air bag inflators are already linked to 17 deaths and more than 180 injuries worldwide, and the recalls will eventually cover about 125 million inflators. The auto safety agency said new testing is prompting the recall of some driver-side air bags built from 2015 through 2012.

Nissan said it will recall 627,000 Versa cars from 2007-2012 model years, including 515,000 in the United States "out of an abundance of caution." It will notify owners within 60 days with additional instructions.

Ford spokesman John Cangany said the issue covers about 2.2 million Ford vehicles, and the company has five days to respond to the Takata filing. The automaker is "aware of Takata's submission, and we have been in regular contact with the agency on the issue. Importantly, we aren't aware of any incidents, and test data doesn't suggest any issues," he said.

Takata inflators can explode with too much force and spew shrapnel into drivers and passengers. The company uses the chemical ammonium nitrate to inflate air bags. But it can deteriorate when exposed to high airborne humidity and high temperatures. Previously the company believed that a drying agent called a desiccant stopped the chemical from degrading.

But the National Highway Traffic Safety Administration said that tests done by Takata show that for the first time, a type of desiccated inflator "will pose a safety risk if not replaced."

"Takata has told the public that their line of air bag inflators with moisture absorbent was safe. This recall now raises serious questions about the threat posed by all of Takata's ammonium nitrate-based airbags," U.S. Senator Bill Nelson said in a statement. "If even more are found to be defective, it will take us from the biggest recall ever to something that could become mind-boggling."

Honda Motor Co said Monday it had confirmed an 11th U.S. death involving one of its vehicles tied to a faulty Takata air bag inflator.

Crushed by mounting recall and legal costs, Takata filed for bankruptcy last month in the U.S. and Japan, saying it was the only way to ensure it could keep supplying replacements for faulty inflators. Most of the company's assets will be bought by rival Key Safety Systems for about $1.6 billion (175 billion yen). Remnants of Takata's operations will continue to make inflators to be used as replacement parts for 19 affected automakers.