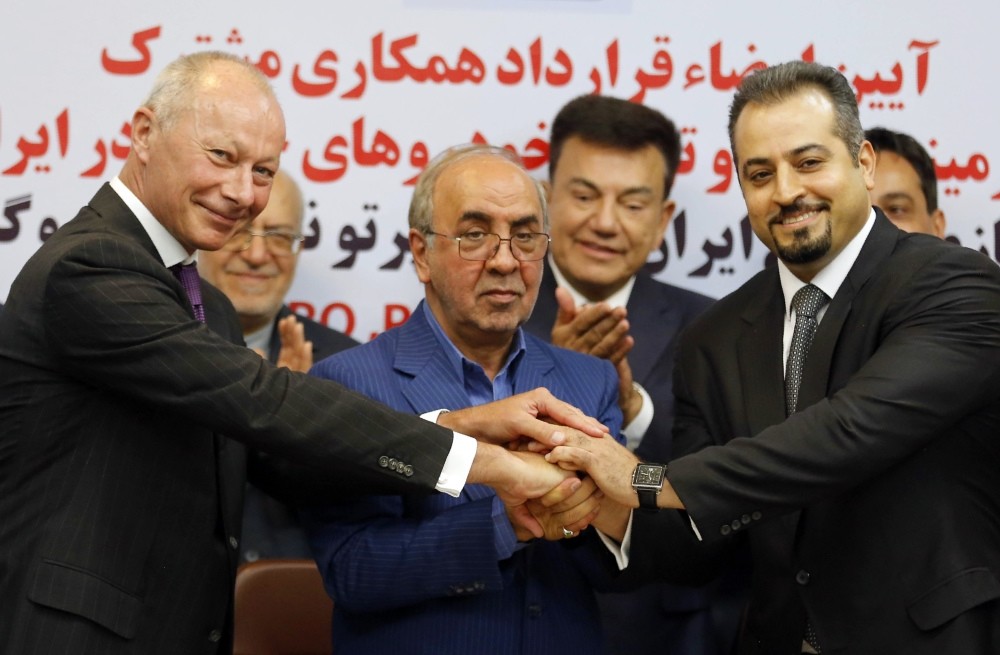 (L to R) Bollore, deputy director of competitiveness at Renault, Moazami, chairman of the board of directors of the IDRO Group, and Solouk, deputy director of the Iranian Automobile Importers Association, shake hands in Tehran Monday.
by Associated Press Aug 08, 2017 12:00 am

The U.S. legislation also imposed new sanctions on Russia and North Korea. During the ceremony in Tehran, Iran's Minister of Industry Mohammad Reza Nematzadeh said the deal with Renault would "establish a research and development center for designing" in the country. A Renault executive, Thierry Bollore, said it would help transfer technology to Iran. The car deal is expected to create about 3,000 jobs for the two Iranian companies involved: IDRO, or the Industrial Development and Renovation Organization of Iran, and the privately owned Negin Group. Renault has a 60 percent partnership in the deal.

The plant in a Tehran suburb will produce Duster and Symbol cars starting in 2018. Renault will be majority shareholder, and have its own distribution network in Iran for the first time. Last year, French carmaker PSA Peugeot Citroen reached a deal with Iran Khodro to open a plant producing 200,000 vehicles annually. Peugeot was a major player in Iran's car market before international sanctions were imposed over Iran's controversial uranium enrichment program -a possible pathway to nuclear weapons.

At the time, PSA group said negotiations for the deal began before the sanctions were lifted. France and other European nations have moved quickly to create stronger business ties with Iran's large market since international sanctions were lifted. On Sept. 2016, during the Paris auto show, when Iran's President Hassan Rouhani visited Paris, Renault reached a deal with Iran's government to open the plant with IDRO. Iran produces about 1,350,000 vehicles a year, though authorities hope that number will reach 3 million annually by 2025.