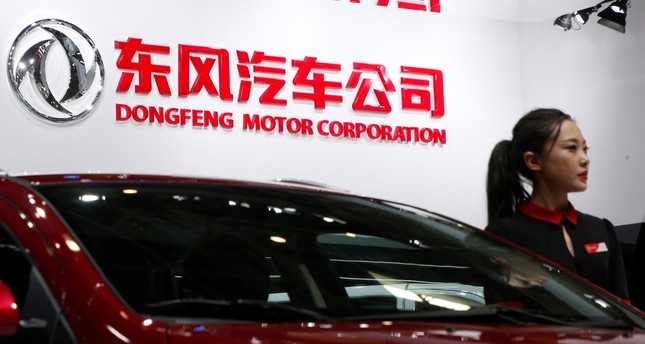 A hostess poses next to a Dongfeng Motor Corp A9 sedan at the Auto China car show in Beijing.

Automakers Renault and Nissan say they will develop electric cars with a Chinese state-owned partner, adding to a series of tie-ups between global auto brands and local partners in the biggest electric vehicle market. The venture Dongfeng Motor Corp. aims to develop a vehicle based on an SUV platform shared by Renault and Nissan, the companies announced yesterday. Production is due to begin in 2019. Global automakers are investing heavily to develop electric vehicles for China, responding to rising demand and government pressure on the industry to speed up technology development. Chinese planners see electrics as a promising industry and a way to clean up smog-choked cities.

They have supported sales with subsidies to buyers, while a proposed quota system will require automakers to meet targets for electric vehicle production or buy credits from competitors that do. Sales of pure-electric and gasoline-electric hybrids in China rose 50 percent last year over 2015 to 336,000 vehicles, accounting for 40 percent of global demand. U.S. sales totaled 159,620. Renault SA and Nissan Motor Corp. have a wide-ranging alliance to share technology and production that also includes Mitsubishi Motors Corp. and has more limited ties with other auto brands. Dongfeng assembles vehicles for Nissan, Kia and other foreign brands and owns a share of France's PSA Peugeot Citroen.

"The establishment of the new joint venture with Dongfeng confirms our common commitment to develop competitive electric vehicles for the Chinese market," said Carlos Ghosn, chairman and CEO of the Renault-Nissan alliance, in a statement.

Ford Motor Co. announced last week it was looking at setting up a possible electric car venture with a Chinese partner. General Motors Co., Volkswagen AG and other brands also have announced plans to manufacture electric vehicles in China.

Share on Facebook Share on Twitter
Previous in Automotive Volkswagen is recalling almost 281,000 CC and Passat sedans and wagons... Next in Automotive The European Commission announced on Thursday that new car models...
DAILY SABAH RECOMMENDS