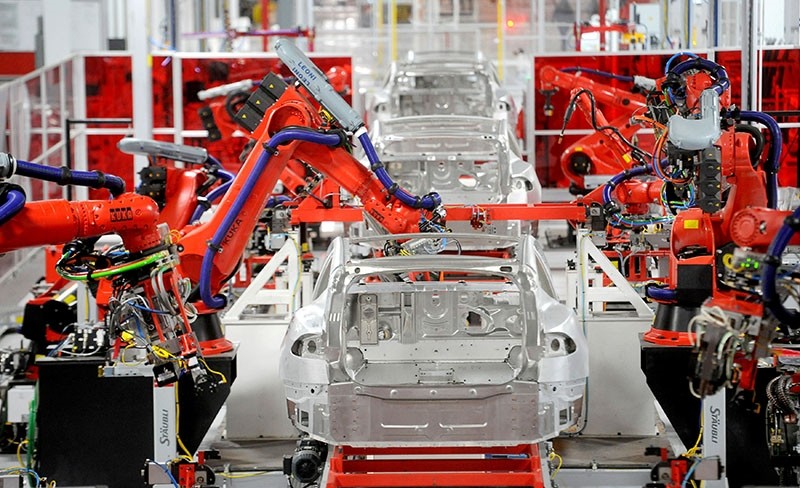 Tesla's record net loss in the first quarter and fast-burn through millions of dollars is raising questions about the company's ability to pay all its bills.

CEO Elon Musk conceded that criticism is valid but said during a sometimes-testy conference call with analysts Wednesday that it's "quite likely" Tesla will make money and have positive cash flow in the third quarter.

"It's high time we became profitable," said Musk, who also promised restructuring this month to achieve profit goals. "The truth is you're not a real company until you are, frankly. That's our focus right now."

Wednesday's results showed Tesla tearing through $745.3 million in cash in the first quarter, due largely to the slow production ramp-up of the Model 3 mass-market electric sedan. The cash burn could put pressure on the company to borrow more or sell additional shares to raise more cash.

When asked by an analyst on a conference call about all-important reservations for the Model 3, Musk cut him off, calling questions dry and "not cool." He then allowed multiple questions from a person via YouTube.

Tesla began the quarter with $3.96 billion in cash and equivalents, but that fell to $3.22 billion by quarter's end.

The company said in April that it won't need more capital this year as it generates added cash as production and sales of the Model 3 grow.

But Model 3 production still isn't near the level of 5,000 per week that Musk promised last year. That's also the level needed for Tesla to make money.

Problems with building Model 3s at a plant in Fremont, California, got so bad during the quarter that Musk has tweeted he's sleeping at the factory, automation is overrated and more humans are needed to build the cars.

The company said in a note to investors Wednesday that Model 3 production is on the rise and that it expects profitability in the second half, under generally accepted accounting principles.

"This is primarily based on our ability to reach Model 3 production volume of 5,000 units per week," the company stated.

In its letter, Tesla said Model 3 production hit 2,270 per week at the end of April, the third straight week that it reached over 2,000.

The company said it improved battery module production during the quarter, overcoming a large bottleneck, and it now expects to hit 5,000 Model 3s per week around early July.

Musk said the restructuring would involve getting rid of third-party contractors that have grown out of control. "We're going to scrub barnacles on that front," he said.

He admitted that Tesla made a mistake by adding too much automation too quickly at the factory.

"We have temporarily dialed back automation and introduced certain semi-automated or manual processes while we work to eventually have full automation take back over," the company said.

Tesla posted a record $709.6 million net loss in the first quarter, which amounts to a loss of $4.19 per share. Excluding one-time expenses such as stock-based compensation, the company lost $3.35 per share. Revenue grew by 26 percent from a year ago to $3.4 billion.

The giant loss in a critical quarter for the 15-year-old company beat Wall Street estimates. Analysts polled by FactSet expected an adjusted loss of $3.54 per share. Revenue exceeded estimates of $3.28 billion.

During the quarter the company burned cash at a rate of $57 million per week.

Shares in Tesla, which is based in Palo Alto, California, fell more than 4 percent in after-hours trading after the earnings report.

Moody's Investor Service downgraded Tesla's debt into junk territory back in March, warning at the time that Tesla didn't have cash to cover $3.7 billion for normal operations, capital expenses and debt that come due early next year. At the end of last year the company had a total of $9.5 billion in long-term debt.

Tesla Inc. has had only two profitable quarters in its nearly eight years as a public company.

The company said it will reduce capital spending for 2018 from $3.4 billion to $3 billion and said it can be cut further based on the cash it generates.

But that could slow future product development. "We wonder what spending is deferred and for how long," CFRA analyst Efraim Levy wrote in a note to investors.

The Model 3 is the most important piece of Tesla's plan to become a mainstream automaker. At one point it had more than 500,000 potential buyers on a waiting list.

Net reservations, including configured orders that had not been delivered, "continued to exceed 450,000" at the end of the first quarter, the company said.

Production bottlenecks have plagued the company, with much of its future banked on the Model 3, its first mid-price, mass-market vehicle.

Making battery packs fast enough has been identified as a bump on the road to cranking out more Tesla cars.

Musk said that the company's northern California plant is "packed to the gills" and that later this year Tesla will decide where to build a second facility at which a new Model Y will be built.

Tesla will also announce a China location for a new "Gigafactory" that will produce batteries as well as vehicles, according to Musk.

"In the future, all Gigafactories will include vehicle production," he said.

The continued struggle to ramp up production comes as Tesla is facing a federal investigation into a recent fatal crash involving Autopilot, its driver assistance system, and the voluntary recall of 123,000 Model S sedans announced last week.

During the call, Musk passionately defended the potential for self-driving cars to dramatically reduce accident fatalities and railed at the media for "inflammatory" headlines that could turn public opinion and regulators against the technology.