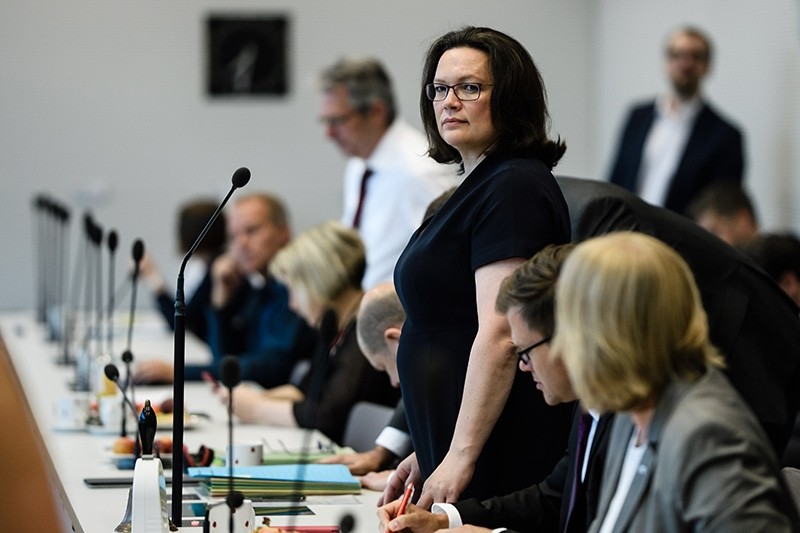 The leader of the Social Democratic Party (SPD) and Chairwoman of the SPD faction Andrea Nahles looks on during the beginning of a faction meeting in Berlin, Germany, July 4, 2018. (EPA Photo)
by daily sabah
Jul 09, 2018 12:00 am

Amid an escalating trade war, Germany hasn't taken it passively that the new U.S. envoy is engaging in closed-door talks with major German automakers.

Leader of the Social Democratic Party (SPD) Andrea Nahles took the issue up against U.S. Ambassador to Berlin Richard Grenell, who has reportedly been in talks with the chiefs of BMW, Daimler and Volkswagen.

"That is news to me that ambassadors hold talks on such issues. What kind of an approach is it?" Nahles told Die Welt am Sonntag newspaper.

Grenell claims his authority as envoy includes such efforts to find a solution in the trade dispute. Nahles vehemently disagreed.

"If the U.S. government wants to talk about tariffs with us, then this issue must be discussed between the U.S. Secretary of Commerce and German Minister for Economic Affairs and Energy Peter Altmaier," Nahles said.

"We are not some kind of banana republic!" she added.

A staunch ally of U.S. President Donald Trump, Grenell has put forward a "zero tariff" proposition that requires both Washington and Berlin to lift all automotive import tariffs from their respective countries.

"If these Tariffs and Barriers are not soon broken down and removed, we will be placing a 20% Tariff on all of their cars coming into the U.S. Build them here!" Trump tweeted last month.

In June, Trump slapped the EU, Canada and Mexico with 25 tariffs on steel and 10 percent on aluminum, sparking a full-blown trade war that has triggered global retaliation.

The U.S. envoy to Berlin has had a rocky time in only a few months at the post. Soon after he began in May, he provoked anger by telling German companies to "wind down operations in Iran immediately."

In June, he was quoted by Breitbart as saying: "I absolutely want to empower other conservatives throughout Europe, other leaders," praising the "European groundswell of conservative policies" that has arisen due to "the failed policies of the left."

Berlin responded curtly by reminding the envoy that his job doesn't include interfering in the politics of the host country. Some lawmakers have even called for Grenell – branded the "Trump vassal" – to be expelled.