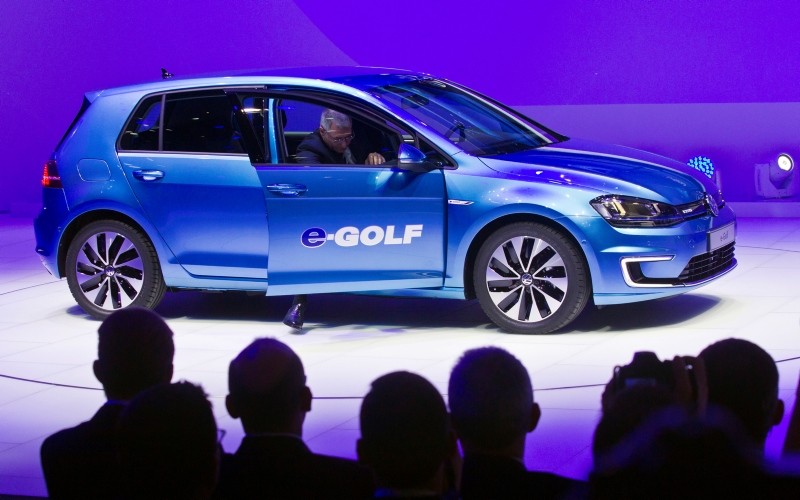 In this Jan 13, 2014 file photo the Volkswagen e-Golf fully electric vehicle is presented at the North American International Auto Show in Detroit, Michigan. (AP Photo)
by Compiled from Wire Services Aug 23, 2018 12:00 am

Volkswagen said Thursday it's launching an all-electric car sharing service in Berlin using its battery powered Golf and Up! models as it seeks to build a business serving people in big cities who don't own cars.

The company said that it planned to expand its" We Share" project to big cities in Europe and North America by 2020.

Volkswagen said it would deploy 2,000 of the compact cars in the first months of next year to build visibility and ensure that there are enough cars available that customers could always find one near them.

It said Berlin was ideal because it was big and densely populated.

Set to begin in the second quarter of 2019, We Share will at first offer 1,500 VW e-Golf compact cars in the capital, with a further 500 smaller e-up! vehicles to be added later.

The cars will gradually be replaced as new models from VW's next-generation "I.D." range become available.

We Share will join other "free floating" car sharing services -- in which autos are left parked around the city for users to book via a mobile phone app -- already long present in Berlin and other major cities around the world.

Executives at the world's biggest carmaker see growth potential of at least 15 percent per year for such offerings in Europe.

But Wolfsburg-based VW faces entrenched competition from the likes of Daimler and BMW, who agreed in March to merge their car sharing apps Car2Go and DriveNow.

VW also has big plans for integrating different forms of transport, with initiatives like electric buses that can be hailed to "virtual stops," currently being tested in German port city Hamburg.

It plans to spend 3.5 billion euros ($4 billion) by 2025 on a suite of projects under its so-called "digital offensive."