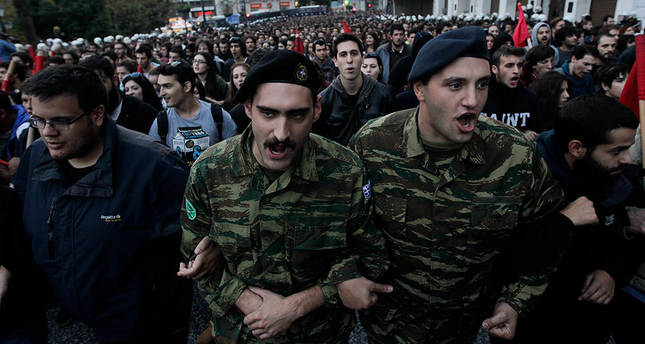 by Nov 17, 2014 12:00 am
Riot police clashed with hooded youths on Monday as more than 30,000 people marched through Athens during an annual rally to commemorate the 1973 student uprising against Greece's then military dictatorship.

Marchers shouted slogans against the government and the International Monetary Fund (IMF) as they made their way past parliament towards the American Embassy in central Athens.

Hundreds of hooded youths clashed with riot police who retaliated by firing tear gas near the embassy.

Fears that this year's rally could turn violent in response to the country's austerity program prompted authorities to deploy more than 7,000 riot police across the city.

As part of the security measures, authorities blocked off major streets in the city as well as metro stations.

Athens' Law School and Athens University of Economics and Business were also fenced off by police and cordons were set up around parliament and the Finance Ministry.

Hundreds of people could be seen laying wreaths and flowers over the past few days at a memorial marking the event.

The 1973 student uprising began after hundreds were killed when tanks rolled onto the Polytechnic School campus. It ended in 1974 with the fall of the seven-year dictatorship.