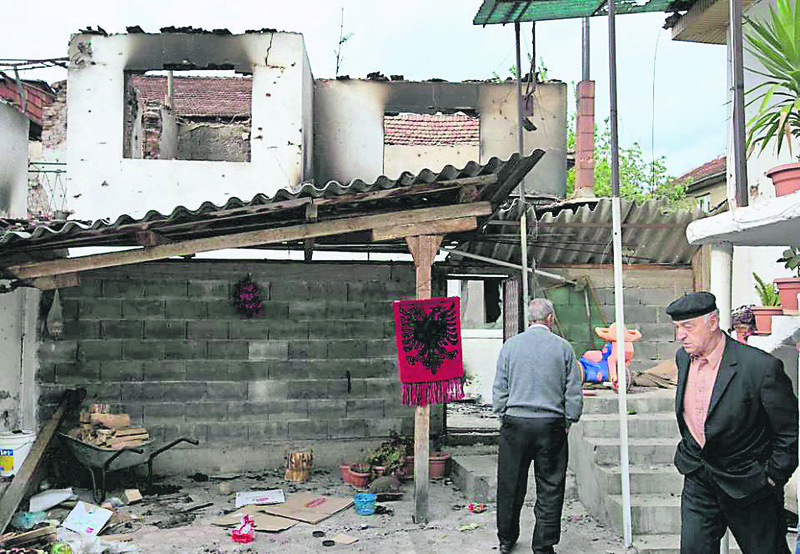 Kumanova's Albanian residents inspect their demolished homes after the police raid.
by May 12, 2015 12:00 am

The fears of 1990s are being recalled after 22 people died in Macedonia's mainly Albanian-populated region, as the country already suffers from poverty and high unemployment rate triggering the ethnic problems between Albanians and Macedonians

Pero Ilievski Street looked on Monday like it had been struck by a tsunami, cobblestones torn up and walls crushed by armoured vehicles of a special anti-terrorist unit of the Macedonian police. Ethnic Albanian residents of this north Macedonian town stepped gingerly through shattered glass and roof tiles, crushed cars and dirt smeared with blood – damage wrought by a weekend operation that left 22 people dead and heralds a new phase of uncertainty in a country deep in crisis. Details about the raid remain hazy, but the conservative government of Nikola Gruevski faced immediate calls from NATO and the European Union for a "transparent investigation" of what went on. Gruevski's credibility with the West has already been called into question by months of opposition allegations of illegal wire-tapping and widespread abuse of power, leaving his government on the ropes with an opposition mass rally planned for May 17. The Albanian residents of Pero Ilievski Street in ethnically-mixed Kumanovo, as well as Gruevski's political opponents, accused the government of trying to create a diversion and blunt the bid to unseat him. "The timing is too suspicious to not consider a connection," said Florian Bieber, a Balkans expert at the University of Graz, Austria. "This does not mean that it was not a terrorist attack, but it suggests that the government might have had a hand. The only obvious beneficiary of the violence is the ruling party."

The tiny, impoverished ex-Yugoslav republic, where ethnic Albanians account for 30 percent of the two million-strong population, flirted with all-out civil war in 2001 when ethnic Albanian guerrillas fought with government security forces before NATO brokered a peace deal. Integration has been piecemeal, but Western diplomats say that while grievances remain, Macedonia is not on the brink of ethnic conflict. A bigger threat to stability lies in the political stand-off over Gruevski's nine-year-rule, fed by frustration among Macedonians and Albanians alike over poverty, high unemployment, pervasive corruption and a stalled progress of integration with the West. "Several distinct problems are joining up into a perfect storm," Balkan analyst Marko Prelec wrote on his Facebook page.

Gruevski said police had wiped out "one of the most dangerous terrorist groups in the Balkans", led by ethnic Albanians from neighboring Kosovo and bent on attacking police stations, shopping malls and sports events. Authorities said 14 "terrorists" were dead, dozens arrested and eight police officers killed. Ethnic Albanian detainees were hauled before judges in handcuffs and white jump-suits. The destruction on Pero Ilievski Street spoke to the ferocity of the violence. "I don't know what the purpose of this was," said Ramadan Baftiu, sitting on the toppled front wall of his two-storey home, gutted by fire and strafed with bullets. Baftiu said he and his family had spent 12 hours in their basement before escaping during a lull in the fighting. "The house has to be demolished," he said. He and his neighbors said they had seen no gunmen in the area, an assertion that was impossible to verify in a climate of claim and counter-claim, intrigue and manipulation in Macedonia. Apart from the police dead, the other casualties have not been named.

Despite the bloodshed, Western envoys to Macedonia pulled no punches following talks with Gruevski on Monday, questioning his government's "commitment" to democracy and European values given its failure to investigate "many allegations of government wrongdoing" arising from a flurry of leaked wire taps. Zoran Zaev, leader of the main Macedonian opposition party, the Social Democrats, says he has a treasure-trove of audiotapes, leaked to him by a whistleblower and exposing tight government control over judges, journalists and the conduct of elections. Protesters have already clashed once with police, and the scandal has added to a wider political malaise rooted in Macedonia's failure to join the EU and NATO, its bids blocked by a long-running dispute with neighboring Greece over the country's name. On Monday, hundreds turned out for the latest in days of small protests in front of the government, this time laying flowers and candles for the weekend's dead. "The citizens of Macedonia are coming together," said protester Jasmina Golubovska, "instead of giving in to the propaganda working to pull us apart."