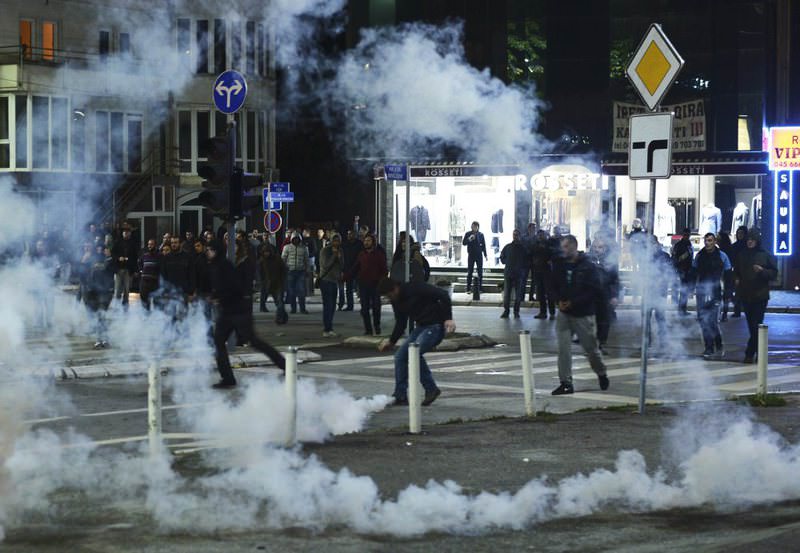 by Daily Sabah with Wires
Oct 14, 2015 12:00 am
Police in Kosovo fired tear gas Monday on dozens of protesters who threw stones and smashed windows after a leading opposition MP was taken in for questioning. Police said 15 policemen and one civilian were injured during the violent protest.

Clouds of teargas filled streets in central Pristina as police drove back several hundred protesters lobbing stones and concrete at the main police station to demand the release of Albin Kurti, a member of parliament and founder of the opposition's Self-Determination party.

Albin Kurti, who last week released tear gas in Kosovo's parliament in protest at agreements reached with Serbia, was held in a police station in downtown Pristina for questioning, police said. While he was being held, around 200 protesters, including opposition MPs, were seen gathered in front of the station hurling stones and smashing its windows.

Kurti, a member of parliament, was released after midnight and told his supporters he would see them at the next rally. "We will not give up. Let's stay united," he said. Nine protesters have been arrested, police spokesman Baki Kelani said yesterday.

The MP has been the leading opponent to Kosovo's dialogue with Serbia - particularly a recent accord in which Pristina agreed to give more financial and legislative rights to its minority Serb community. The opposition believes the move to set up an association of Serb-run municipalities will deepen the ethnic divide and increase Serbia's power in Kosovo.

Along with releasing tear gas, opponents of the deal have blown whistles and thrown eggs to disrupt recent parliamentary sessions.

The government and foreign embassies condemned the incident in parliament on Thursday, when Kurti opened a tear gas canister and kicked it around the floor of the chamber, causing two MPs to faint. This development comes as opposition deputies continue to block the normal functioning of parliament for the third week in row. On Sept. 22, opposition deputies pelted Kosovo Prime Minister Isa Mustafa with eggs. Kosovar deputies began throwing eggs at the prime minister while he insisted that the agreements with Serbia were in full compliance with the Kosovar constitution. Serbia and Kosovo signed four agreements on Aug. 25, namely one on the establishment of an association of Serb majority municipalities.

Kosovo, whose population is predominantly ethnic Albanian, declared independence from Serbia in 2008, but Belgrade fiercely rejected the move and still considers the breakaway territory as its southern province. Kosovo and Serbia were at war in 1998-1999, which ended after Serbian armed forces withdrew from the territory following an 11-week NATO bombing campaign. It has been recognized by over 100 countries, including the U.S., the U.K, France, Germany and Turkey, but not by Serbia or Russia. Ninety percent of Kosovo's 1.8 million people are ethnic Albanians.