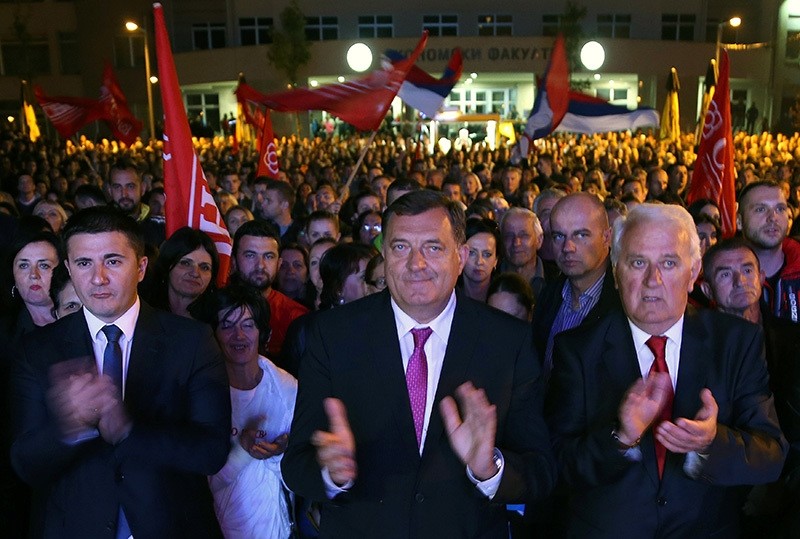 Milorad Dodik (C), President of Republika Srpska, celebrate the results of a referendum over a disputed national holiday during an election rally in Pale, Bosnia and Herzegovina, September 25, 2016. (Reuters Photo)
by Associated Press
Sep 26, 2016 12:00 am

Bosnia-Herzegovina's state prosecutor says he has opened an investigation into the Bosnian Serb referendum that was held on Sunday in violation of the constitution.

A statement from Chief Prosecutor Goran Salihovic says the case will be treated as a "priority" and certain people will be called for questioning.

Bosnian Serbs voted overwhelmingly in favor of keeping a disputed holiday that a constitutional court had said discriminates against non-Serbs. The court had also banned the referendum organized by the local government in the Serb region of Republika Srpska on the issue.

It asked whether to keep Jan. 9 as a holiday in Republika Srpska, commemorating the day in 1992 when Bosnian Serbs declared the creation of their own state, igniting the 1992-95 war. The court had ruled the date discriminates against Muslim Bosniaks and Catholic Croats in Bosnia because it falls on a Serb Christian Orthodox religious holiday.

During the 1992-95 war — which killed 100,000 people and turned half of the country's population into refugees — Bosniaks and Croats were persecuted and almost completely expelled from Republika Srpska's territory.

The region didn't gain independence after the war, but ended up as an autonomous part of Bosnia.

Bosniaks and Croats who returned there view the holiday as a celebration of their expulsion while Republika Srpska marks the day with religious ceremonies, hinting the region is still meant just for Serbs.

Bosnian Serb leader Milorad Dodik, who initiated the referendum, celebrated the result with thousands of people, fireworks and Serb flags late Sunday in Pale, the wartime capital of Republika Srpska.

"I'm so proud ... of all those who voted today, and I have to say — shame on all Serbs who did not show up at the referendum," he said at the gathering, hinting he expected a higher turnout.

Opposition parties in Republika Srpska claim Dodik scheduled the vote a week before a local election to divert campaign topics from corruption and poverty to nationalism.