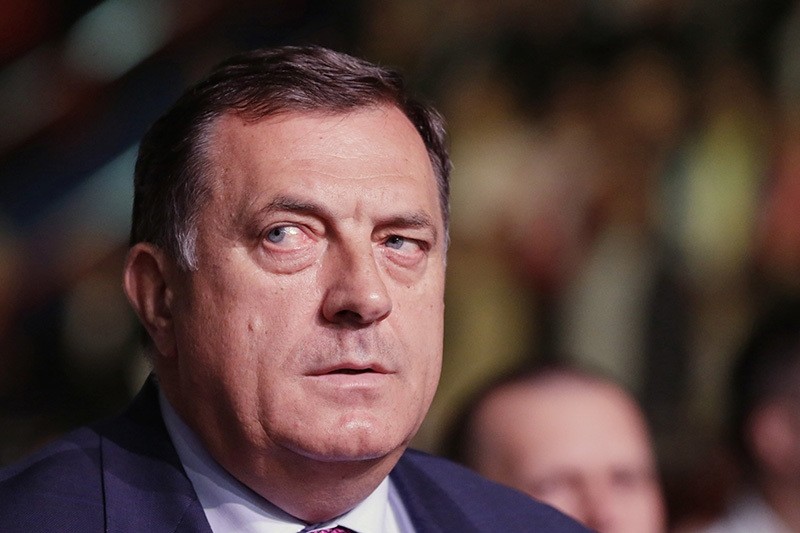 Bosnia is "a failed concept," Serb leader in the Balkans country Milorad Dodik said Tuesday, adding that he "thinks a lot" about a referendum on independence for his Republika Srpska.

The troubled leader has already threatened to call such a vote, which would further undermine fragile institutions established by the Dayton agreement that ended the inter-ethnic 1992-1995 war.

"I do not want to pretend to support a failed concept called Bosnia and Herzegovina," Dodik told AFP in an interview at his presidency in the northern town of Banja Luka.

However, he said he was ready to work "to ensure sustainability of Bosnia as previewed by the constitution."

Today "Bosnia and Herzegovina is a place that nobody wants except few idealists in Sarajevo who want to preserve it," he said, adding that "from a rational point of view nobody benefits from it."

Dodik added that unless a consensus can be found between Bosnia's communities -- Muslims, Serbs and Croats -- the country will disappear.

Since the end of the war that claimed 100,000 lives, Bosnia has been split along ethnic lines into two semi-independent entities -- Muslim-Croat Federation and Serb-run Republika Srpska. They are linked by fragile central institutions vehemently contested by Dodik.

Despite the opposition of the international community, a constitutional court veto and the rage of Muslim leaders in Sarajevo, Dodik last month organised a referendum over Serbs' "national holiday."

The defiant Serb leader won the plebiscite, with almost 100 percent of voters backing the idea, dealing a blow to Sarajevo and the court.

The prosecutor's office in Sarajevo summoned Dodik as a suspect for having organised the referendum, considered illegal after the court ban.

Repeatedly saying that he is ready to give a statement through a video link or in the territory of Republika Srpska, Dodik said he would not travel to a location whose jurisdiction he considers "illegal."

"My roads do not lead to Sarajevo," he said.

"I am a target of Sarajevo Muslims and their politics. I have no link with Sarajevo and nothing attracts me there."

Strengthened by his party's recent victory at local elections, Dodik again brought up the prospect of organising an independence referendum for Republika Srpska.

Dodik acknowledged that just suggesting such an option "could be used against me before a court, because in Bosnia and Herzegovina we do not have the right to think".

Muslim leader Bakir Izetbegovic has accused Dodik of playing with "the red line," 25 years after the war that left some two million people homeless.

He recently likened Dodik to the driver of a vehicle heading "in the wrong direction on the highway, convinced that hundreds of other drivers are wrong" and adding that "an accident is inevitable" unless the dangerous driver changes direction.

"That depends on my vehicle. Maybe I could run over all those driving in reverse, we will see," Dodik retorted, adding that he was "happy to drive in the opposite direction" to Izetbegovic.

"We will either build a Bosnia respecting the will of all, or it will not exist any more. When will it happen? I do not know."

Dodik accused the West of "accelerating the process of disappearance" of Bosnia by imposing its will or sending "third-class ambassadors" there.

They "come to practise here" before going elsewhere, "I do not want to be their guinea pig."