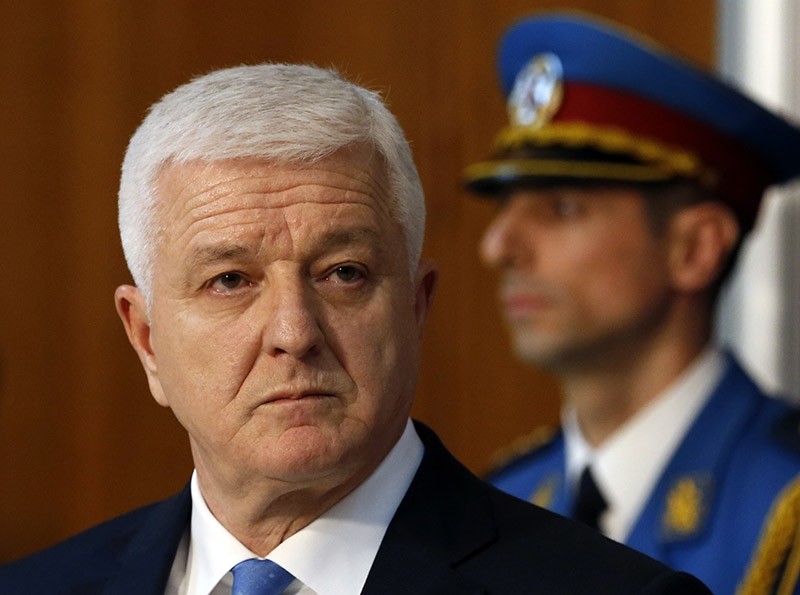 Montenegro's PM Dusko Markovic listens to his Serbian counterpart Aleksandar Vucic, not pictured, during a press conference after talks at the Serbia Palace in Belgrade, Serbia on Feb. 3, 2017. (AP Photo)
by Associated Press Feb 20, 2017 12:00 am

Prosecutor Milivoje Katnic said an investigation into the alleged plot last October to overthrow Montenegro's government and prevent it from joining NATO has shown "that Russian state bodies were involved at a certain level."

"There can't be even talk about any sort of Russian officials' interference into Montenegro's internal affairs," Peskov said. "Russia hasn't interfered and isn't going to interfere into domestic affairs of other countries, and in particular Montenegro with which we have very good relations."

Earlier, Russian Foreign Minister Sergey Lavrov also denied what he described as "unfounded accusations," adding that they "haven't been backed by a single fact."

The Kremlin, opposed to further NATO expansion in Europe, has repeatedly denied involvement in the alleged plot. But it has actively supported nationalist groups opposed to Montenegro's NATO membership.

Some 20 people, mostly Serbian citizens, have been arrested in Montenegro over the alleged election-day plot.

The Montenegrin prosecutor told Prva TV late Sunday that Eduard Shishmakov, an alleged Russian military spy, was the main coordinator of the plot that included taking over of the parliament in the capital, Podgorica, and the killing of then-Prime Minister Milo Djukanovic, who brought the small Adriatic nation to the threshold of NATO membership.

Shishmakov and another Russian operative reportedly coordinated the action from neighboring Serbia using encrypted mobile phones and other sophisticated spy equipment. They were allowed to return to Russia despite Serbian officials' acknowledgment of their activities.

Shishmakov was deputy Russian military attache in Poland before being expelled for espionage in 2014," Katnic said. In 2014 there were several tit-for-tat expulsions involving Russia and Poland but the people expelled were never named.

Katnic said that Shishmakov traveled to Serbia on a passport with another name, Eduard Shirokov.

"So, the passport was given to him by certain Russian state bodies under another name, and he is a member of the Russian military structures," Katnic said. "It is clear that the passport on another name could not have been issued, as well as everything else ... without the involvement of certain (Russian state) structures."

U.S. President Donald Trump's stand on NATO, which he has described as an "obsolete" organization, and his warming of relations with Russian President Vladimir Putin, has worried many in Montenegro and the rest of the war-torn Balkans.