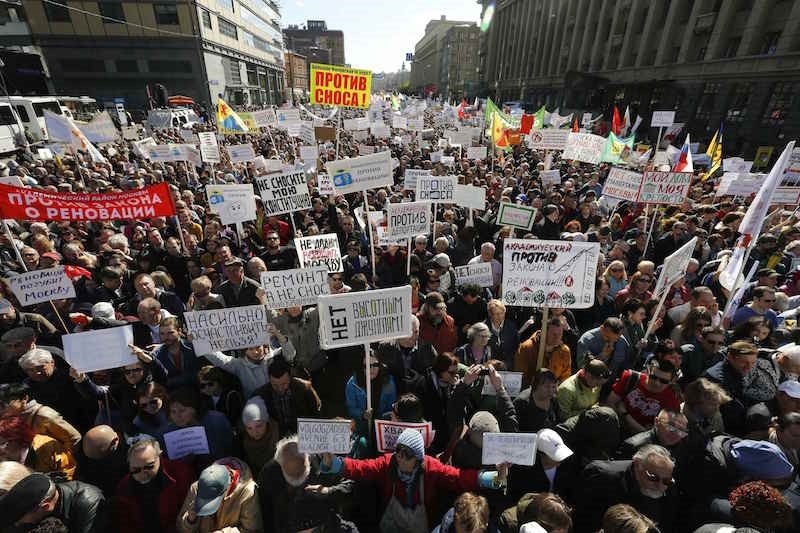 Moscow authorities initiated a vast program to knock down low-rise housing, focusing on the iconic five-story buildings established under Soviet leader Nikita Khrushchev in the 1950s and 1960s. Reuters Photo
by May 14, 2017 12:00 am

Thousands of Moscow residents joined a rally in the center of the Russian capital Sunday to protest against government plans to resettle millions of citizens from shoddy Soviet-era apartment blocks.

The draft law on renovation envisages moving some Muscovites into modern flats but has also fuelled concerns about property rights, a year after city authorities provoked an outcry among small businesses by bulldozing many street kiosks.

Moscow residents are also concerned about the location and quality of the planned new accommodation, a lack of services and infrastructure and about threats the redevelopment may pose to the historic face of the Russian capital.

Organizers put the number of people attending the rally at up to 60,000, or 10 times the number originally agreed with Moscow authorities. Police put the number at 8,000, Russian news agencies said, though their estimate covered a smaller area.

Protesters brandished banners that read 'Hands off our homes' and 'My house is my castle'.

"This draft law must absolutely not be passed, it violates property laws. Tomorrow they'll come and take away your car, your dacha," said one protester, housewife Yekaterina Bizyaeva.

Inna, a child-minder who declined to give her surname, said she had come to the protest to support her children who had recently bought a flat in a now-to-be-demolished five-storey apartment block.

"We've just made renovations for them, and now it will be demolished," she said.

Kremlin critic Alexei Navalny, who hopes to run for president next year, arrived at the scene but was, with his family, sidelined by the police, Reuters witnesses said.

There were no reports of detentions or violence.

Russian President Vladimir Putin, who has dominated Russian politics for 17 years and is widely expected to seek another term next March, approved the resettlement plans but asked the Moscow government to improve the draft legislation.

In the 1950s, the Soviet Union began mass-producing cheap, prefabricated housing to accommodate millions of people who had been living in overcrowded communal flats and even in cellars and dugouts dating from World War Two.

The then-Soviet leader, Nikita Khrushchev, said the apartments, with low ceilings and tiny kitchens and popularly dubbed "khrushevki" after him, would be lived in for no more than half a century. Most are still occupied.