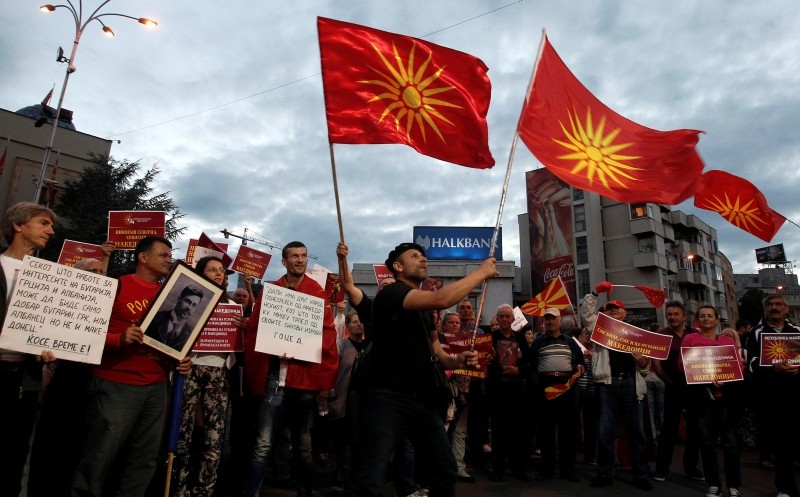 Opponents of the deal between Greece and Macedonia on the latter country's new name ,North Macedonia, hold banners and wave the former national flag, while protesting outside the parliament in Skopje, Macedonia, Saturday, June 23, 2018. (AP Photo)
by Associated Press Jun 26, 2018 12:00 am

Macedonia's conservative president on Tuesday refused to sign off a deal with neighboring Greece for his country to change its name to "North Macedonia," a move that will delay — but probably not derail — the deal, ratified by Macedonia's parliament last week.

Under the constitution, President Gjorge Ivanov can no longer block the legislation if lawmakers meet again and approve it for a second time.

The deal with Greece, agreed earlier this month, was meant to resolve a decades-old dispute dating back to shortly after Macedonia declared independence from Yugoslavia in 1991. Greece argued the name "Macedonia" implied territorial aspirations on its own northern province of the same name, birthplace of the ancient warrior king Alexander the Great, and on ancient Greek heritage.

The agreed solution will require several more steps, including a referendum this autumn in Macedonia, before it can be fully implemented. Hardliners on both sides of the border oppose the agreement, saying it confers too many advantages on the other side.

In a statement Tuesday, Ivanov argued that the agreement is unconstitutional.

He added that the deal "brings the Republic of Macedonia into a position of subordination and dependence on another country, that is, Greece."

The agreed settlement has caused a major rift between Ivanov and Macedonia's left-wing Prime Minister Zoran Zaev, who has staked his political future on the deal going through — a first step that would allow his country to start accession talks with the European Union and NATO.

Zaev has indicated that he will try to use parliament's power to remove the president from office, forcing presidential elections within months. According to Macedonia's constitution, a two-thirds majority of 81 votes in parliament is needed for that. Zaev would have trouble raising that majority.

Normally, Ivanov's second and last term in office would expire in April 2019.

Macedonians will be called on in the autumn to vote on the name-change deal in a referendum. If that backs the agreement, lawmakers will have to amend the constitution to formalize the name change. Once that is done, the deal must be ratified by Greece's parliament to come into effect.

Zaev said in an interview with local television late Monday that he will resign if the referendum rejects the deal.

"Yes, I will leave if the referendum fails, but I am sure it will succeed," he said. "The people have ... no other alternative."