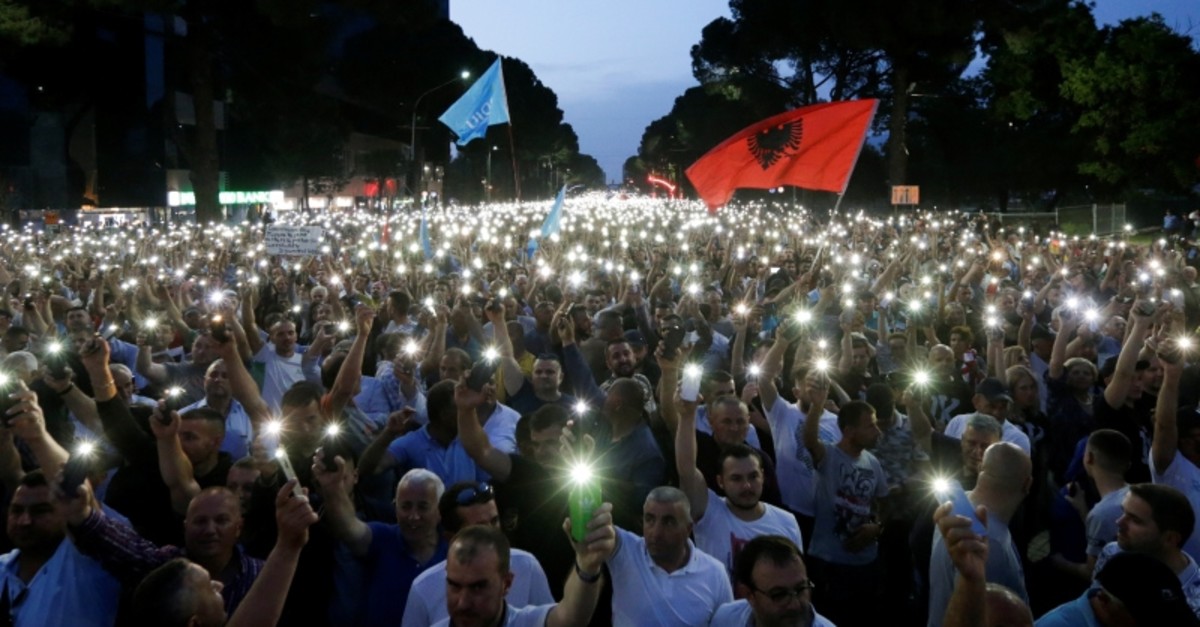 Opposition supporters use light from their cellphones during an anti-government protest, calling on Prime Minister Edi Rama to step down, in Tirana, Albania, June 8, 2019. (Reuters Photo)
by Compiled from Wire Services Jun 09, 2019 6:37 pm

The announcement put Meta and Rama on a collision course, the latest development in a political crisis that has spilled onto the streets with weekly protests demanding Rama's resignation shrouding Tirana in tear gas.

"Current conditions do not allow for fair and democratic elections to take place and undermine any possibility of opening accession negotiations with the EU," Meta said in a letter released by his press office.

Prime Minister Rama hit back while on a visit to the south of the country, pledging to plow on with the ballot.

"The elections will be held on June 30 and the socialist majority is determined to carry through the reform of justice crucial for Albania's European future," he said.

In February, opposition politicians from the right to the center-left walked out of parliament in a protest demanding the resignation of socialist Rama, who has led the country since 2013.

They want a transitional government and early elections, and refuse to negotiate with Rama whom they accuse of crime and corruption links.

Leader of the opposition Democratic Party Lulzim Basha told thousands of supporters in Tirana on Saturday the president's decision was the "first result of our battle against Edi Rama and will continue".

Rama's departure was "non-negotiable" he said, despite calls from the international community for Albania's political parties to engage in constructive dialogue and refrain from violence.

The protesters then headed for parliament where police used teargas and water canon to disperse them.

This conflict between Meta and Rama deepens the political crisis in the Balkan country, which is waiting for a date to start EU accession negotiations.

The constitutional court, which would be responsible solving such disputes, will not be able to remedy the situation: It has not had a quorum for more than a year.

Early last year, a commission began investigating the country's judges and prosecutors for the origin of their assets and for possible links to organized crime. Several judges of court have since been dismissed or have resigned.